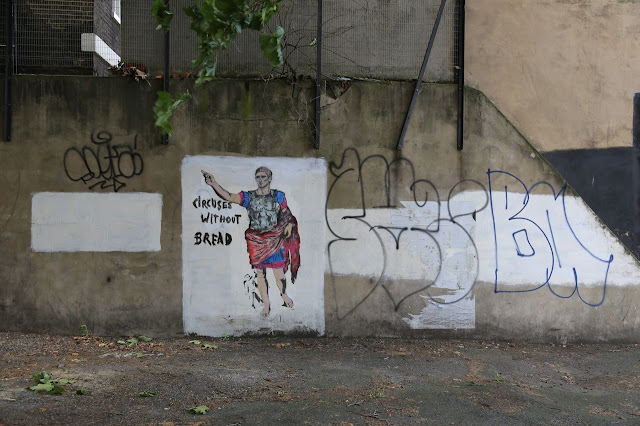 Dave and I are finally catching up on some of the political convention speeches. We haven't seen Obama's yet, but we watched Michelle Obama and Bill Clinton on YouTube last night.

Then, for the sake of balance, we watched Mitt Romney and Paul Ryan. (We tried to watch Rick Santorum but we just couldn't stand it.)

Now, I ask you -- how could the choice be any more clear? The Republican convention (lily white, by the way) seemed cheerless and flat. There were empty seats. There was a background hum during the speeches that sounded to me like people talking, maybe about their next trip to Chick-Fil-A. There was just no energy in that room -- particularly when Romney spoke. Say what you will about Paul Ryan and his penchant for inaccuracies (I'm being nice and not calling them lies) -- he can at least give a speech. Watching Romney is like watching your high school principal at an assembly. 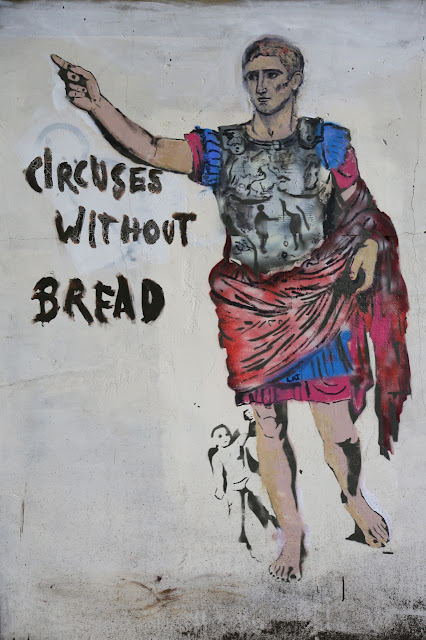 Michelle Obama, on the other hand, was a moving, forceful, graceful speaker -- like Jackie Kennedy with more substance. And Clinton! Holy mackerel. That guy could have gone on forever. Here he was talking about the nitty gritty of deficits and medicare and I was enthralled. I didn't always agree with him as president, but I sure do miss him. And I don't mean to dwell on mere showmanship -- I haven't seen a bunch of news articles about inaccuracies in his speech.

And let's talk about the energy in that room. The demographics of the party were on full display -- blacks, whites, asians, Hispanics, you name it. Everybody was there, and everybody was cheering and nodding and participating. I did not get the feeling of forced enthusiasm that seemed to pervade the room at the RNC in Tampa.

(Photos: Street art on Old Kent Road in South London. According to Wikipedia, the common phrase "Bread and circuses" is "a metaphor for a superficial means of appeasement. In the case of politics, the phrase is used to describe the creation of public approval, not through exemplary or excellent public service or policy, but through diversion, distraction and/or the mere satisfaction of the immediate, shallow requirements of the populace." As the street art points out, some -- Romney and Ryan, I would argue -- have even sacrificed those shallow requirements.)
Posted by Steve Reed at 6:42 AM