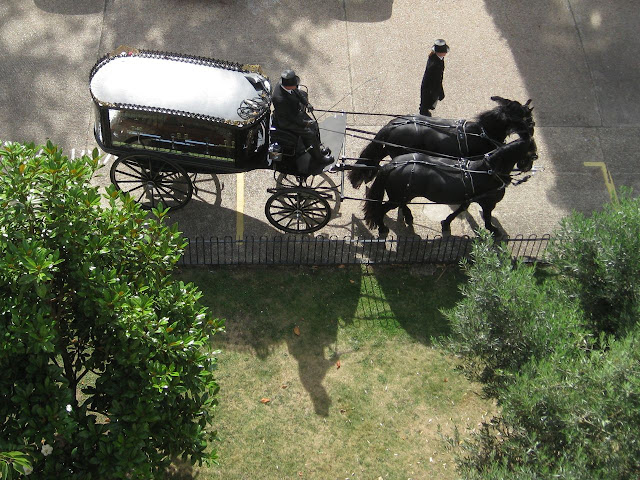 We had some unusual goings-on in the neighborhood yesterday -- a funeral procession!

I'd heard more than a week ago from our next-door neighbors that a man in another part of our complex had died. He was no one I knew. I'm not sure I'd even seen him before. At any rate, I suppose that's who the services were for yesterday. 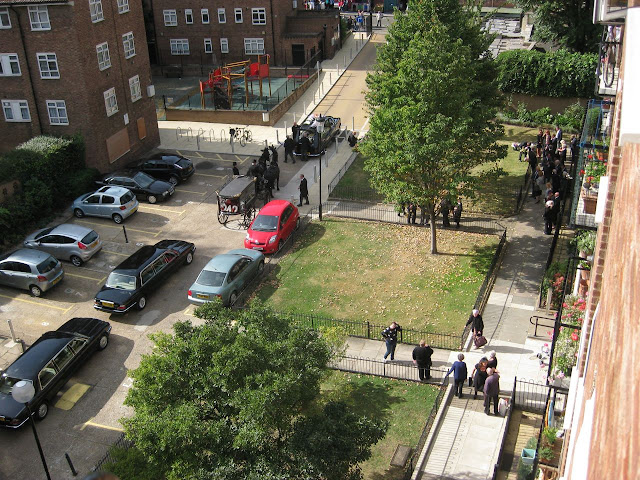 I was working in our flat when I heard the clop-clop of horse hooves. I thought maybe the horses were back -- but no, these were different horses, clop-clopping up the side street and turning into our parking area with a hearse in tow. They attracted a great deal of attention from the tourists on Portobello Road.

Behind the horse-drawn hearse, which already contained the casket, a line of empty black cars pulled up. A group of my neighbors, mostly in black, stood outside the building near a few dozen bouquets spread on the grass. The drivers collected the chrysanthemums and gladioli and loaded them onto the first car in the procession. 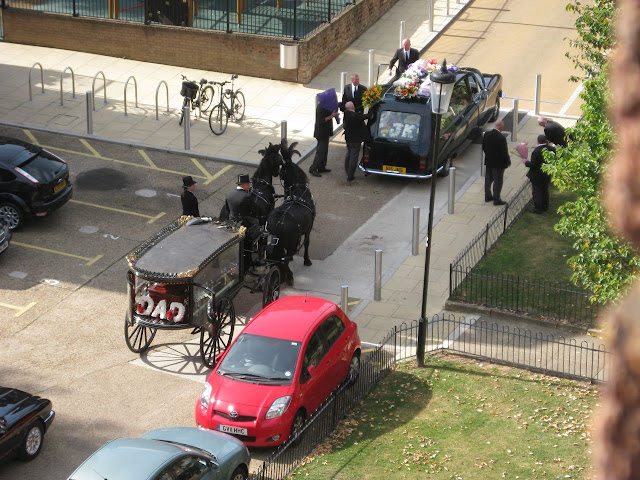 Meanwhile, everyone else climbed into the rest of the cars, and soon enough, off they all went, down Portobello Road. I suppose it's not much different from your average funeral procession in the U.S. -- except for the plumed horses and the carriage with its top-hatted drivers, which gave everything a sombre Victorian air.

-- Hours after I posted my Star Trek entry, Mike, Sally and I also watched a few episodes of the old animated Star Trek series, which ran on Saturday mornings in the early '70s. I remember watching it as a kid, and in particular I've always remembered an episode in which the Enterprise flies into an alternate universe, where space is white and the stars are black. Neato! We found that 1974 episode and watched it again. It's a much better show than you'd think for a cartoon, with some of the same writers as the original series and all the original actors doing their characters' voices.

-- Little London Observationist posted a slew of my London storefront photos yesterday, and they're scheduled to use another of my photos tomorrow. Sweet!
Posted by Steve Reed at 6:06 AM