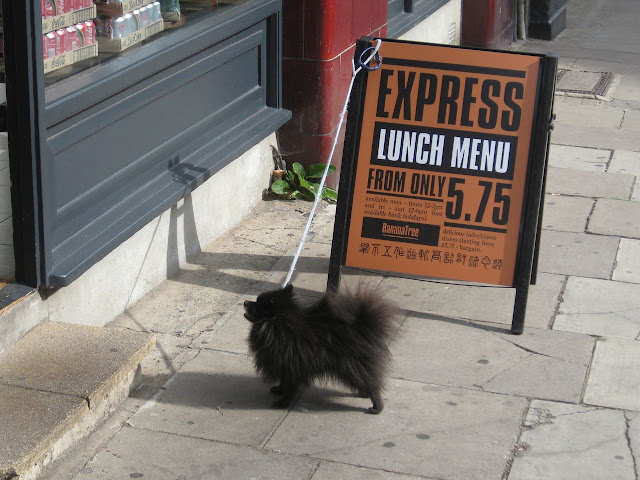 I spent last night with my friend Sally and her family, in the south London neighborhood of Charlton, near Greenwich. Ever since Dave and I learned that her husband Mike is a big fan of Star Trek, we've intended to have a Trek-viewing evening. We finally pulled it together last night, and then Dave went and got sick on me at the last minute, so I came down by myself. Sally, Mike, their daughter Sorren and I watched four episodes while noshing on a yummy stew of rabbit and venison. (Not particularly Treklike, but then, what food would be?) I stayed over, and now I'm sitting in their quiet living room, typing away while one of their cats purs and rubs his cheeks on the corner of my computer screen. (Maybe he usually gets fed in the mornings? He's being annoyingly attentive.)

I won't bore you with the particulars of the Trek episodes we watched. I'm a fan of the original series, so we focused mainly on that. Indeed, if there's any upside to Dave's absence, it's that I only had to sit through one episode of Next Generation. (It was about the Borg, so that made it more or less OK -- and I kind of fell asleep anyway.)

Getting down to this part of town was interesting. For some reason, the London Underground people decided to shut down several of the tube lines this weekend. So I had to go a sort of roundabout way using a light rail network and buses, which took about an hour and 45 minutes. Then I had a manic bus driver who seemed to have overindulged in PCP, speeding through the streets, smashing the wheel into the curb at bus stops and visibly alarming the waiting passengers. I was glad I got off in one piece!

Today, brunch this morning and then back to Dave in good old Notting Hill.

(Photo: Fluffy waits patiently in Maida Vale.)
Posted by Steve Reed at 8:10 AM