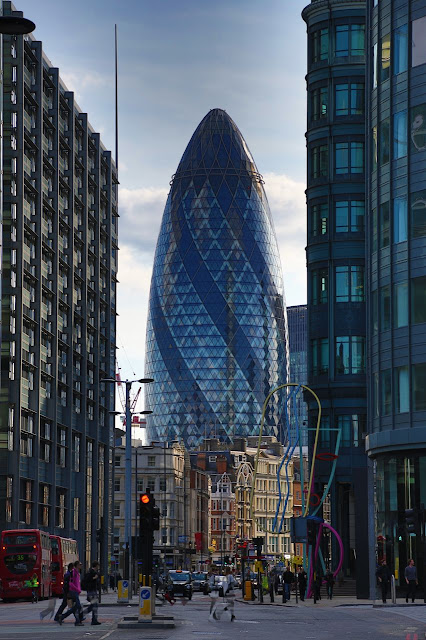 This is the view looking south on Bishopsgate from Shoreditch, at Sir Norman Foster's famous 30 St. Mary Axe, better known as "The Gherkin." Isn't it a great building? I'd love to see it from the inside, but from what I understand there's no regular public access. Someone needs to open up a cafe in that nose cone.

The rainy weather continued yesterday, and I had a blessedly low-key day. I did the laundry and a few work-related tasks, but mostly caught up on my New Yorker magazines. I enjoyed Salman Rushdie's account of the changes in his life that followed the publication of "The Satanic Verses" in 1989 and the Iranian fatwa that followed. The article was especially appropriate given all the recent outrage and violence in the Muslim world over that terrible YouTube video. (Not that I am suggesting the video is culturally comparable to Rushdie's book.) I'm thinking now I should read "The Satanic Verses" -- I never tried it because some critics didn't take kindly to it, and the consensus seemed to be that it wasn't that good. But if I'm still curious more than 20 years later, that says something, doesn't it?

I also had a good long conversation with my mom via Skype, in which she filled me in on the neighborhood plane crash. Yes indeed, there is no end to the excitement in Pasco County, Florida. Turns out it wasn't much of a spectacle, though -- it happened way out in a pasture and even though Mom lives fairly close to the scene, she heard and saw nothing.

In the evening, Dave and I tried to watch "Dexter," having exhausted our supply of "Breaking Bad." I did not like "Dexter," not even a little bit. People have raved about it, but I found it way too bloody and creepy. Maybe I simply haven't cultivated the appropriate level of ironic detachment -- but at this point, I think I'll skip it.
Posted by Steve Reed at 6:17 AM