Dave and I braved the hordes at The Louvre yesterday, in order to get some face time with Mona Lisa, the Venus de Milo and the Winged Victory of Samothrace (among others). As you can see, Mona was thronged, as usual. It's kind of an extension of our culture's celebrity worship, isn't it? Out of all the 35,000 artworks in The Louvre, it's funny that we've settled on just one as the absolute must-see.

And that's as close as I got.

We spent several hours at the museum, wandering through the Italian and other European painting sections, gazing at Albrecht Durer's self-portrait and works by many French artists, like Poussin, that I barely know. (The galleries containing Vermeer's lacemaker were closed for some reason. Sacre bleu!) We also went to the African and Pacific Island rooms, where we spotted this character from Hawaii. 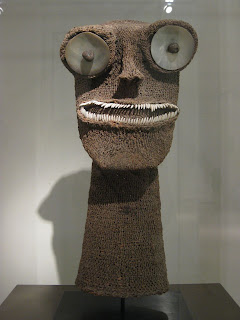 He's a good antidote to the toothless man banging pots that we encountered on Wednesday, isn't he? And aside from the teeth, he's wearing approximately the same expression.

Dave and I got separated at one point and I despaired of ever finding him again. The Louvre really is incredibly vast, and so crowded. But we both instinctively went back to the grand entrance foyer beneath I.M. Pei's glass pyramid, and somehow I spotted him amid the mob.

Last night we had dinner at Le Meurice, which Dave chose from among all the restaurants in Paris as the one for our special meal. It was stupendous, no question. We both got the tasting menu with wine pairings and I have never eaten so well -- pigeon, asparagus with caviar and other dishes simply too delicate and complex for me to describe.

We have also never paid so much for a meal. Holy cow. I have to remind myself that food is Dave's passion, and this is the equivalent of him buying a fancy camera lens. If I can do it, so can he!

We'll be back on the train to London this afternoon, to be reunited with Olga this evening. We keep joking that the folks at the kennel have probably locked her in a crate, she's such a wild thing. We'll all be happy to see each other, I'm sure.
Posted by Steve Reed at 7:04 AM