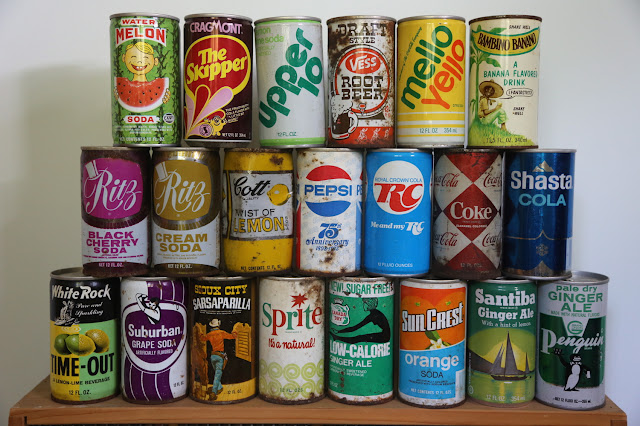 I've written before about my beer-can-collecting phase in the early 1980s, when my siblings and I scoured the roadsides of suburban Tampa for old and interesting cans. I collected cans for years before selling my collection in 1984, just before I went to college.

At the same time that I collected beer cans, my younger brother collected soda cans. Unlike me, he kept his collection, which still occupies 20 cardboard beverage flats in a closet at our mom's house. (That's about 480 cans.) Many are from the late '70s and early '80s, and some are older than that.

I looked through his cans yesterday, and was struck by the incredible variety. There are store brands, regional brands and national brands. Grape soda, orange soda, cream soda, cola, lemon-lime sodas, diet sodas and juices. There are cans of every make and model. Some have pop-tops, some have pull tabs, and some required a can opener. Some suffered from weeks, months or years in a ditch or forest before we found them; others we bought new and drank.

I'm pretty sure I drank that Santiba ginger ale in the photo above on one of our family trips to Maryland.

I got to wondering what ever happened to all these brands. It turns out that many of them are still around. RC is still extant; so is Ritz. White Rock is based in New York and still churns out flavored sodas of all varieties. Mello Yello apparently still exists as a brand owned by Coca Cola, which launched it in the late '70s.

Suburban, which was a Baltimore outfit, seems to be kaput.

While it's encouraging that many of the brands have managed to hang on, the diversity in today's soft drink industry is an illusion, as these researchers found. Three firms -- Coke, Pepsi and Dr. Pepper/Snapple -- control 89 percent of the American soft drink market, under many different constellations of brand names. RC, for example, is owned by Dr. Pepper. 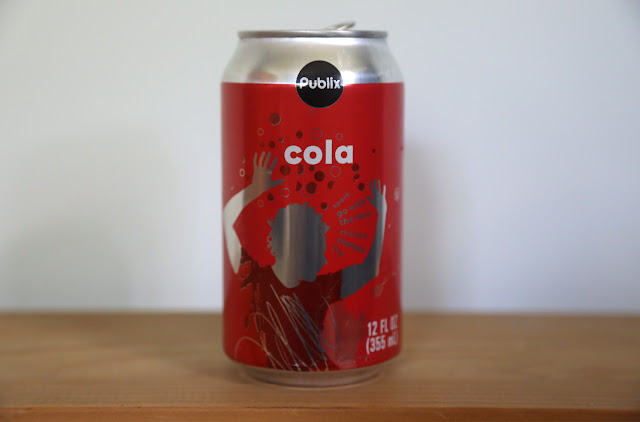 I can't speak for my brother, but cans appealed to me because of the artwork. I liked the typography and the colors. I liked the graphic design. When we were collecting, I didn't really think about the larger possibilities or career potential in design -- I just knew what I liked.

My brother plans to keep his cans -- at least the ones with collectible or archival value. Doesn't it seem likely that there aren't a whole lot of Cott Twist of Lemon cans still around? Even if his does have huge dents, I could see how it might be worth saving.

I still notice design on cans. Just the other day I was admiring the current version of the Publix cola can. Pretty jazzy!
Posted by Steve Reed at 10:53 AM

Are you enjoying Publix?

There are many in this collection that I've never heard of before but, I do like the look of that old Coke can and I have fond memories of Shasta.

That is such a cool collection! They are all art and very well designed- the Publix one is fun and makes me want it...the point , I guess , however, my eyesight is tricky - I read "pubix"...which may not sell well.

I have a fine set of cans.

I will have a totally different perspective the next time I travel down the beverage isle of Shop Rite! Very cool and fun but watermelon and banana? A great collection!

Do you have more photos of soda cans? I'd like to share your pics on my website, which is just my fan site for soda and soda fountains.

Please contact me when you have the opportunity. Thank you.

Tom, I'm not sure how to contact you -- but sure, you're welcome to use my photos. These are the only ones I have, though since I wrote this post my brother has moved his can collection into his garage and displays it on shelves -- so all his cans are now visible!

Thank you, Steve! I'm sorry about the anonymity--I don't know why the Google Account just shows me as "Unknown." It has my gmail address, but "Unknown" for some reason.