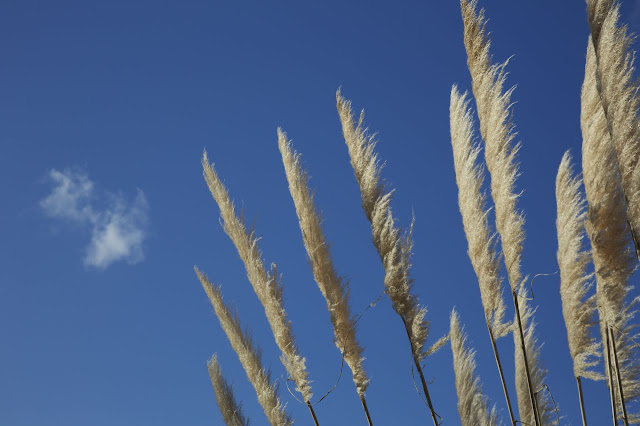 Our Brugmansia, which you may remember bloomed just a few months ago, has a very persistent case of red spider mites. We've sprayed it thoroughly a couple of times with an organic bug spray, to no avail. It's dropped almost all its leaves and recently passed the mites to the dahlia that Olga nearly destroyed a few weeks ago -- so now that plant is not only ragged from the dog, but its leaves are shriveling.

Dave, the gardening maven, was never all that impressed with the Brugmansia blooms, and the dahlia was a free gift from a nursery when we bought some other stuff.

Meanwhile, our frost-nipped hibiscus also has some pests and has dropped most of its leaves. And finally, we have another potted plant that we think is another Brugmansia -- I found it in the trash at a house down the street -- but it's never really grown or done much and it doesn't look great either.

So we put them all outside. We're going to let winter take its course. Time to start fresh.

That leaves us with just the avocado tree, the venus flytrap and an anthurium at the back door. I'm really hoping those mites don't somehow make their way to the avocado. I'll resort to the nuclear option (pesticide) if that happens.

We haven't done anything in the garden for weeks now. We probably ought to get out there and clean up some of the "winterkill" (to use a word I learned when I was on the board of my co-op back in New York City). But we want to let things go a bit, to give the critters winter cover and allow the plants to disintegrate and re-nourish the soil. Besides, we haven't had a hard freeze yet, so some of them are still doing their thing.

(Photo: Grass plumes in St. John's Wood, on our one sunny day last week.)
Posted by Steve Reed at 6:48 AM

Mum's hibiscus lost all its leaves and she was going to throw it out, but when she tried to pull it from the pot, it's root system hung on tight so she put it I a sunny spot outdoors away from the wind and it has now sprouted a lot of lovely bright green leaves. See if you can find a similar place on a porch or similar. I know your winters are worse than ours in Australia, but give it a chance.

Every spring I "give up" on a few plants but let them be and still water them and they generally come back. Some take months. My determination depends on how much I cherished the plants. But I am prepared to let them go if they never do come back. They are simply plants and there are plenty more.

I wouldn't think the angel trumpet would make a good house plant. in the ground it will freeze down but will return when it warms up though it may not survive in the pot. they get quite tall and large down here when we have mild winters. and it's best to leave the gone by stuff in the garden til spring as it provides protection. you just need to learn to love that stage as well.

I think you will find that if you replace your house-plants with artificial plastic lookalike plants red mites will not be a problem and you won't have to worry about watering either. See http://www.bloomingartificial.co.uk/

Will be interesting to see what this mild European winter will do to your discarded plants.
They may florish after all.

I'd be surprised if the mites go for the avocado, which is a really tough plant. We had a few of them (grown from stones the way all good aging hippies do) that grew into monsters of large dark leaves and pretty much nothing else, unkillable even in dark staircases etc.

I stopped accepting them as houseplants when I saw real avocado plants with actual blossoms and fruit - our home grown ones lost all purpose and suddenly looked pretty ugly.

Gardening is like a diet
Best started on jan 1st

That reminds me, we have a couple of plants that need tossing onto the compost heap! Cats. Need I say more.

Who would believe that photo was taken in London in mid-December?

JennieB: Thanks for the input! The hibiscus is in the sunniest, warmest part of the patio, so it may survive if we have a mild winter. (It may freeze to the ground, but that wouldn't be so bad -- it would kill the pests, whatever they are, whiteflies or something.)

Ms Moon: Yeah, we probably overestimate the need for our involvement in our plants' survival, at least in the short-term!

Ellen: When Dave bought it, the nursery claimed it could live in the garden. But we found that the slugs LOVE it, so he moved it inside, and it did OK for a while but those mites have just done it in. I think you're right -- it's not an ideal potted plant. I've seen them in Florida get as big as a house!

York: THAT'S THE ANSWER! THANKS!!

Sabine: You may be right about the avocado's durability, because so far it seems completely unaffected. I grew up around avocado trees in Florida, so I have a soft spot for this one, even though it's not quite the "real thing." :)

Ms Soup: As I said, it was an atypical day! I wish I were in sunny southern France right now. :)