Garden Cocktails, and the Voyeur Motel 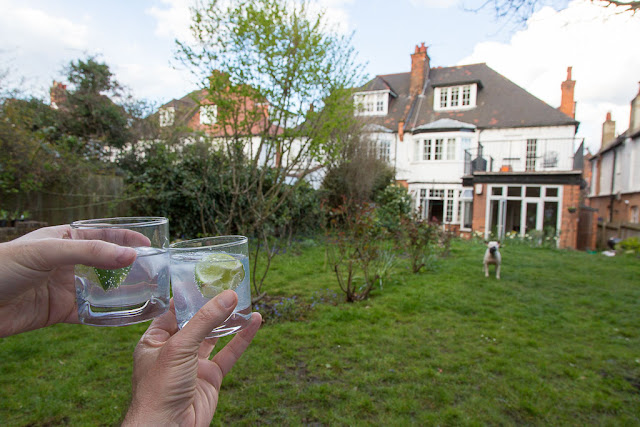 When Dave and I came home from work yesterday, the sky was sunny and blue, and the evening was warm enough to open the windows and air out the house. We made tonics and went to sit on our back garden bench. Yay, spring! (Olga could not understand why we weren't playing Kong with her.)

In fact, it was a beautiful day overall. I went to Ladbroke Grove to get blood drawn for my follow-up doctor's appointment -- my "health check," as they call it, when they review my cholesterol levels and that sort of thing. Of course, Dave made a big shrimp salad for dinner the night before, so my cholesterol was probably through the roof.

It's funny: I scheduled the blood draw as quickly as I could after leaving my doctor's office last Thursday -- in fact, I called while standing on the sidewalk outside his door -- and the quickest the lab could fit me in was yesterday at 11:55 a.m. And yet, when I showed up, no one was there. The waiting room was a ghost town. "Lots of people have missed their appointments," said the attendant.

I bet if I'd simply walked over there from the doctor last Thursday they could have fit me in right away. If they allow that sort of spontaneity. Who knows how these things work?

Anyway, the day was so beautiful that after the blood draw, I went walking along Portobello Road with my camera, taking a circuitous route back to the tube. I got a handful of pretty good photos, I think, but I wasn't super-inspired. I photographed that area so much when we lived there that I'm sort of burned out on it!

On another subject entirely, have you read the New Yorker article about the Colorado man who bought a motel back in the 1960s expressly so he could spy on his guests? He cut holes in the ceilings of the rooms so he could peer down on them, in the name of pseudo-scientific "research" as well as his own gratification. This went on for decades. It's a fascinating piece, one of the best things I've read in the magazine in a while -- and it's written so well (by Gay Talese) that you come away feeling some shocked understanding, if not quite sympathy, for the voyeur, as alarming (and criminal) as his behavior was. Talese gets beyond the repugnance of the acts in order to explore his motives. (Of course there are tons of ethical questions here, as addressed by others.)

A coworker at school told me about the article last week, and as I read it I mentioned it to my boss, who's also been reading it, and we had a lively discussion. A sure sign of good journalism -- when it prompts water-cooler conversations! (I was then a little annoyed when my boss assigned me a task in the afternoon that prevented me from finishing the article, even though I had less than a page to go. Argh!)

Another subject of work discussion: This gizmo at Time magazine, which shows you what your name would be if you were born today. This is based solely on the popularity of your name -- for example, my name, Stephen, was the 26th most popular boys' name in 1966, the year of my birth. Today I would be named Carter, which is the 26th most popular name. In 1910 I'd have been named Elmer. (God forbid!)

Of course, this assumes that our parents chose our names based solely on their ranking, which I'm pretty sure is a flawed conclusion. But still -- it's fun.
Posted by Steve Reed at 6:53 AM