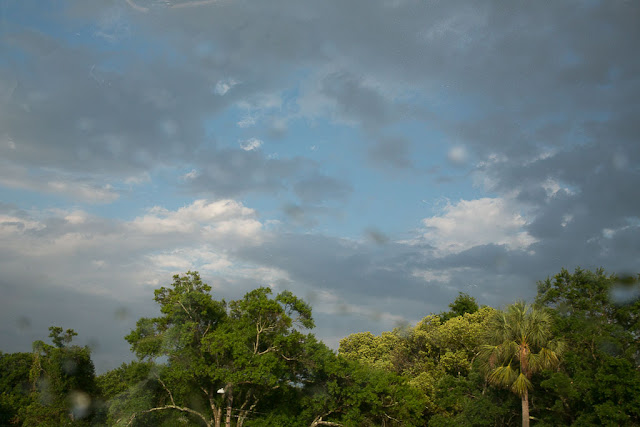 You may be looking at that photo, taken out a rain-spattered car window, and thinking, "Gee, that doesn't look like England."

I know, I know. Dave is sick, and about to have surgery, and no doubt it seems like I chose the worst time in the world to suddenly fly across the ocean. But that's because I didn't really choose it. My dad's brain chose it.

I got a text from my stepsister late Tuesday night saying my dad was in the hospital. He'd been feeling numb on his left side for a while, but he wouldn't go to the doctor before his regularly scheduled appointment this week. Well, the doctor admitted him right away. A stroke was initially suspected, but we've subsequently learned that my dad has small lesions on his brain, including one that is surrounded by a fluid-filled cyst that is exerting pressure on his cerebellum and affecting his balance.

The nature of these lesions is not exactly clear. But surgery is required to remove the cyst, and that will occur this morning.

My dad is 79 years old, so brain surgery is not a minor thing. I talked it over with Dave, got online at 3 a.m. Wednesday morning and bought a ticket. I made arrangements with work, and now I've joined my stepmother, brother, stepbrother and stepsister to help see my dad through.

I'll then return to England on Sunday, arriving Monday morning, a few days in advance of Dave's surgery next week. He should be fine in my absence, as he's basically just in a holding pattern. I've asked some coworkers to look in on him.

When it rains, it pours -- and sometimes it just keeps on pouring. 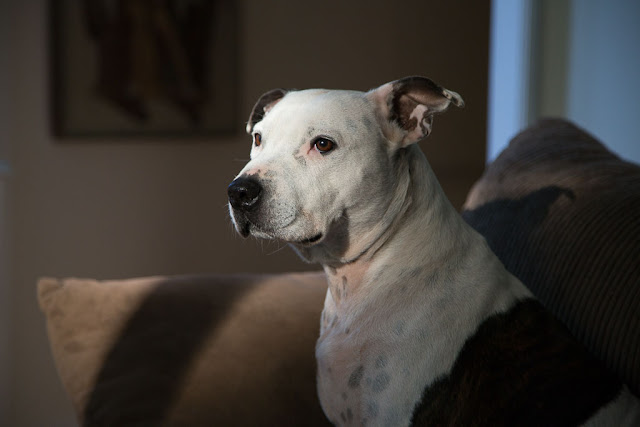 Let's have a photo of Olga, perfectly lit on Tuesday by the afternoon sun, to cheer us up.

Yesterday on my flight I got a beef cottage pie for lunch. Among the listed ingredients: fish. I cannot begin to imagine why beef cottage pie would contain fish. Cowfish, maybe?
Posted by Steve Reed at 9:09 AM