A Lion and Four Foxes 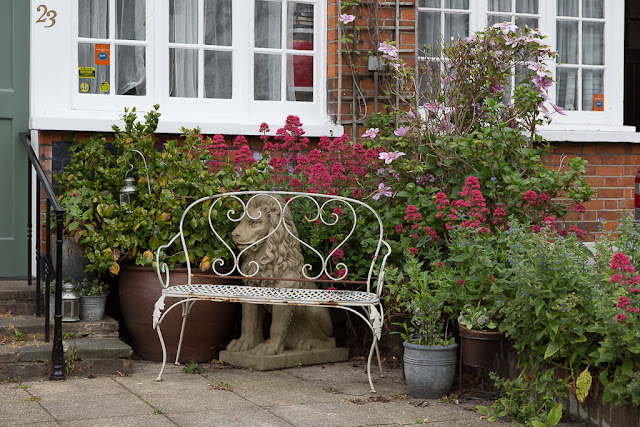 Does this lion look familiar? It lives just down the street from us, the companion to this one. It sits just on the other side of the doorway. These people get my vote for the most interesting front garden on the street -- they even beat the woman in the bathtub.

(Speaking of which, I recently learned that the bathtub house belongs to this semi-famous person, mother of this famous person, who lives across the street. I knew they were our neighbors but didn't connect them with the bathtub!)

Dave and I are trying out some new evening entertainment. We recently started watching "The Wire," which I've heard about for years but never saw. I like it, but Dave isn't such a fan -- and I concede that it can be hard to follow. Still, I think I'm hooked.

Last night we gave "Game of Thrones" another try. You may remember that we didn't like it the first time around, though apparently (or so I wrote) that was partly because of the extortionate price. We got a better deal this time, and I recently learned (spoiler alert!) that the boy thrown from the tower in the first episode -- the scene that so bothered me when I first watched it -- doesn't die. So that made me feel better. 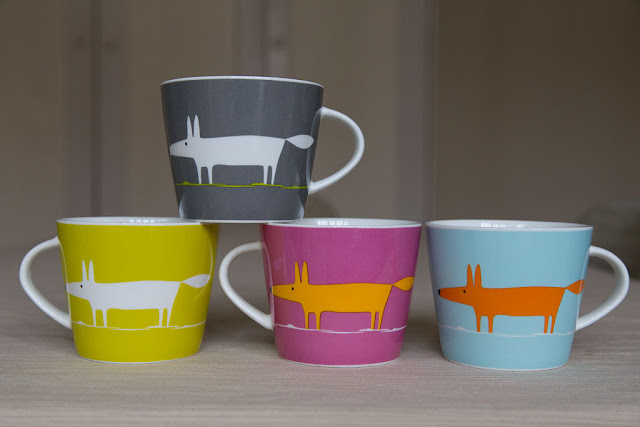 Last night on my way home from work I popped into our local cookshop on the high street and bought these four cups. I'd seen them hanging in the store window and really liked them. (When I told the guy behind the counter that, he said, "Aha! It worked!")

At the risk of boring you with the minutiae of my life, I've been tired of our mugs for a while now -- a collection of Starbucks mugs from Florida, mostly. I wanted something more relevant to our lives here in England. These fit the bill, don't you think? Sometimes you just have to shake things up -- and fortunately, for me, shaking things up doesn't require very dramatic change!
Posted by Steve Reed at 6:43 AM

Buying those dog cups on your own - that's how to ignite marital rows.
"Do you like the new cups Dave?"
"No I damn well don't Steve! I would never have picked them. We should be choosing mugs together. There are two people in this marriage Steve!"
"Okay, I'll take them back to the cookshop."
"Good! Then we can order some new mugs from the Hull City A.F.C. online shop. They will be much nicer."

I am considering watching Game of Thrones but as my clever daughter pointed out to me yesterday, there are an awful lot of episodes to watch until you can catch up with me Mum.
Must not spoil her enjoyment of being ahead and beyond me.

I LOVE the cups! The colors are wonderful!!!

I have listened to the audio version of all of the GOT books and enjoyed them tremendously. But I can't stand the series on HBO. I am not sure why.
I am sure, though, that I like your cups very much.
You have famous neighbors! That's sort of very cool.

You have some very creative front yards. These would be eyecatchers.

The fox coffee cups are quite nice. I've been thinking about purchasing a new coffee mug for myself. The problem is, what kind? Coffee cups/mugs are very personal. You seem to just have to happen upon them.

The bathtub lady, not my style. A rake and some pruning shears would do a lot to make that scene more pleasing to the eye. The bicycle with the lions needs some attention, something to perk it up. As it is it just looks abandoned. Good potential but needs a little somethings. As if anyone cared about my opinion.

I do love the way you shake things up! It's a gift that small changes bring great satisfaction. The cups are very cool. Somehow I missed that bathtub post last year, I think I was traveling. It's kinda creepy, i think. It's always interesting visiting your corner of London, though.

The cups are cute. BTW, the semi-famous person to whom you refer is actually quite well known to anyone outside American television and movies as are both of her famous daughters.

you are a very modest shaker up of things. The mugs are hip and awesome in their design, your neighborhood is gorgeous so little wonder that gorgeous people live there.

London foxes look very different from Yorkshire foxes - that's for sure. They must be mutants.

I find it somehow disturbing that the aforementioned semi-famous person has that bathtub in the front garden. It just doesn't seem to fit the personality of the character's I've seen her portray. I love the cups. They have a sort of mid-century modern look to them. You named two shows that I've never watched. On the other hand, I started watching West Wing on Netfix. I loved that series when it aired and when I decided to watch it again, I was afraid it might seem dated. However, every episode I've watched so far is just as relevant today as they were 15 years ago. (With the possible exception of the antique cell phones.)

I read all the GOT books, well, all the ones he's WRITTEN, before the HBO series. we watched the first season because my sister had the discs but haven't followed up with the others. I'll have to see if she has them as well. the mugs are nice but I use cups for my coffee.

I love those mugs, but I thought those were dogs on them, too! (as much as it pains me to agree with YP :p)

I checked out the lady in the bathtub since I wasn't reading at that time, and have to say it's kind of creepy ... I don't like anything to do with people being buried in dirt. Watched too many forensic shows, I think!

What a nice find! So pretty, artistic and stylish.