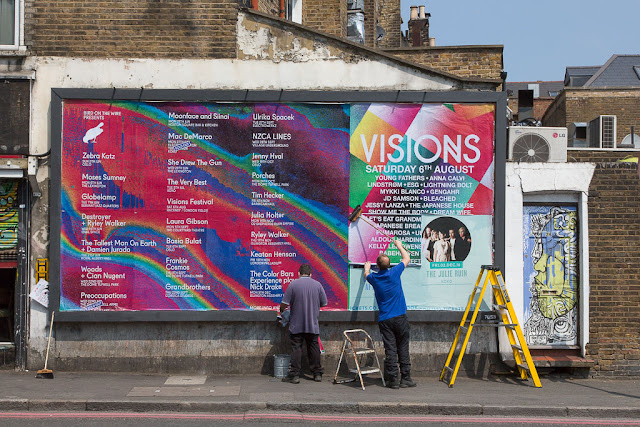 I did get out for a photo walk yesterday, the first I've taken in weeks. Since I came back from Florida at the beginning of May I haven't had a chance to do any urban exploring, and it felt good to just get out and wander. The weather cooperated and I saw lots of colorful scenes, like these guys putting up this billboard for an upcoming music festival.

(Seeing that band called "Let's Eat Grandma" reminds me of one of my former editors in Florida, who used to get such a kick out of silly band names. We once mentioned one in the newspaper called "Big White Undies" and he laughed about that for years.)

I went to Highbury and Stoke Newington, in East London. Lots of good shots. 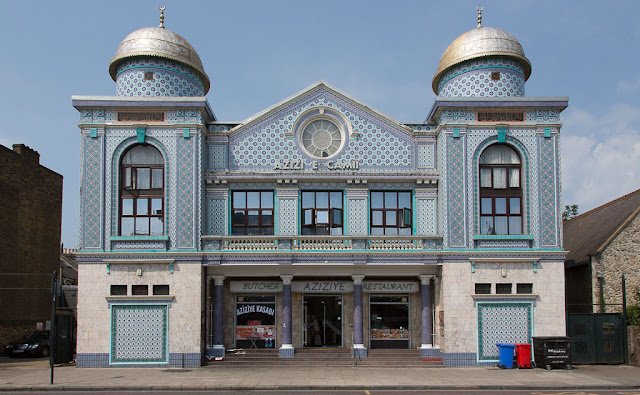 This is the Azizye Mosque, a Turkish religious center that used to be an old cinema. According to Wikipedia, several decades ago it was showing martial-arts and softcore sex films. The building was upgraded to a mosque in 1983, and now its crisp blue-tiled facade definitely stands out on the high street. 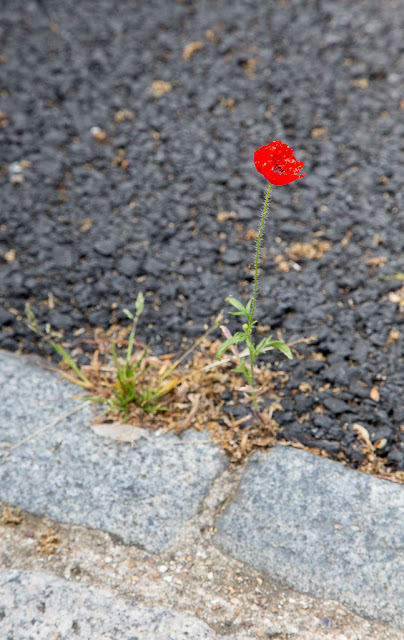 I also came across this tiny red poppy growing, literally, in the street. Nature is amazing, isn't it?

After walking a couple of hours in the morning I came home and helped Dave do some minor stuff in the garden, and then I cleaned the house. I scrubbed all the kitchen counters and cleaned the bathroom and vacuumed the floors. I just put on my iPod and went to town, and I had a great time. Music makes all the difference when there's work to be done! (As Snow White reminded us -- though our birds and rodents, for some reason, are much less cooperative than hers.)
Posted by Steve Reed at 6:32 AM

I frequently use Pandora as a backdrop when cleaning...makes things go faster and is more fun...As for unusual band names, OCD or Orgasmic Chocolate Dream, is one that springs to mind...Love your recent shots of Olga and Dave's profile picture.

As for the birds and rodents, I'd be downright unnerved if while I was trying to get the rug vacuumed, I also had to contend with birds flapping around the living room and rats underfoot, even if they were singing.

Love the red poppy blooming in the street I hope it reseeds itself there. I have pink ones and am trying to re-establish California poppies in new beds.
I do enjoy feeding the birds but wish they would not eat berries from the poison ivy and bittersweet as they just get spread around the garden.

am I seeing that right, the mosque has a restaurant? and yah, I love those determined flowers that root in cracks.

It looks like you might have even had some good weather for your long walk. I thought about you Saturday evening when I watched an episode of Midsomer Murders and Phyllida Law was in it. She played a very eccentric character that much better fit that bathtub.

Wonderful transformation for the old sleaze theater! And just look at that feisty little poppy, gives meaning to bloom where you are planted.

I so enjoyed the Snow White clip, although the amount of dust in her cottage reminded me that things have been piling up here ... I need to break out the music next time I clean - I just never think to do it but it does make things easier.

Love the poppy as well. I have a similar picture coming up on Friday. Glad you could get out for some photos and exploration.

A mosque with a butcher and a restaurant at the front.

And the poppy. I always cheer for single flowering plants that defy the odds and go it alone in unexpected places.