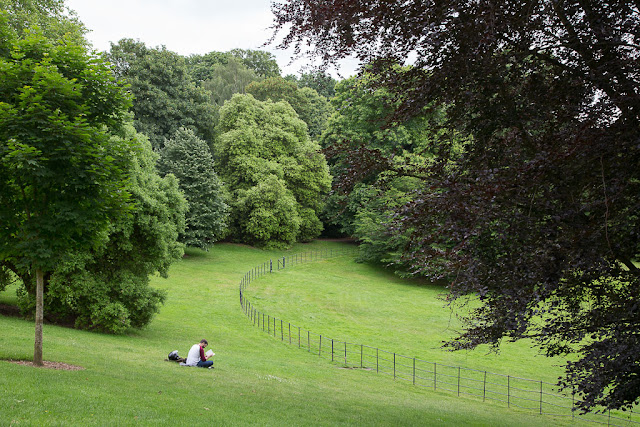 I promise not to go on and on about Brexit. Frankly, we're all still trying to figure out exactly what it means.

But I am depressed about it. It's as if the ground has shifted beneath my feet. I suddenly have the sense that Britain -- or England, at least -- is not the globally-oriented, international nation that I believed it to be.

For the past five years I've enjoyed thinking of myself as an immigrant to Europe. I suppose I still am -- geography doesn't change, after all, and I can still be in Paris in two hours on the Eurostar. But Britain suddenly feels smaller, and, yes, less hospitable. Brexit seems to have revealed something threatening in the national mood, and the mood in many nations with similar movements.

As David Axelrod told The New York Times, "There’s a fundamental issue that all developed economies have to confront, which is that globalization and technological changes have meant millions of people have seen their jobs marginalized and wages decline. And so lots of folks want to turn the clock back and make America, or their country, great again."

(Fortunately, the gist of that article is that a win for Brexit doesn't necessarily mean a win in the USA for Trump.)

I'm all in favor of the worker. But turning back the clock to an idealized period of earlier greatness, when huge segments of society -- and the globe as a whole -- were in fact marginalized or invisible, sends shudders through me. Those earlier periods were great only if you were white and straight and generally male, and stuck to your assigned gender roles.

It's as if I'm swimming, and a dark shadow has suddenly appeared beneath me, looming and unidentifiable. It could prove to be nothing, or it could prove mightily dangerous.

I wonder what Brexit will mean for all the people I interact with every day -- the young Polish woman in my French class, or the Portuguese cafeteria workers at school, or the Czechs at the cash register at Costa. If this vote makes me feel uncomfortable, imagine what they're thinking!

Oh well. On to other news.

The trash-can rebellion yesterday proved something of a non-event. I went next door and spoke to Mrs. Kravitz, and told her that our upstairs neighbors had bought new rubbish bins, which we now needed to put in our alleyway. As a result I would have to move her bins to her own alleyway. She tried to talk me out of it -- "the alley is yours, not theirs," she said, adding that she'd called our landlord to make sure that was true. (!) Regardless, I told her, we share a single house with our upstairs neighbors, and they're more entitled to the alley than she is, when she has her own alley that she simply wants to keep clear for aesthetic reasons.

(In other words, she wants us to store her trash on our property because it looks, well, like trash.)

So that's that. We no longer have to manage Mrs. Kravitz's trash. I probably should have done this long ago, when we first moved in, rather than continue the arrangement she struck with the previous tenant. Which is how we got here in the first place.

(Photo: The lawns surrounding Kenwood, on Tuesday.)
Posted by Steve Reed at 8:13 AM

You refer to a certain narrow-mindedness and a backward looking nostalgia but perhaps you would be better to direct your gaze upon Brussels and Strasbourg. Much of Britain's discomfort about Europe was caused by those Eurocrats and their developing "project". They appear distant and unaccountable despite the thin threads of democracy. Don't blame Britain, blame them. They weren't listening as they pressed on with their juggernaut.

I greatly appreciate your thoughts here as I try to make sense of just what Brexit means. And I gather that now there are Frexit (France) and Nexit (Netherlands) movements afoot. It was also reported yesterday that many who voted to leave are having buyers remorse the morning after.

I have to say that I was shocked when I woke up to the news yesterday morning. I listened to many commentaries on the subject yesterday and none seemed to feel that there would be a truly positive outcome. Like "37" above, I heard a lot about other countries wanting out and about Scotland wanting to separate from the UK in order to go back with the EU. One discussion talked about the world-wide fear of immigrants that appears to be driving part of the decision. It's strange how the people most exposed to diversity are the least afraid of it while those who encounter only a few feel somehow overrun.

It's impossible to discuss the Brexit issue in a comment (it would probably take a book!) and I need to read from more sources to more fully understand the issues as I don't think the media necessarily tells the whole story. That being said, we have come through a similar situation here on a much smaller level recently, and it has made me think a lot about locus of control and being a doormat ... (boiling it down to simplest terms). Just as you have drawn a line between your neighbour's right to your alley and your own right to your alley, I wonder how much of the vote to Leave may have resulted from Britain's collective feeling that the neighbours are taking advantage of them. As we have all acknowledged, it's an extremely complex situation, but it does seem like the EU, although intuitively sounding like a good thing, did not seem to be working for its members. Other countries did not take long to say "us, too". I don't know what the answer is. I don't think anyone knows the answer just yet. And love and acceptance and economic realities and safety from terrorism all must have a place in the answer.

Brexit? So many Questions. Not many answers. I think the leave people were looking through a funny color of glasses.

I'm sorry, Steve. It's all bewildering, to say the least. Paul Krugman had some wise words today that somewhat lessened the hysteria, but I think it's a sombre mood most of us are in. It must be really weird to live there, and I actually think something so entirely momentous needs to have well more of a 50-50 chance of passing, no?

YP: Well, I blame both. The EU isn't a perfect institution, and yes, our representatives there should have been listening and working more effectively to address the concerns of the English. (Interesting that the Scots were fine with it all.) I DO think Brexit is a small-minded response, however, and one that imperils the future of Europe and the UK.

37P: Yeah, some people were quoted the next day saying things like, "Well, I would have voted the other way if I thought we would actually LEAVE!" Which makes me wonder if they understand voting.

Sharon: Isn't that always the case? It's like with gay people -- if you know a gay person or have one in your family, you're much less likely to be homophobic. It's when different groups of people are turned into abstract "others" that we run into problems.

Jenny-O: I wondered if anyone was going to compare our alleyway situation to Brexit! I considered doing it myself when I wrote this post but I couldn't figure out how to make it work, exactly. I would argue that while Mrs. Kravitz brings us NOTHING, the EU actually does provide something for England -- a more unified and less threatening continent and a cooperative framework to deal with large-scale problems. I recognize that not everyone sees the EU that way, though, and in fact I'm sure many people would say it, like Mrs. Kravitz, brings England NOTHING.

Red: Lots of questions. I'm tired of thinking about it.

Elizabeth: I will read Krugman. It's heartening to live in London, actually, because so many people here are so angry. I don't know anyone who's dancing in the streets, although I'm sure some people must have been. All I see around me are people shaking their heads and wondering how this happened.

One more general comment: I often hear people complaining about the "undemocratic" nature of the EU. I'm not sure what this means, since voters in the UK directly elect 73 representatives to the European Parliament, which is in charge of the hiring and firing of the Commission and the so-called Eurocrats. Granted, 22 of our representatives are UKIP members, and my guess is they're not terribly effective, since their party exists mainly to oppose the EU entirely.