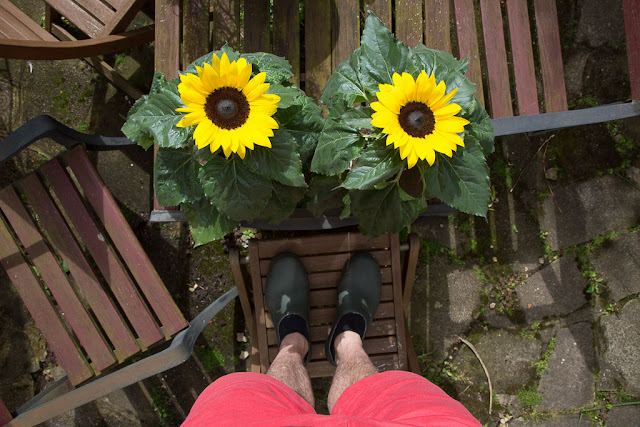 -- Dave and I bought a pair of big, bright sunflowers for the garden. We haven't planted them yet, but they're already soaking up whatever British sun is available on our patio table.

-- Our bank has recently informed us that they're going to begin charging us £20 a month in order to store our money. This has to do with the type of account we have, which is not really the account we need. (We set it up by telephone during a period of relative confusion while we were preparing to move from the states.) So now we're trying to open a more appropriate account. Nothing is simple, however. First we had a terrible time getting an appointment with a bank representative, and now we're having to present documentation that proves we live where we say we do. Apparently our lease is not sufficient, nor is a statement for Dave's student loan or my life insurance. They're demanding utility or council tax bills. But we pay all that online; we don't get bills by mail, and computer printouts of online statements are not allowed. AAAAAARGH!!! 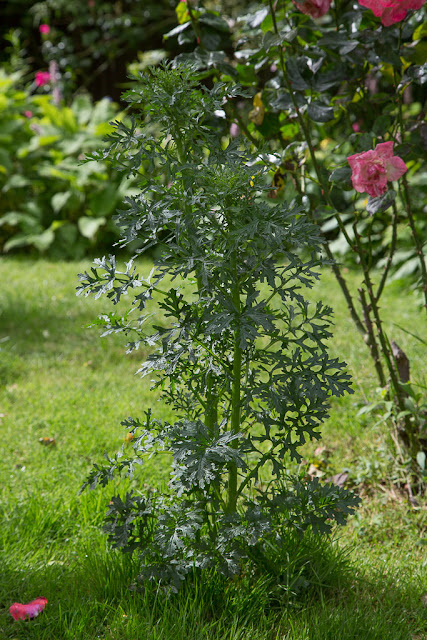 -- We recently learned the identity of our back garden mystery plant. Dave sent a photo of it to an online gardening forum, where gardeners unceremoniously identified it as ragwort and advised us to get rid of it. "It's a weed," one said. But I looked it up, and while it is a weed, it is also the only food source for the cinnabar moth caterpillar, which I remembered seeing a few years ago on ragwort near the Grand Union Canal. So we're keeping it, in the hopes that a starving cinnabar moth will find it.

-- Along those lines, I weeded our front garden, and removed numerous wild thistles. I hated to kill them all outright, so I transplanted one to the "wilderness corner" of our back garden, where we have borage, campion, rosebay willow and a patch of unmown grass. It seems to have survived the transplant and the bees are looking forward to some thistle! 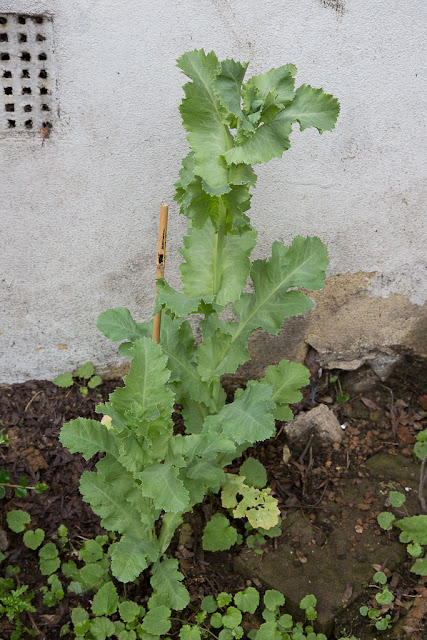 -- Also in our front garden, I found what I believe are opium poppies. I don't remember ever seeing them before. I wonder if they were previously concealed by the heavy brush (which you may remember we had cleared in January)? Perhaps they never bloomed because they were so heavily shaded. Anyway, this year, they're setting buds and we're looking forward to flowers.

-- On Thursday night Dave and I went to see Michael Moore's newest movie, "Where to Invade Next." In it, Moore travels the world to find countries that have more humane prisons, offer benefits like free higher education and elect more women, and then "steals" those ideas (among others) for the United States. We generally agree with Moore's world view, and we liked the movie a lot. 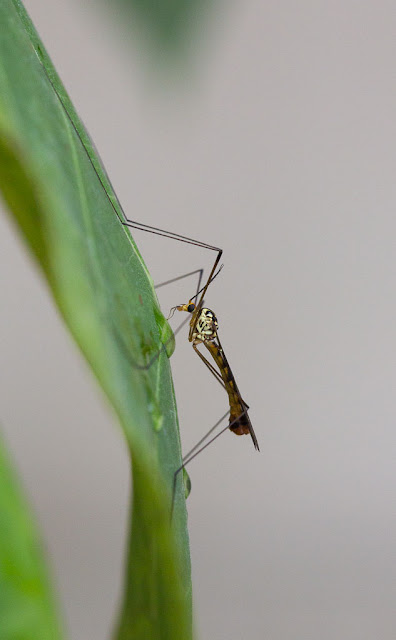 -- I moved our avocado tree outdoors on Thursday and hosed it down, and then brought it back inside. I found this cranefly lying on the floor in the corner nearby, and when I tried to catch it it flew immediately to the avocado. I don't know whether flies drink, but that's what it appeared to be doing from left-over water droplets on the avocado's leaves. The poor thing was probably dehydrated, being trapped in our house! It sat on that leaf for about an hour before disappearing, flying out the nearby open door. 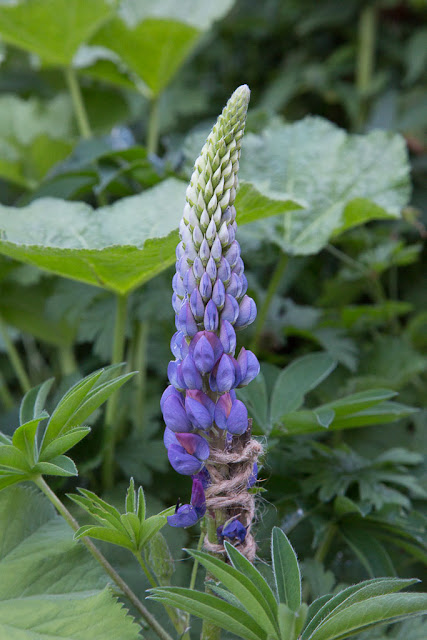 -- And lastly, Dave planted some lupines in our garden, where they're unfortunately very popular with the snails and slugs. Getting them to bloom has been a challenge, but we finally coaxed one to produce a flower. Then yesterday morning I discovered that a snail had gnawed three quarters of the way through its stem during the night, leaving the flower slumped over with a broken neck. I rigged up a splint with a stick and some twine, and now at least it's upright again and seems to be surviving. Floral first aid!
Posted by Steve Reed at 6:50 AM

Good luck with the bank account switch. Sounds like Catch 22 but I guess they need to be careful with this sort of thing as you could be fraudsters. Rather than pay my bank £20 for the privilege of having an account with them, they pay me money! Unlike you two, I don't look like a fraudster. This helps.

Is there a credit Union you could join? They usually don't do that sort of thing and best of luck with your conundrum. Love the floral first aid, hope it works!

Kafka would be proud: It sounds as though that bank has made an art form out of its bureaucratic procedures. Untangling yourself from their web will be quite an accomplishment.

What? No Doris shorts?
You're such a kind soul, only you would transplant a thistle!
Tape works for plant repair too.

You are a very compassionate gardener. My poppies are a beautiful pale pink with a lilac center. Are they opium poppies? I look forward to seeing yours.
I hope you get your banking issues resolved soon. Can you not print out an online utility bill and does payment not appear on a credit card or debit card statement?

I do that too! splint up broken but not broken off or bent over plant stems. my night blooming cereus got blown over by high wind and broke one of the long stems that had a well developed flower bud on it. it didn't open, fell off, but I noticed that the leaf/stem is producing another bud. I looked up ragwort and it blooms profusely with clusters of yellow flowers. very showy. I wouldn't consider it a weed myself, but a wildflower. and re the poppies, I doubt they are opium poppies unless you know for sure that they are. there are many kinds and colors of poppies. how odd that the bank is requiring so much documentation about your address especially since you already have an account with them.

I remember when technology was going to be the savior of mankind and trees.
Hahahahahahaha!
It has become the most insane-making tool we ever invented. Of course it does have its purposes.
No wonder that backyard gardens and chickens have become so popular. We desperately need a balm to soothe our souls after dealing with such bullshit for so many hours of the day. Our caveman brains can only take so much before we just have to get into the dirt and hang out with the insects and green things.
Opium poppies? Save me some seeds, please.

I do love hearing the tales from your truly wild garden. There is quite a lot of activity happening there.

I love to hear of tender-hearted people, and you are one. Although dealing with the bank might make some of that vanish. Are they insane? You can't be the only one in this impossible situation. There is no such thing as common sense anymore where banks are involved!

Great, the poppies may come in handy! The weather is like it is here, today the furnace went on, it is dark and raining non stop. Considering that it is 122 degrees in Palm Springs , I will take this.
Thistles are awesome !

Banks are getting to be a royal pain. They've got more charges than you can think of . soon they'll be charging you to walk by on the sidewalk. After all that they have enormous profits.

Banks - they are a total pain. Why don't you invite the bank rep. around to dinner and then ask That Woman from next door to swear on oath that you reside where you claim to reside. That ought to work!!

A wilderness corner. What a great idea.