Dinner with the Leavers 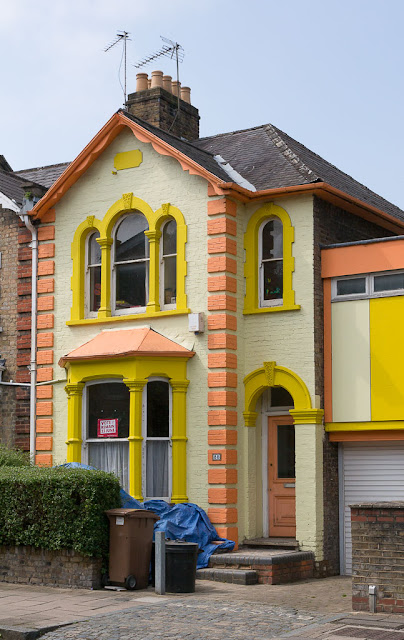 I promise not to write another long tirade about Brexit, because I'm sure it's not nearly as interesting to people in other parts of the world as it is to us here. But it's really been heating up lately, with both the "Remain" and "Leave" camps leaving fliers in our letterbox and trying to spread their message. 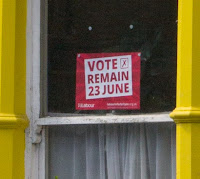 I see a lot of Brexit signs when I'm walking around London, like this one in the window of this colorful house in Stoke Newington. Interestingly, I have seen only "Remain" signs. I have yet to see a "Leave" sign in anyone's window. (I know they're out there, though, because one of my coworkers said someone on her street has one.)

I've heard that Londoners in general tend to favor Remaining more than people elsewhere in Britain. Perhaps that phenomenon is what I'm witnessing.

Last night, Dave and I had dinner with our friends Chris and Linda, who are solidly in the "Leave" camp. I was really looking forward to our meal, because I wanted to talk to them about their reasons for voting "Leave" -- especially Chris, a former political journalist who is socially quite liberal. (Some of the momentum behind the "Leave" movement has come from right-wing and far-right political leaders.)

At first, Chris argued that Europe is undemocratic, that laws are made by faceless bureaucrats in Brussels and Strasbourg and inflicted on the British. But I pointed out that there is an elected parliament, and we went back and forth about its effectiveness and responsiveness. I essentially argued that if the structure doesn't work, the appropriate response is reform, not bailing out.

I also pointed out that the anti-immigrant scaremongering of the "Leave" movement, particularly with regard to the pie-in-the-sky likelihood of Turkey joining the EU, really turned me off. (Being an immigrant myself!)

What became obvious as the evening wore on is that Chris, who is in his 70s, is looking backward -- to the Britain of decades ago, the wartime and postwar Britain that he holds in such high regard. His parents, he said, fought and sacrificed for British sovereignty and the defeat of the Nazis, and would be appalled to know that Germans are deciding laws that affect the British. When he says the EU is undemocratic, what he's really saying is that Britain gets outvoted.

He repeated his mantra: "We are an island nation."

(It seems to me that Britain's status as an island is often emphasized here. The other day I picked up Antonia Fraser's autobiography and saw that she learned to read using a well-known children's history book called "Our Island Story." It made me think immediately of Chris.)

Anyway, it was a fascinating conversation, and I like Chris and Linda because we can all disagree and, at the end, walk away smiling. Which is what we did. 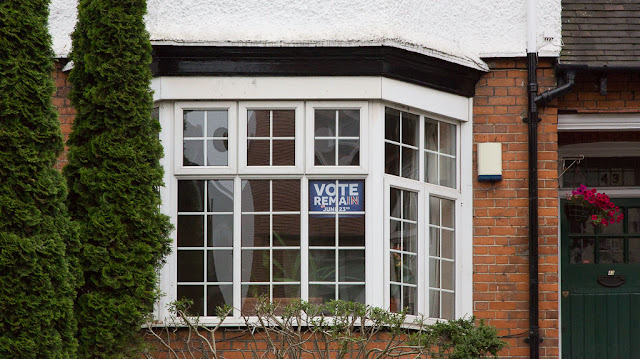 The other night, some "Remain" campaigners came to our front door. We explained that although we support staying in the EU, we can't vote in the referendum. They gave us a "Remain" sign for our window. So we may not be voting at the ballot box, but we're still expressing our opinion!
Posted by Steve Reed at 7:43 AM

The main undemocratic feature of EU government is the unelected European Commissioners who have enormous power within the European Union - a power that supersedes the cumbersome machinations of the European parliament that for some obscure reason trundles at great expense between Strasbourg and Brussels. I'm voting for you and Dave to Leave - sorry but it serves you right for allowing your lawn to grow wild like a prairie. If you trim it nicely and prove it with a picture I might go over to the Remain camp.

Chris was pointing out that Britain has sent Nigel Farage to the European Parliament for years, and he has been unable to affect change. But as I told Chris, Nigel Farage is probably not the best change agent Britain could offer. It's better to send someone who can work within the system rather than simply be an obstructionist.

I promise I will post a photo proving to you that we practice EU-standard lawn maintenance around here. :)

Great Britain is such a conundrum to me.

It's refreshing to hear that you can have such a conversation with friends without any animosity or hard feelings. That seems to be so hard around here lately. A few weeks ago I questioned a comment an acquaintance made about an Obama policy and she immediately started shouting. Instead of learning something, everyone at the table was made to feel uncomfortable.

Hearing and agreeing with both sides, Perhaps forming the EU was a mistake in the first place, perhaps not...I like the old hassle of changing currency and being checked at every border , it felt safer, more distinct culturally. Now I appreciate the ease of travel from country to country and the homogenized populations. But I get it, it is a dilemma. If I were an older British person I would want my old Britain back - change is difficult and being your own boss is preferable. I do not trust the EU- kudos to Norway!!

It seems that both sides have decided what to do and are very rigid in their view. I don't think many votes are going to be changed.

I, for one, find it quite interesting, actually! I'm glad you two and your friends can discuss it intelligently and stay friends. That house is striking with its yellow trim.