Notes from the Universe 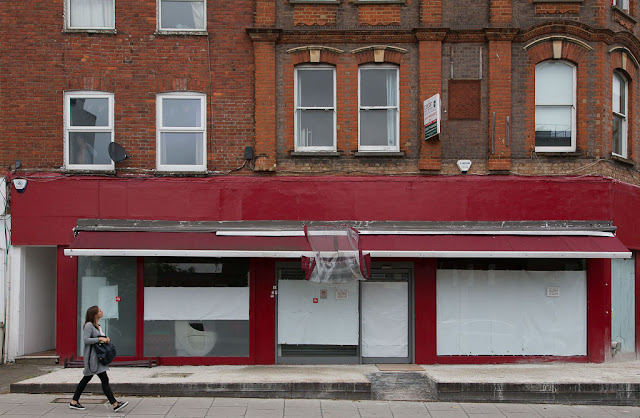 This is a very strange cafe down the street. It used to have a name -- Monte Carlo, I think, or something like that. And then it became a nameless, signless shisha lounge, and despite looking completely abandoned, people would still magically appear some afternoons at tables in front and smoke hookahs. This went on for a surprisingly long time, and then even that activity stopped. Now there's a broken window at the side and it looks like it's for rent.

My cold has dissipated, but I've been left with a painful case of sinusitis, just above my left eye. Not to be too graphic, it feels like someone jammed a hot coal into my eye socket over the eyelid. I was sitting in French class yesterday morning, with no aspirin, and my eye was watering, and although I was supposed to be focusing on the pluperfect tense (or the plus-que-parfait, as it's known en Francaise), all I could think was, "Sacre bleu! Mon oeil!" 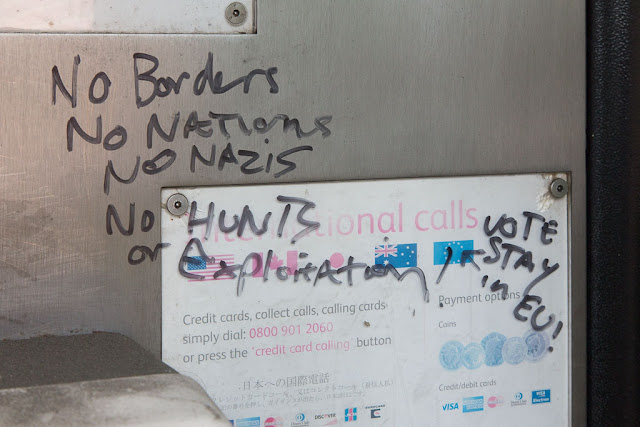 I came upon this not-entirely-coherent rant in a phone booth the other day. I appreciate the sentiment, but I don't think "no borders" is going to be an effective argument to convince the Leavers to stay in the EU. In fact I'd say that's pretty much exactly what they fear.

The Brexit vote is Thursday. I'll be glad when it's over, although polls seem to suggest there's a very real chance the Remain side will lose. Did you hear about the Yorkshire lawmaker who was killed by a constituent, apparently over this very issue? Granted, the assailant appears to be a neo-Nazi nut, but tempers are running hot -- even among more stable people. 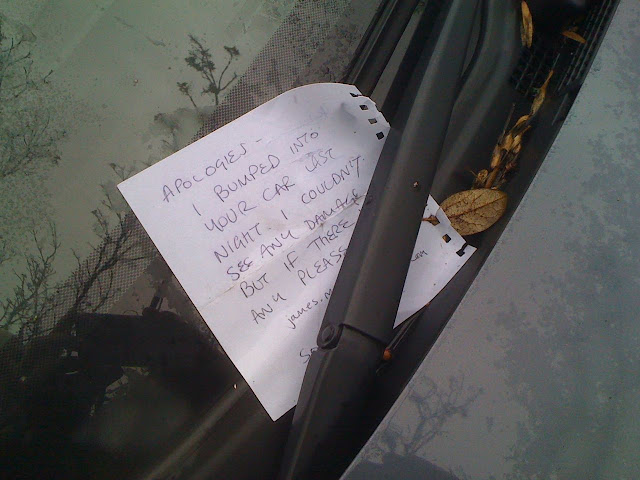 A few months ago, Olga and I came across his note from a hyper-conscientious driver. I've been meaning to post it but kept forgetting. You gotta applaud someone who goes to such great lengths to make things right. (From what I could tell, the car was fine.)

Have I mentioned that I bought my ticket to go back to Florida next month? I'll be there for two weeks in July, visiting family, beginning on the 5th. That is, if my sinuses don't implode.
Posted by Steve Reed at 7:09 AM

If Britain votes "Leave" you'll have trouble getting back into the country in August. If you need a native-born sponsor to vouch for you, I'll be happy to do that... for a substantial fee of course.

That note charmed my heart.
I think maybe you need to go see a doctor.

The story about the shooting of the MP has been covered quite a bit over here. It's a very sad situation that sounds all too familiar to us over here. I'm interested to see what happens with the stay or leave vote.

I read that he got some information from an american on how to make your own gun. nice. not content with just shooting ourselves up, now we want to import it. maybe you need one of those neti pots to clean out your sinuses. never used one myself as the whole description grosses me out but people say it is very effective. I tend to just rely on sterile saline solution in a squeeze spray bottle.

Very sad news of the MP. As I understand it she tried to intervene between the shooter and another man, but that was a preliminary report, so may be wrong.

I'm intrigued to see the result of the vote. And that note would be unheard of here, I think. My current car was struck, dinged, scraped and scratched four times in parking lots before it was six months old. Not one person left a note for the very visible damage!

Hope you feel better soon. Get thee to a doctor if your sinuses don't turn around in short order. My husband has the plague at the moment and I'm just waiting for my turn to start coughing and sniffling.

The one part of your universe is a pretty sad derelict. Hopefully someone rescues it.

I'm trying to decide why I care, but for some reason a "leave" win makes me feel depressed...

I wonder if a hookah would help your sinuses?

With so much pain in your sinuses you should get medical care. You may really need an antibiotic for this. Feel better soon.

James is a peach x