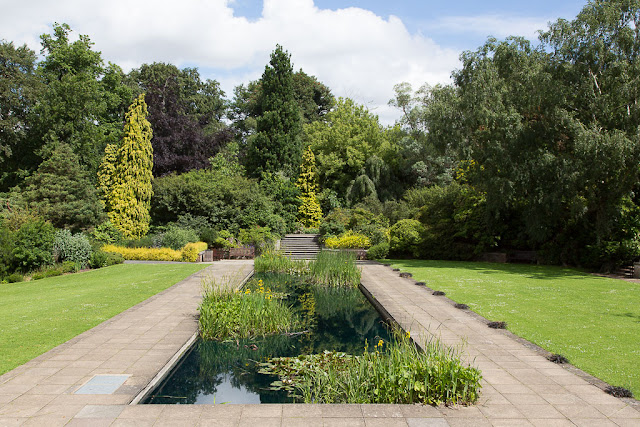 On the West Heath, where I so often walk Olga, is a large structure known as the Hampstead Pergola. "A magnificent Edwardian extravagance," as the City of London calls it, the pergola was built by Lord Leverhulme in 1904, after he acquired an adjacent mansion, and finished by 1925.

I've always been curious about the Pergola, but until this week I'd never been, because whenever I'm on the West Heath I have Olga with me. And Pergola Management are quite firm about their feelings for those of the canine persuasion: 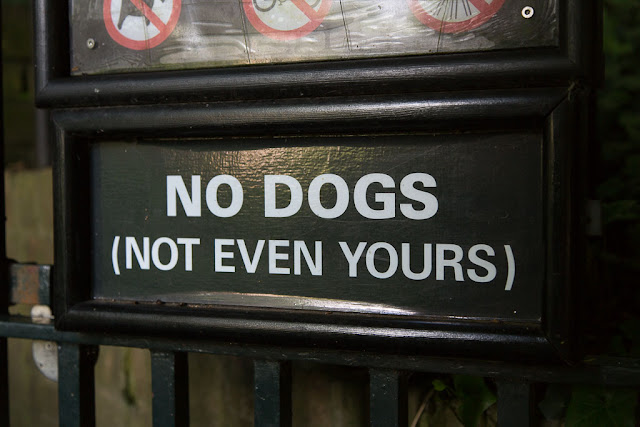 So on Wednesday, when Olga went off with her dog-walker (who we've kept on for the summer, even though Dave and I aren't working, for complicated reasons that I'll explain sometime) I walked over to the Pergola. 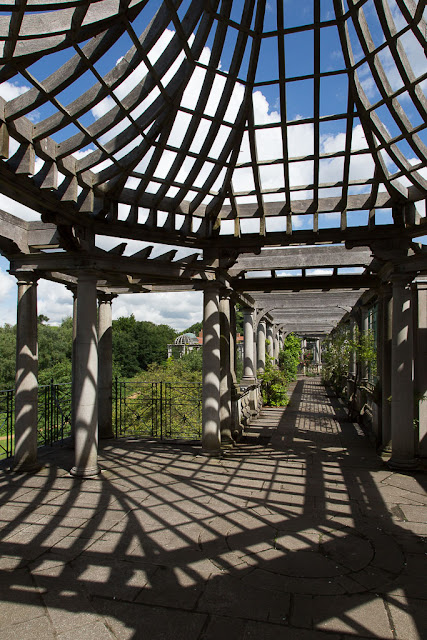 The main structure is an elevated, colonnaded walkway, with beams overhead and roses and climbing vines planted along its length. It winds along the back of Lord Leverhulme's mansion (now subdivided into expensive apartments) and out into a formal garden with sloping lawns, a shallow pool (top photo) and beds of iris and foxglove. 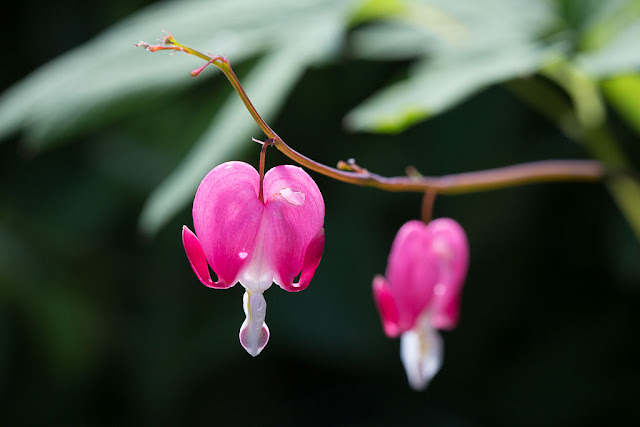 I photographed some of the plants, like these bleeding hearts (which we have tried to grow without success in our own garden). 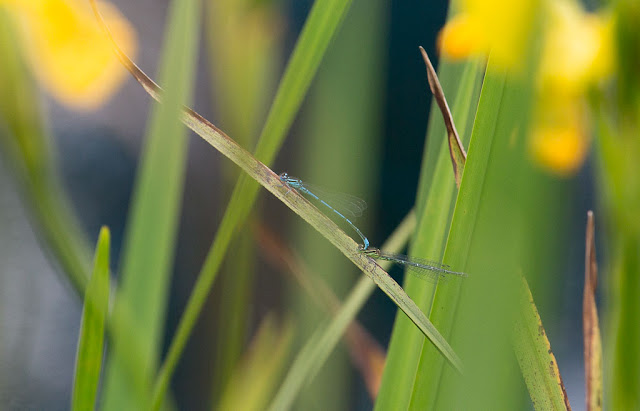 But I spent most of my time at the pond, where I went a little overboard trying to get just the right shot of one of the many pairs of damselflies. I shot 83 pictures of damselflies!

I know -- crazy. I deleted all but about ten of them. 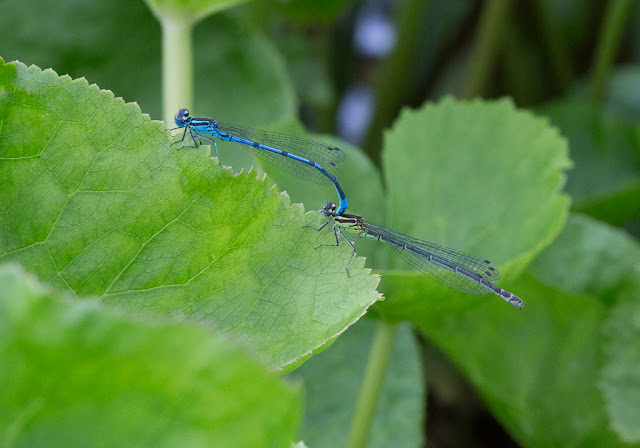 Eventually I narrowed those down to a couple that made me happy.

And then the skies opened and it began to pour rain, so I caught the bus back toward home, the Hampstead Pergola no longer so mysterious in my mind!
Posted by Steve Reed at 6:25 AM

Taking lots of pictures of insects having sex is rather weird in my opinion. You should consider counselling.

I was just thinking "There, see? England has lovely days of sunshine." until I reached the end of your post and the rain!
Not a fan of any bug whatsoever, but you've made damsonflies look quite lovely.

I tried to take a picture or two of a dragonfly on the clothesline the other day and it just didn't work. Of course...I was using my phone.
I guess equipment counts, right?

I could roll right down that pergola walkway...right? Love the humor of Mr. Pudding!

All that sunshine in the first and third shots and then it started to pour. You gotta love London weather! When I take photos of dragonflies or other insects I do just about the same thing. It's had to tell if the camera is really focused on the subject so I take many shots just to make sure I get a good one. Great job on these delicate little creatures.

well, I do the same thing. I have a picture of two anoles 'reproducing' that I have yet to publish on my blog. I wish the dragonflies would show up here to take care of some of these mosquitos. The pergola is pretty cool. I wonder what the apartments look like.

Lovely photos of the damselflies. That sign is the best.

Ssince starting to photograph things for my blog, I understand the anticipation of going somewhere with the camera, especially somewhere I haven't been before or have been wanting to get to! Beautiful shots, all of them. The bleeding heart especially appeals to me. Love the no dogs sign :)

so appreciate your curiosity and photographic skills - I can understand why dogs are not welcome. Don't like it but do understand. Stay curious, get into trouble- life is short!

Lots of good stuff in this post:history, color, gardens.

Lovely place! Love the damselfly photos - very risque :) I imagine Olga appreciates having her routine stay (pretty much) the same for the summer.

The pergola - constructed just for the Shadows and Light blog!

I love this posting, well NOT the sign.... but the pergola image is just one to remember!