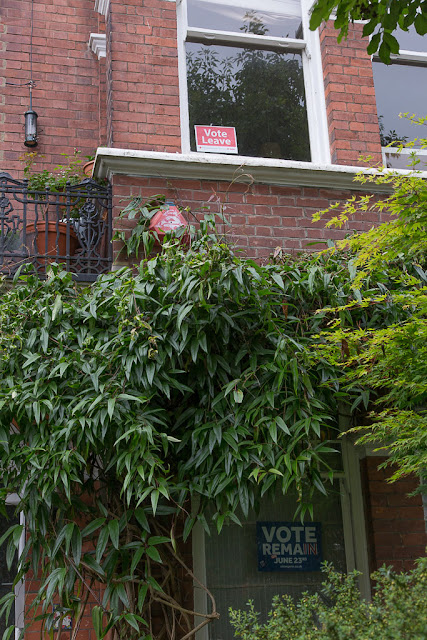 Finally, Brexit day is here. Whichever way today's referendum turns out, I'll be glad to have it over with. (You all know how I feel.) It's pouring rain this morning and I hope that doesn't keep too many voters from the polls.

The New York Times did an excellent article the other day on divisions between family members over staying in or leaving the EU. I thought it highlighted the generational differences quite well. That article came to mind when I saw these two signs in the windows of a house on our street -- though they're probably neighbors in a house that's been turned into flats, rather than family members. I wonder if they have lively debates, or if they just don't talk about it?

Incidentally, to date, this is the only "leave" window sign I've seen, and it appeared just a few days ago. "Remain" signs, by contrast, have been all over our neighborhood for weeks. I'm not sure how representative we are of the national electorate, though. 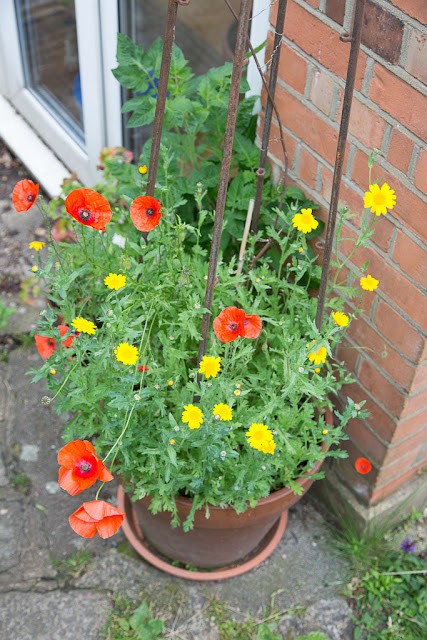 In other news, our wildflowers are positively overflowing the pot where they've grown from last year's seed. For some reason, none of the blue cornflowers seem to have re-seeded. We got plenty of poppies and those yellow guys, though. 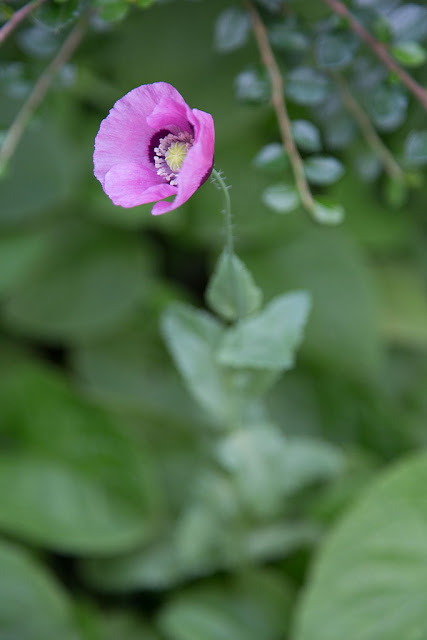 Also, one of the mysterious poppies that appeared in our front garden bloomed yesterday. Nice! We have seven or eight of them, and I'm guessing they're all going to be this pink-purple color. I'm still vague on whether they're actual opium poppies, but our Russian upstairs neighbor took one look and said they'd be illegal in her country -- so that may be an indication. (Ornamental opium poppies are apparently not illegal in the UK, and several of our neighbors have the same kind.)

Yesterday was Dave's birthday, so last night we went to dinner at Alain Ducasse at the Dorchester, which we've wanted to try for a while. We both had the tasting menu with wine pairings, as usual, and it was fabulous!
Posted by Steve Reed at 7:19 AM