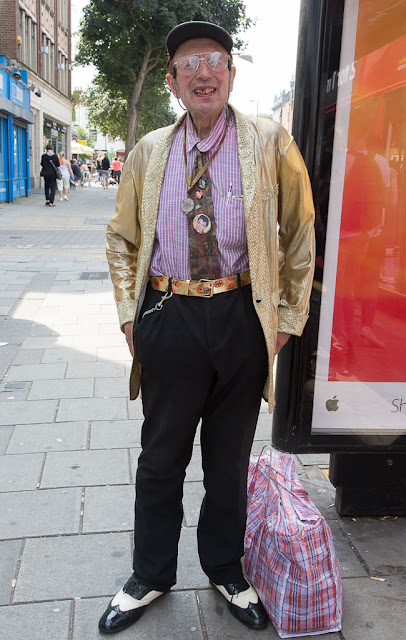 This is Dave Elvis. I crossed paths with Dave in Islington on Tuesday -- I saw him walking ahead of me, in his shiny gold jacket, and I thought, "I need a picture of that guy." He stopped at the bus shelter, and I asked him whether I could photograph him.

Sometimes I'm shy about asking someone for a photo, but when they're dressed like Dave Elvis, I figure they don't mind being noticed. You probably can't tell, but in addition to the gold, sequined jacket, Dave is wearing an Elvis Presley necktie and buttons.

Turns out, Dave performs Elvis songs. He broke into a rendition of "I Can't Help Falling in Love with You," and he sounded pretty good! He had the Elvis voice-warble down pat. We had a short chat about the pub where he sings karaoke, and Elvis movies -- Dave also serenaded me with a version of "Viva Las Vegas" loud enough to turn heads. He isn't at all shy about singing in public.

I promised to send him the photo via Facebook (he has a Facebook page). Which I did when I got home.

Today I'm headed back to work! I got up at 5 a.m. to give myself plenty of time to get ready, because honestly, over the two months I've been on summer break, I've forgotten my morning timetable. Olga gamely got up with me, though she promptly fell asleep again on the couch.
Posted by Steve Reed at 5:50 AM