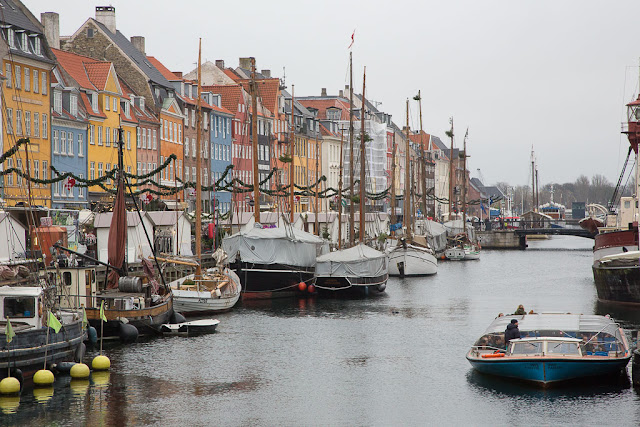 Dave and I set out walking yesterday and wound up taking a spur-of-the-moment harbor cruise from Nyhavn (above). We went on one of the flat little boats like the one at right, which are built to glide beneath Copenhagen's numerous incredibly low bridges. 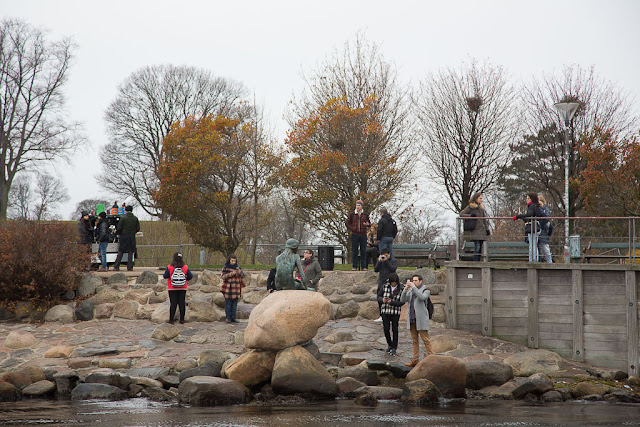 It was an interesting experience -- and cold, at least on the outdoor deck! For one thing, it gave us a fast-track route to the famous Little Mermaid sculpture on the harbor. We only saw her from the back,  surrounded by her usual retinue of tourists, but that's enough for me. 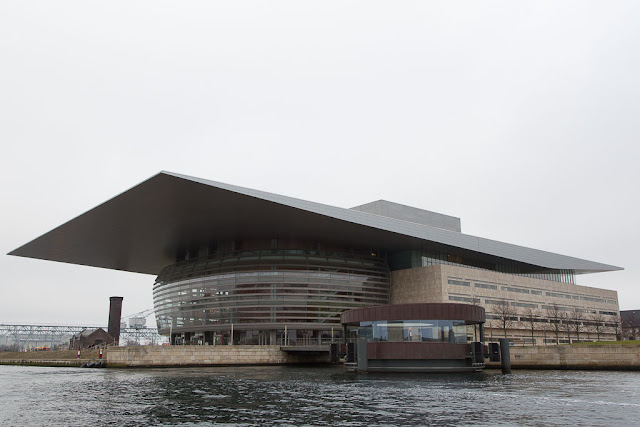 And we saw some interesting architecture, from Copenhagen's ultra-modern opera house... 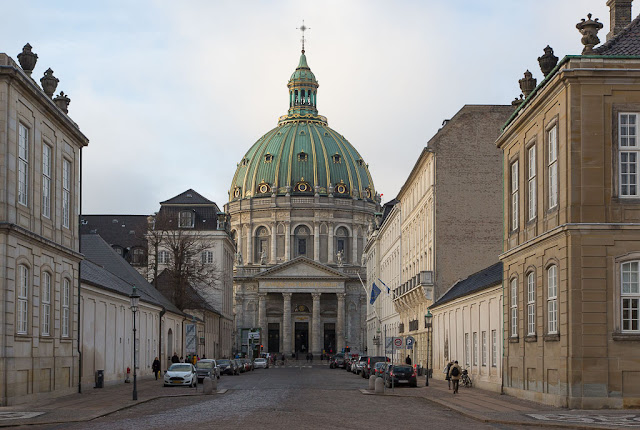 ...to the more traditional Marmorkirken, or Marble Church, which was started in 1749 and then took about 150 years to finish. (I shot this after we got off the boat and walked to Amalienborg Palace, home of the Danish royal family.) 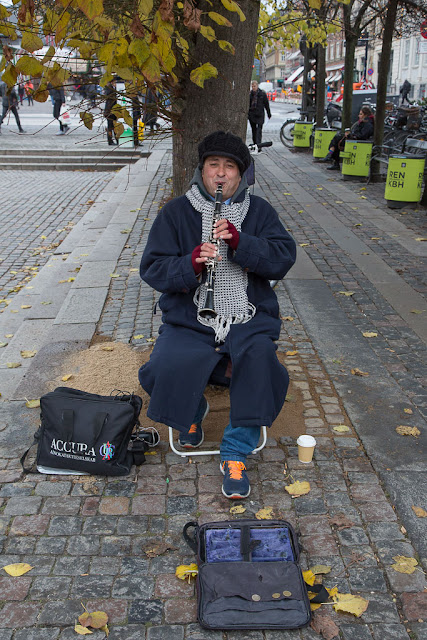 This guy was entertaining the passers-by on the canal in Nyhavn. It's not often you see a busking clarinetist, is it?

Dave and I ate an insane amount yesterday. After the boat tour we had lunch, the traditional smørrebrød, a kind of open-faced sandwich -- or, in our case, four open-faced sandwiches. (We didn't quite understand the menu.) They were topped with pickled herring, paté, sliced beef and shrimp with dill sauce -- with more Tuborg Christmas beer and aquavit, it made quite a lunch! 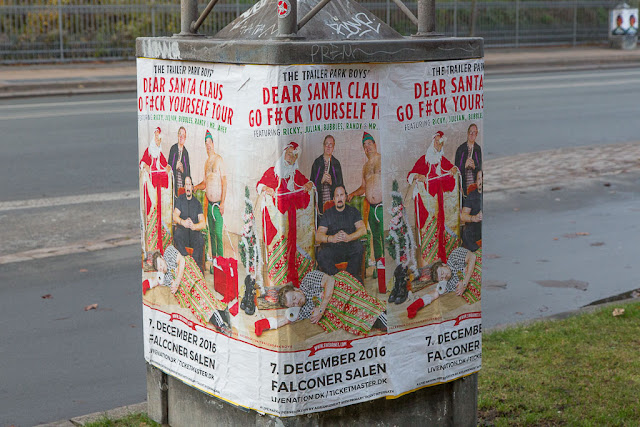 After lunch we walked to Rosenborg palace (lots of palaces around here) and then to the Rundetaarn, a tall, historic round tower with a sloping ramp. Supposedly there are great views from the top but we didn't ascend it, having walked quite a distance by that time. Dave, in particular, was ready for the hotel, so he headed back while I went on a brief exploration of the local park and some little side streets. I found a gay-themed store called Homoware, where I chatted with the proprietor and then felt like I should buy something -- so I picked up a pair of striped gym socks. I'm sure I'm supposed to wear them clubbing, but I'll probably wear them to walk the dog.

We ended the day with dinner at a nice seafood restaurant not far from our hotel. This time we did some advance research on the menu by translating it with Google Translate, but the results were questionable. One shrimp dish was translated as "hand-peeled travel in congestion."

Fortunately, the restaurant had a menu in English. I ate light!
Posted by Steve Reed at 7:29 AM

Thanks for the tour Steve. We were in Copenhagen for a few days some years ago, so it brings back happy memories. We did all the touristy things, the boat trip being the best part. I'd like to go back and see more of the countryside - the last time I went on holiday to Denmark, was with my parents, over fifty years ago !!

I visited Copenhagen in 2000 with my daughter. We were on a camping trip and caught the train into Copenhagen from Roskilde where there is a museum that contains several Viking ships. We also went to Helsingor (Shakespeare's Elsinore) before crossing over into Sweden. By the way, we saw The Little Mermaid from the front!

There. The Little Mermaid. Thank you.

I think I'll pass on the "hand-peeled travel in congestion". as it happens, if my sister's research is correct, I'm descended from a Danish king from the 900s.

I'm so pleased you're having a good time. Re the Little Mermaid, I thought you caught her from her best aspect, but that's just my personal view! PS 'hand peeled travel in congestion, surely that should have translated as. 'Sardines?'

That translation sound just like what it feels like to fly with a head cold! I don't know how that guy can play the clarinet out in the cold like that. I wouldn't be able to move my fingers. You got some great shots around the city.

You are making good use of your weekend in Copenhagen. sometimes spur of the moment things turn out very well.

Had to laugh at that terrible translation.
My hubby has been in touch with relatives in Sweden over recent years and we use the Translator to communicate, but it's quite inept much of the time and leaves you shaking your head.
-Kate

I remember some of the places you've ;visited...would love to see the new socks!

Copenhagen looks like a great city for the tourist and I like the idea of the boat cruise. When we were in Paris we were told by a local that we must take the night cruise but we were too worn out to do it. I regret it still.

Wow, you packed a lot into a day, and will we be seeing those socks? I should hope so :) Those buildings are beautiful, all of them.