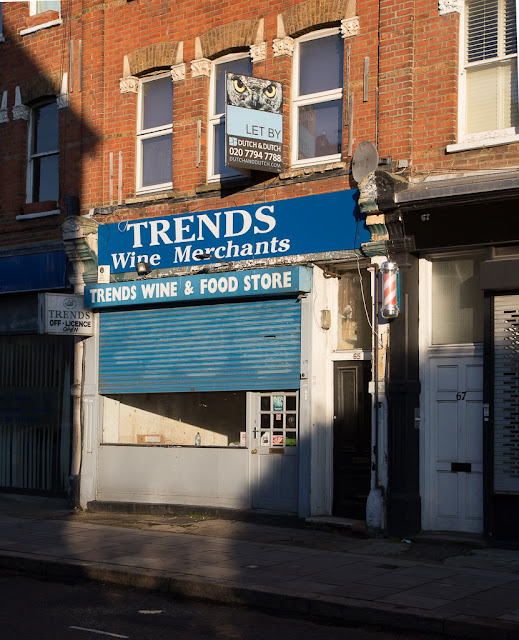 The Trends wine shop on Mill Lane, not far from our flat, closed several weeks ago. I always liked this place because of its abundance of signage, but I must admit I never bought wine there. (We patronized another, closer wine shop, and unfortunately it has now closed, too. We hear it will reopen under a new owner.)

As some of you know, I've been working on transcribing my old paper journals into blog form, in order to create a digital backup. The other day I transcribed an entry from my days living in Morocco, in the early '90s, in which I mentioned coming across a puddle full of strange creatures -- I described them as resembling small, pink horseshoe crabs. Apparently, they really repulsed me.

I never learned what these things were, but fortunately, I also drew a picture of them. Using that as a guide, I got online and did some research and found that they're called tadpole shrimp. They apparently live in seasonal bodies of water and their eggs encyst and live in the environment for up to 27 years before hatching when the conditions become right. I mean, that is freaking amazing, is it not? Nature is incredible. Anyway, I'm glad I solved this 22-year-old mystery! 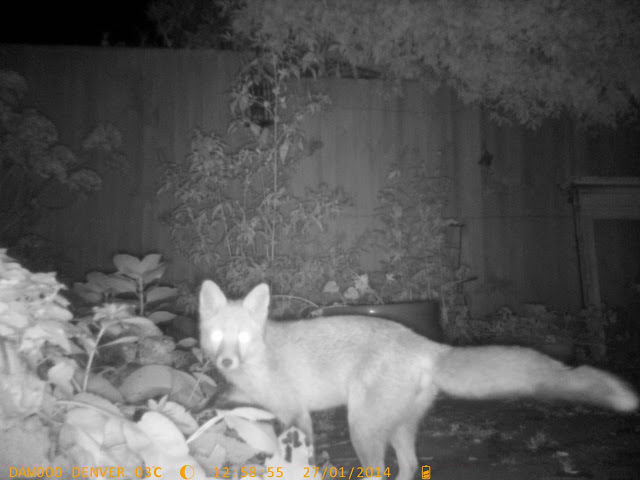 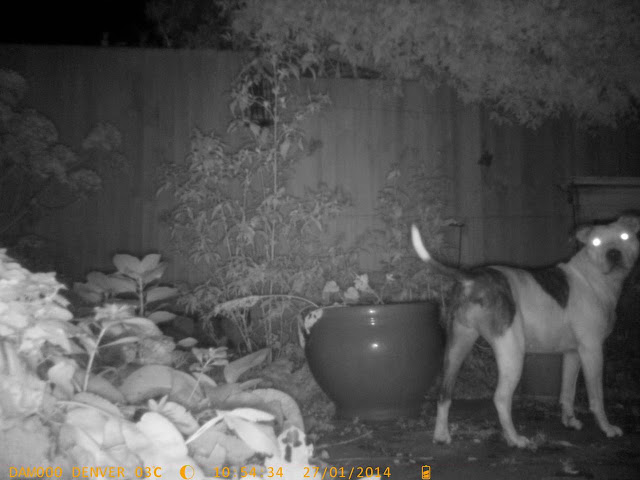 Olga and these foxes do a sort of continual pas-de-deux, taunting each other with their mere presence.

And speaking of French, I thought yesterday about whether I want to continue my classes and why they've become so hard for me. The classes themselves aren't that difficult, but I'm struggling with motivation. I think I've been somewhat frustrated by my slow progress, but I have no one but myself to blame -- after all I can barely bring myself to do my homework and I'm often distracted by other things. So I've decided to double down and work harder. I spent about an hour last night studying, including making some flash cards so I can finally learn my verb forms and stop sputtering tentative guesses, and I wrote a note to my teacher (in French! Using tenses!) in which I apologized for my absence and told him I would be back after Thanksgiving. (He doesn't care; it was more just an exercise for me.) And I'm going to sign up again in the spring, even if it kills me, and I apologize in advance for all the whining I'm going to do.

Oh, I love your perseverance. I've always regretted majoring in French -- I hated it so much!

And those night cam pictures are eerie.

Your night time visitors are amazing! Makes me want to get a camera for our garden but I think we only have cats here.

As for French, I am a strong believer in immersion as I am the perfect example. I was shit at languages in school, failed French three times, sighed with relief when I could drop out of English and struggled my way through Latin for my language requirement to get into university. And then I met my man and shortly thereafter, his large Irish family who to this day play parlour games and hold cryptic crossword competitions. After my first Sunday lunch in my future in-law's house I had to play charades and my clue was "Deliverance" - to this day my brain refuses to know the German translation.

You know there are wonderful language courses with complementary wine tasting and/or French cooking instruction, hill walking, painting, photography, whatever on offer for a wonderful summer in France (or even on Reunion), so much better than a Saturday morning somewhere inside a London building.

I love the way that the old "Trends" shopfront is illuminated in your top picture. These French classes sound like self-flagellation. You are like a medieval monk lashing yourself for your sinfulness. It's becoming a habit!

I read today that it takes 550 hours to learn French. I'm sure I put in many more than that when I was at school and I can just about get by as long as all I need help in finding my aunt's pen!

I am so glad I've reached a point in life in which people expect me to be lazy, and at which I no longer feel guilty for being monolingual.

Oh, Steve. You are such an inspiration!
Glad you figured out the sea creature thing. Nature really is amazing, isn't it? It wants to live.

Steve, if I were you, I'd ditch the French classes and just practise with Google translate. Treat yourself to a few days away somewhere in rural France and see how you get on ! I think it's the "regimented" learning that puts most people off.

you are certainly persistent. I'd have given it up by now. besides the most useful extra language for me is Spanish. and yah nature is amazing. they live their whole lives in a puddle. makes you wonder what their place in the ecosystem is. kinda like the mosquito hawk, which once it hatches never eats. it lives to mate, lay eggs, and then dies.

On many past trips to London I always saw Odd Bins stores everywhere and I think I only saw one on this last trip. I wonder where people are buying their wine these days.
French is a tough language to learn I'm told. More power to you.

Nature is amazing but now we have to help nature and control global warming. I hope it doesn't take 27 years!

As my dear old Mum (a French teacher) used to say 'Si au debut vous ne reussissez pas
renoncer' To be honest my Mum would never have said that, but my dad did, frequently, but in English. He was a great motivator. I also admit I had to check on the translation as I've spent the last couple of years studying Italian, but now I'm at a standstill as my tutor (a chef at my local pub) died. O sole mio,

He was one of the sweetest men you could ever wish to meet, and he died during my recent 6 week spell in hospital, so I didn't even know. I was so ill that no-one told me. You can't imagine the shock I felt when I found out. Shit happens!

"Olga and these foxes do a sort of continual pas-de-deux, taunting each other with their mere presence."

I'm very impressed by your fortitude in learning French. And it's not surprising, but it is rewarding, what extra practice will do for learning a skill of any kind. So I think you are on the right track!

Glad you're going to keep up your French classes. I never took any except in high school, and skipped most of them because I was the only girl and the teacher called on me every damn day; it was embarrassing to speak French poorly (I thought then). Later I lived in a francophone town in northern New Brunswick and still didn't pick up enough French to understand much, and a year later I lived there with a French-speaking man who always spoke English to me, as did most others because they like to practise their English and were better at it than I was in French. That didn't help me though. It wasn't till I insisted my fella ONLY speak French with me that I quickly got fairly fluent. So I think that is the real ticket to success — daily conversation — but my spelling and grammar are terrible. I should take a class and learn something.

And the French class. Persistence and Perseverance will pay off. I am taking a Positive attitude on your behalf......

Anything else you would like me to take, while I'm about it?

Lessons in punctuation and grammar, maybe?

That fox with it's bushy tale is marvelous. New York, Morocco, London! I must learn more about your life, Steve. And French, ah French. I tried once but failed. I was frustrated by the fact that a phrase can be thissssssssssssssssssssssssssssssssssss long but only "this" much is pronounced.

Good for you! Will your school do anything special on Thursday?

Every time I see the photos from your automatic garden camera I'm really tempted to get one myself.