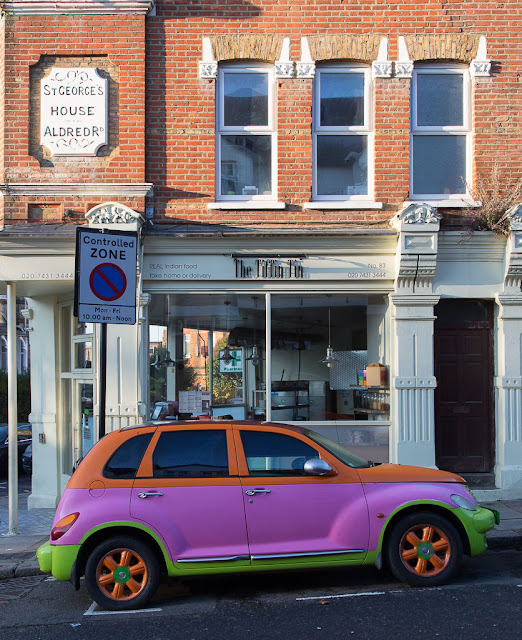 I took Olga to the vet yesterday morning before work. As I mentioned, she tore one of her dew claws Sunday while chasing her Kong toy. The claw bled a little, protruded from her leg at a weird angle and caused her enough pain that she would quiver while lying next to us on the couch.

The vet took one look at it and said, "That will have to come off." So I left Olga with him for the day, and he sedated her, removed the cracked claw (not the entire digit -- just the nail, which will grow back in time) and put a sort of bootie on her foot to protect the wound. He also gave her a round of antibiotics.

That sounds like a lot of drama for what's essentially a hangnail, but hey -- Olga is a dramatic dog!

When Dave picked her up yesterday afternoon, she was still a bit groggy from the sedative. She slept yesterday evening. This morning we'll remove the bootie and she should be good to go, though we cancelled her dog walk today so she could take it easy.

Meanwhile, on the political front, I find myself still wrestling to process last week's election. I've backed away from certain posts on Facebook and tried to limit my news intake to the essentials.

The reality of the situation hits me in waves. One minute I'll think, "Well, let's just see what happens. Don't jump to conclusions. Maybe this won't be so terrible." I'm trying to approach things with a Zen mind of openness. And then I'll wonder how a Democracy can function when voters are uninformed (or misinformed), in a society where news outlets that strive for objectivity (particularly newspapers) are dwindling in a bad business climate of shrinking ad revenue.

And I marvel at the degree of incivility Americans have come to tolerate in our society -- most notably from the new commander in chief. We used to demand respectability and basic politesse from our candidates. How did we get to this place, and where will it lead us?

It's all so surreal.

For the sake of diversion, Dave and I have been watching "The Crown" on Netflix, the new series about the first years of Queen Elizabeth II's reign. Did you know up to 12,000 people died from air pollution in London in a 1952 event known as "The Great Smog"? Let's hear it for modern clean-air legislation. Take note, Donald Trump!

(Photo: A car Olga and I found on our morning walk last Friday. I haven't seen it before or since.)
Posted by Steve Reed at 7:05 AM

History should tell us, all of us, not just the voters in your country, that "let's just see what happens" could be the worst thing to (not) do.
As explained nicely here in yesterday's Washington Post http://tinyurl.com/huzx4d9

Swift recovery to Olga and thank her for spotting that fabulous car.

A couple of old boys I know in Sheffield told me that in the late fifties - when the weather conditions kept smoke pollution hanging about - people would often wear masks in a vain attempt to avoid breathing in the smog. There were many deaths. Nowadays our city is smokefree. Environmental legislation really can save lives.

George ripped his off falling from the bed and catching his foot in the duvet.
Saved a vets bill

And yes, it is disheartening to see what is going on here. I think, though, we should beware the "normalization" of this man...there is absolutely nothing normal about the election of such a person. And Steve Bannon?? Oh my god. And the sight of Rudy Giuliani foaming at the mouth while waiting to see which Cabinet post is handed to him, is just icing on the whole despicable cake.

Hopefully, Olga recovers quickly. As to the other, with plans to dismantle the EPA, I doubt any of us will be breathing easier...

Not to add the last straw to a teetering load, but.. . .
Trump is likely the least of our worries. Take a look at Pence's agendas.

What can we do, Steve? What can we do? I feel as if the monsters have come out of the box and there is no way to put them back.

I started watching the crown yesterday too! i know what you mean about reality hitting in waves. it's so enormously awful what has happened, i can't take it in all at once. i am glad queen olga is on the mend, though. she can be as dramatic as she likes; she had a rapt audience out here.

My neighbor's dog had the same thing happen to him, and he was running around like normal within a a couple weeks. It's still awful, though.

I've been sort of the same way with the election thing. I'm disappointed in the electorate and certain they're going to get something different than that for which they bargained.

Trump will throw out little tidbits of hope and then go on and trash things as he wants or trash them by accident . I know this is the wrong message for you . I should have commented about hope. The only thing I can say is that I "HOPE" it's not too terrible. I don't understand either how people think when they vote for such fools.

That is one very colorful car! I'm glad Olga is okay. You are such a good parent.
My close friend David is the Communications Manager for Central Arizona Shelter Services, the Phoenix area homeless shelter. Just last weekend he had a woman yelling at him about how Trump would shut down corrupt systems like his. She insisted that paying for shelter and food for people who "won't work" (her words) is somehow corrupt. So David has already experienced the incivility that this election has brought forward.
I did not know about that "great smog" event either. I don't think I had ever heard that bit of history before.

worrying about things that have not happened is not productive for me. some say i have my head in the sand..so if i do it is okay. today i choose to be happy.

Glad to hear that Olga is okay. I worry that we'll have the same problem with our dog Dottie who is forever getting her dewclaw stuck in my son's coat.

As someone who remembers wearing a cotton wool mask to help filter the smoggy air of the 1950s and of fog you literally could not see from one side of the road to the other, I with you on the clean air issue. No doubt Trump's environmental 'expert' will say that smog is a liberal conspiracy.

Wouldn't that be more like having a toenail removed? Poor Olga - I'm sure she feels better now than before, and will continue to improve. Glad she has you and Dave to rely on.

There's a CBC article talking about why the media got it wrong with regard to the election (and also, therefore, why a whole lot of people didn't see it coming) Some interesting points in it. http://www.cbc.ca/news/world/americans-vote-out-media-1.3846307

That's a gorgeous, if gawdy, car. So sorry for Olga but trust she feels better now.

Environmental protections are about to be cheerfully gutted by the T---p administration. They're already promising it.

Love that car. Would be very happy to drive it about- but maybe not in London.

Sabine: Thanks for the Post piece. I agree we must be vigilant, but at the same time, I'm just not sure what we can do at this point. Trump was elected. He has the ability to hire whoever he wants. Half of the American population asked for this. Perhaps it's just a startling lack of imagination on my part, but all I can think to do is wait until they take action we disagree with and then protest that -- somehow. (And even then -- what do we do? As sick as the Iraq war made me in 2002, I couldn't do a thing to stop it.)

YP: Truly, the value of environmental laws is demonstrated to us every day, but most people are too young to remember how bad it used to be. They did show people wearing masks in the TV show. Like Beijing!

Elle: I agree. We cannot regard this situation as normal. At least Rudy ran a major American city. I don't like him at all, but he has some administrative and governmental experience, which is more than can be said for some of these idealogues.

Marty: I know! He could be worse than Trump in some ways.

Ms Moon: Honestly, I do not know. We could protest, but would it achieve anything? And is it even the right thing, in a country where the leader was elected? Again, I kind of feel like we have to wait for them to do specific things we don't like and then try to fight those decisions.

Nasreen: Well, that's true. As I was telling someone the other day, if they think Trump is going to make their lives better in working class, Rust Belt communities, they've got another thing coming. Maybe disillusionment will set in quickly. We can only hope.

Sharon: Sorry about David's experience. How does that woman know his system is "corrupt"? It's so strange how so many people have suddenly decided that being kind is a bad thing, a weakness. It's the language of fascism!

Vivian: Well, I kind of agree with you. We can all let our imaginations run wild, but I need something more concrete to latch onto. I think we need to resist the bad decisions as they arise -- somehow. And again, I'm not quite sure what we should do or what would be effective. In a way, the die is cast now.

Parrots: Good grief, I hope we're not going back to those "mask" days. I wonder if you could trim or clip Dottie's dewclaw to make it less likely to snag in the coat? Would that work?

Jenny-O: Thanks for sending me that piece. I haven't read it yet but I will. And yes, you're absolutely right -- she basically had the nail removed. Which WOULD hurt!

Catalyst: Yes, she is MUCH better. Isn't that a great car?

Jennifer: We have to fight it, every step of the way, in any way we can.

Alphie: I wouldn't want to drive ANYTHING in London. But at least in this car you could be certain that other drivers will see you!