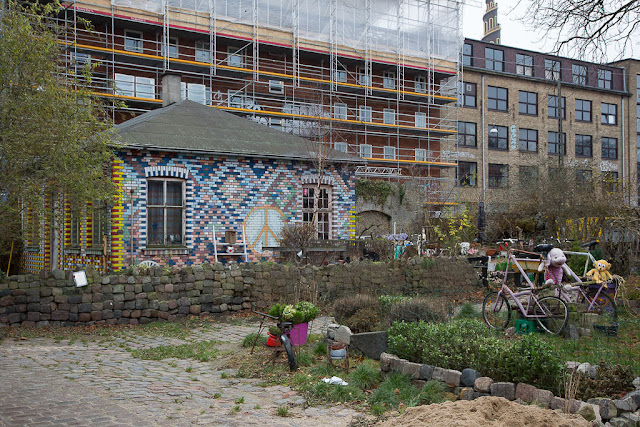 Yesterday Dave and I bought a ticket for those city tour buses, so we could more easily access distant parts of Copenhagen. Our first outing was to the "free city" of Christiania, which operates as its own little island of self-governance within Copenhagen proper. It's a hippie community that is traditionally soft on mild drugs and known for its street art. 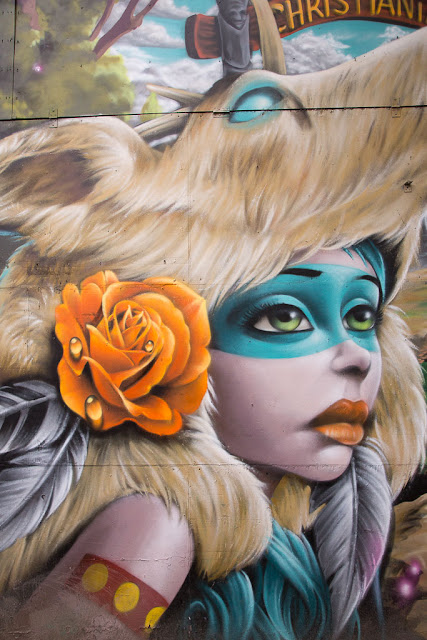 There were some interesting murals, but the wind and chilly temperatures were biting and we didn't linger too long outside. We adjourned to a cafe for a big mug of hot coffee, and it's a good thing we did because when we went out to catch the bus again, it took its sweet time arriving. 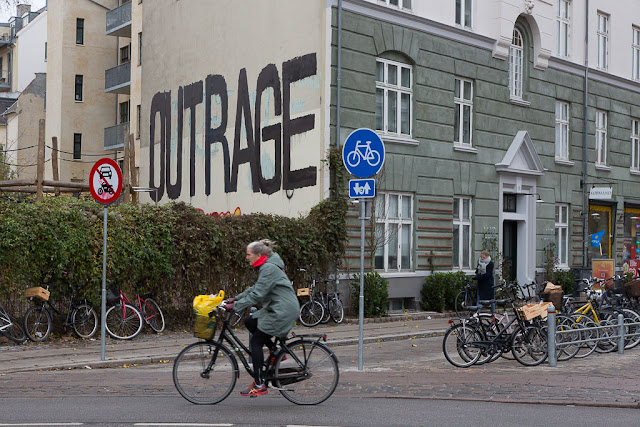 Dave and I stood on the sidewalk for almost an hour. Even using a nearby wall as a windbreak, I was chilled to the bone by the time that damn bus arrived!

When we got back to central Copenhagen, Dave retreated to the hotel to soothe his hypothermia. I got on the next tour bus for another destination -- the Carlsberg brewery, where I wanted to see the famous elephant gate. 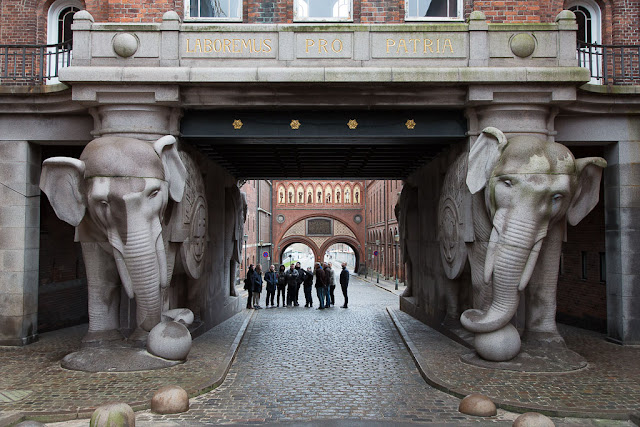 The brewery is a huge complex surrounded by construction, and it took me a while to find the gate, but I eventually got there. Then I took a long walk northward to Nørrebro. As long as I'm moving I don't get cold, and I had a great time walking amid the swirling leaves, listening to Astrud Gilberto on my iTunes. 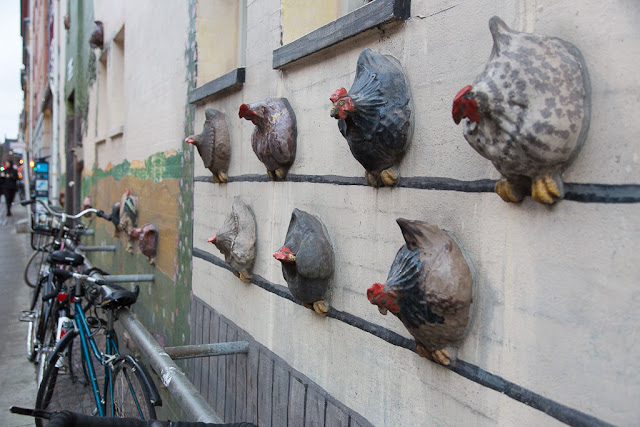 I found a very peculiar building that made me think of Ms. Moon, because it had chickens protruding from the walls.

I ended my walk with a beer at Pussy Galore's Flying Circus, one of at least two bars in Copenhagen named after Bond girls (in this case, with a bit of Monty Python thrown in). I managed to hit both of them in the same day -- the other, Honey Ryder, is located in our hotel, and Dave and I went there before dinner!

We ate last night at Restaurant Kokkeriet, which was fabulous. Today, back to London, where Olga has cuddled right up to her dog-sitter. I've seen photographic evidence. She apparently doesn't miss us at all!
Posted by Steve Reed at 7:15 AM

I bet the residents of Christiania sometimes feel like a zoo attraction.

"Hey mom, those Danish hippies are looking at us! Can we feed them mom? Can we?"

The Carlsberg elephant gate is so famous that I had never heard of it but it is indeed impressive.

Like YP, I'd never heard of the elephant gate before, but a great photo. Did you see any examples of the swastika that Carlsberg used to use as a logo?

Except for the cold, you've had a wonderful tour, would love to know more about Christania...

The elephant gates! Oh my goodness! That's magnificent! And of course I love the chicken wall. Thank you, Steve!

Those chickens are delightful.

I was there almost ten years ago - fond memories. The elephants themselves have the swastikas intact:

Good on you for persisting and walking in the cold to see things. You take the opportunities when you can.

I've never even see a photograph of the elephant gate before. That is amazing. Sounds like you got to see a lot in spite of the cold. I'm sure Olga will be happy to see you home again.

I may have to go to Copenhagen but I think I'll wait til summer.

Those elephants are impressive - and I thought of Ms Moon, too, as soon as I spied the chickens :) Olga's just trying to make you jealous and get home sooner!

The elephant gate was also new to me but it is wonderful and I'm glad you visited it. But with the weather the way it was I'm thinking a nice hot Irish Coffee would have been better suited than cold beer.

YP: Yeah, apparently Christiania gets something like a million visitors a year! I'm sure the residents DO feel like zoo attractions. And when I say the gate is "famous," I may be overstating things a bit. I actually hadn't heard of it either until I read about it in the guidebook. But it's so impressive it SHOULD be famous.

Parrots: Yes, as Jesse points out in his comment, the swastikas are still around and are even on the side of the elephants themselves. There are four elephants, by the way -- two facing in each direction.

E: Christiania is an interesting little area, sort of a squatter's colony that has grown into a full-scale political experiment. Apparently the government of Copenhagen has been cracking down on it, though, and there are questions about its long-term survival.

Nasreen: Aren't they? So quirky.

Jesse: Yeah, I saw the swastikas too! I don't know the history behind Carlsberg's use of them, but I assume they're used in the Indian cultural sense -- I remember seeing lots of swastika shapes in India.

Red: Absolutely! You only live once!

Sharon: It really was amazing. The minute I read about it I knew I couldn't let it pass without seeing it.

Ellen: I bet it's terrific there in the summer!

Jenny-O: Every time I see chickens now on my travels, I think of Ms. Moon!

Catalyst: The Danish serve something called "glögg," which is basically hot mulled wine, and that's pretty terrific too on a cold day!

I forgot to mention the part that Louis Pasteur played in making Carlsberg such a successful brand.