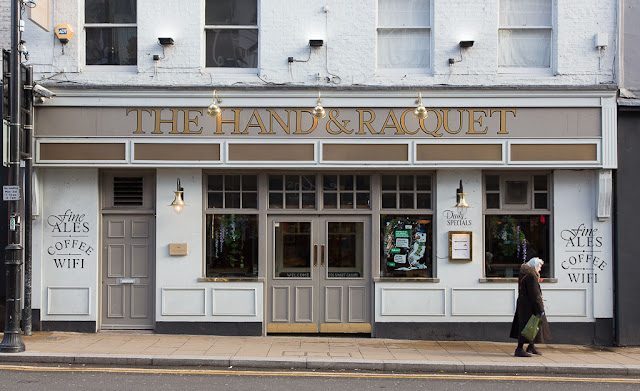 A few more photos from my walk Sunday through Wimbledon and Richmond. Above, a Wimbledon pub -- appropriately named, considering the local sport of note.

My mission for the day was to go to Richmond Park. It's the largest of the eight so-called Royal Parks, and includes forests, nature reserves and wildlife conservation areas as well as a golf course, hiking and biking trails and other activities. 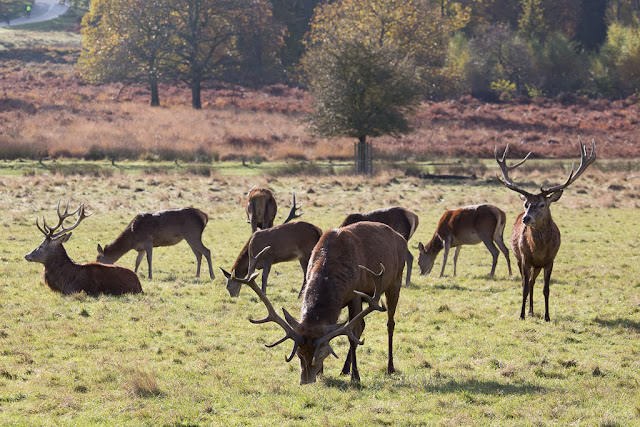 It's best known for its herds of deer. This group was just hanging out in a field, grazing and wandering. People were getting pretty close to them -- closer than I felt comfortable getting, because they are wild animals, after all, with big antlers -- but the deer seemed accustomed to the attention. 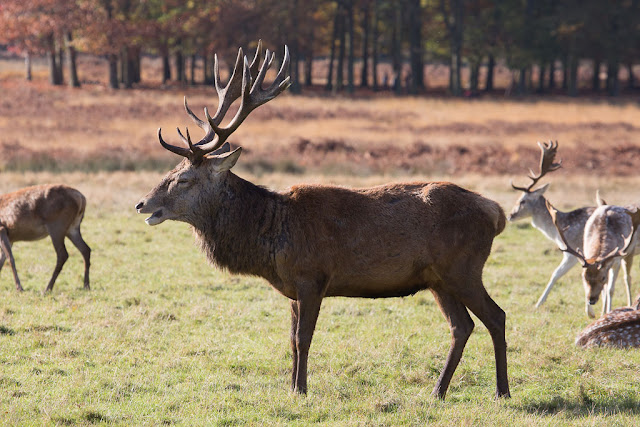 After seeing the park, I walked through the town of Richmond, which sits on the Thames just south of Kew Gardens. There's a pretty park on bluffs overlooking the river, where I found some poor woman's bank debit card lying on the ground. I called the bank using the number on the card and asked them what I should do -- they told me to cut up the card and they'd cancel it and send the owner a replacement. So hopefully I kept someone from being defrauded. 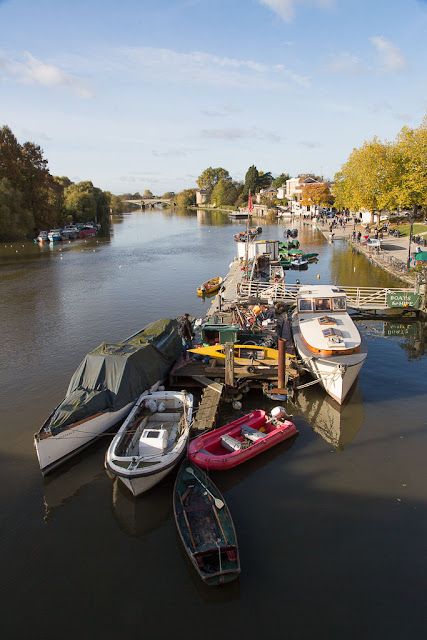 Here's a view of the river from one of the bridges in town.

I was going to stay in Richmond for lunch, but despite the fact that it was about 2 p.m. and I'd hoofed it 7.5 miles, I wasn't that hungry. So I just took the tube home and ate there. All in all, a good, long walk on a beautiful (and rare, for this time of year) sunny day!

We're having a little drama at home this morning -- a few days ago Olga injured the dew claw on her left front foot while chasing her Kong toy. Last night it bled a little and now she seems to be in pain, so I'm taking her to the vet today. I think she may have a little infection going. I'll give you an update tomorrow!
Posted by Steve Reed at 5:23 AM

It looks so beautiful in your part of the world. I wish that I could visit! Good luck at the vet with Olga!

Poor little Olga. I hope she is okay. Perhaps you should consider getting her some dog shoes. See this link:- http://canineconcepts.co.uk/en/dog-boots/4239-waterproof-dog-boots.html

I love the field of deer. And the river with boats. What a beautiful place you live! I think it's so wonderful that you take advantage of it and explore it on foot. Thanks for sharing it with us.
May Olga be okay. I'm sure she is.

I wondered if you would see any of the famous Richmond Park deer. Not only did you see them, you got some great photos of them. 7.5 miles is a good long walk! I probably would have had to stop for lunch not because I was hungry but to warm up. I was there three years ago at this time and I remember how cold I was. Heck, I was in coat and scarf in September and October when I was there while most people were still in shirt sleeves.

I wasn't aware that there were large park areas set aside in London. It's good that you take some time and wander through part of it.

how nice that they have those royal parks. I expect our national forests and nature preserves will be sold off to the highest bidder.

The lady that lost her debit card was incredibly lucky that you found it. The odds against anyone honest finding it must have been astronomical. Such is the world we live in. Poor Olga, I hope she gets better soon. Sending her healing thoughts. Take care of yourselves. Blessings

Wow - those deer are a whole lot bigger than the ones that visit us! Great shots of them. Hope Olga heals quickly. And I agree with Lesley, the owner of that debit card is lucky and no doubt very grateful it was found by an honest person.

I was going to say if those deer were in the U.S. they'd have been shot by now. But then I was looking at a map and found that this was on a nature reserve. Beautiful pictures of them.