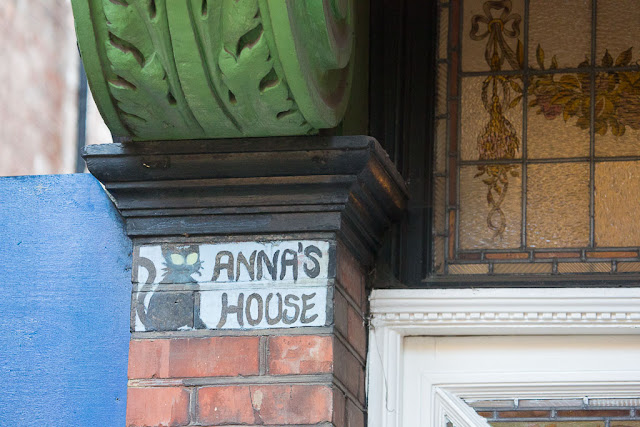 With Thanksgiving tomorrow, we only work a half-day today and we have no students. It's just meetings and administrative stuff. Thanksgiving isn't a British thing, but since we're an American school we follow the American calendar!

Here are some random pictures of stuff I found interesting yesterday.

First, I love the little feline sign above the door on Anna's House. It's right near our flat and I'm sure I've walked past it a million times, but I didn't notice it until yesterday morning. 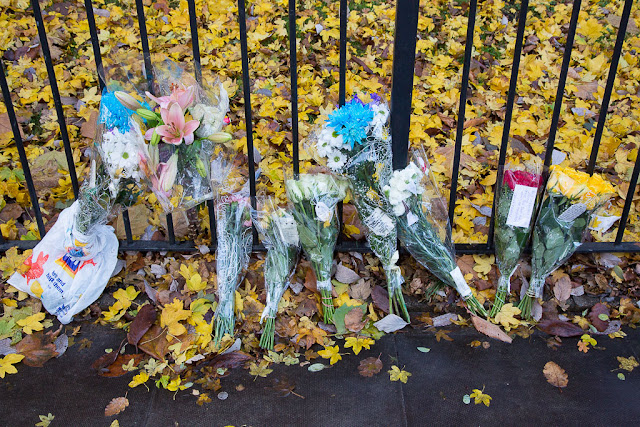 Last week, when I was walking home from work, I passed police cars surrounding what looked like a covered-up body on the pavement on Abbey Road. I have no idea what happened. I've tried to look up news coverage and can't find anything. But there are bouquets at the site now, left in memory of someone named Terry. 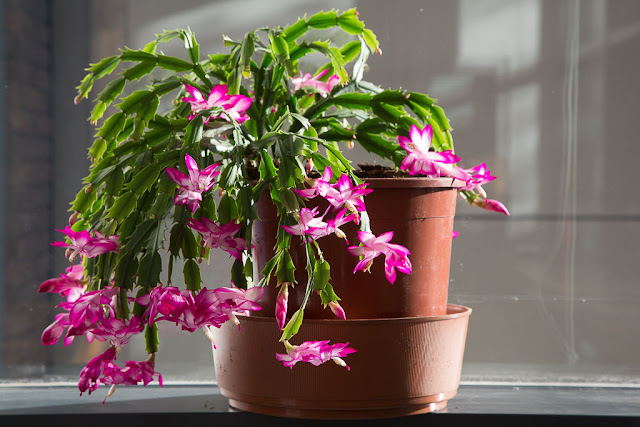 Our Christmas cactus at work is blooming profusely! 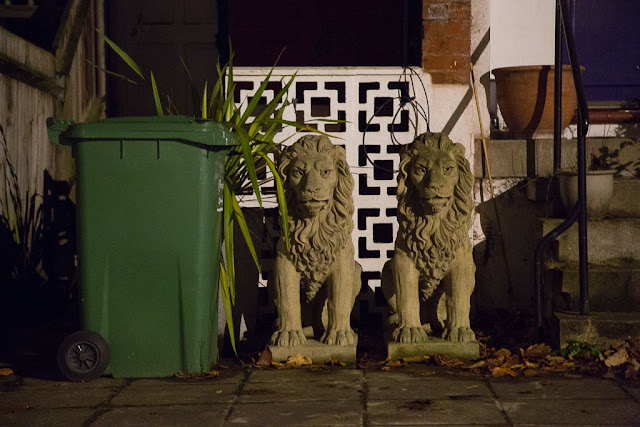 And finally, the occupants of a house I've photographed frequently on our street seem to have moved. They've been throwing away a lot of stuff and last week a van was out front, with removal men hauling boxes. I'm sorry to see the house change hands, because there was always an interesting assortment of stuff out front, including a bench, an old bicycle and two large cement lions. It made for good photos.

The lions, however, appear to be sticking around. They've moved a few doors down to another house -- perhaps they were gifts from the neighbors!
Posted by Steve Reed at 6:13 AM

I love the lions! They really should be sitting on top of brick gates posts of a long driveway.

When you hang your head and give thanks before tucking in to your Thanksgiving meal, remember to include Trump & Pence in your prayers. After all, they are going to "make America great again". By the way, when did it stop being great?

Oh, Annie. I want to have tea at your house!

P.S. Mr. Pud: We feel as bad and scared and terrified and horrible as we possibly could already. Just to let you know. You needn't keep reminding us. It's not even funny. At all. I'm sorry.

I'm sorry you had to see a body, probably. I mean that you probably saw one, not that I'm probably sorry.

I saw one a couple years ago and wished that I hadn't.

The lions are fantastic, though. There ought to be more concrete lions around in the world.

Happy Thanksgiving. My Christmas cactus hasn't even started to think about blooming.

oooo. I was gonna say I hope you grabbed those lions but I see they weren't set out for the taking.

Those lions are great. I'm glad they have a new home in the neighborhood. Sad about the person on Abbey Road.

Happy Thanksgiving. I hope you and all your friends have a wonderful time. It's sometimes good to take a few minutes to remember we actually still have much to be thankful for. I loved the lions. When I go to auctions I always bid on any that are for sale, but I'm always outbid. The black cat reminded me of when I lived in Gt Yarmouth. My father had a shop on the main Street and we lived above it. Yarmouth was well known for its rows, alley ways that were just wide enough to let a small cart move through. We lived opposite one called Kitty Witch's Row. In the middle ages a witch was supposed to live there, but when the righteous burghers of the town tried to catch her, she turned into a black cat and escaped. during one of these chases a stone was thrown at the cat and it's leg was injured. The next time Kitty appeared she had n injured leg. I'm not sure what happened after that, but there was a pub named after her on the site, It was really spooky, and even into the 90s the loos were outside down a very dark alley way. Boy, it took a few gin and tonics to persuade me to visit them , but the G&Ts made it necessary, too. Memories!

Help,Google is giving me the runaround. They wanted me to sign in to leave a comment, then they kept saying my password was invalid, and then I remembered I restored my laptop a few days ago, and all of my passwords had reverted to old ones. and could I remember them? Silly question. Eventually I did, and G&T was the answer, and I don't even care what the question was. I think I'll retire to a dark room now, and start counting my remaining brain cells (the ones that are working, that is.

Is it just the shadows or is there a black cat to the left of the compost bin in the last photo?! Eeek - especially after reading Lesley's ghost tale!!

I am always moved greatly by those public and often spontaneous grief flowers......

To Mrs Moon - Who's this "we" and "us" to whom you refer? Trump and Pence will not just impact upon Americans but on other nations too. Your comment to me suggests you don't fully appreciate the concept of irony.

I too love Anna's cat and the cactus, which puts the one I have downstairs to shame. And drag those lions home to your place Steve; it's not that far. Just look at the expressions on their faces!