Thinking Through the Trump Juggernaut 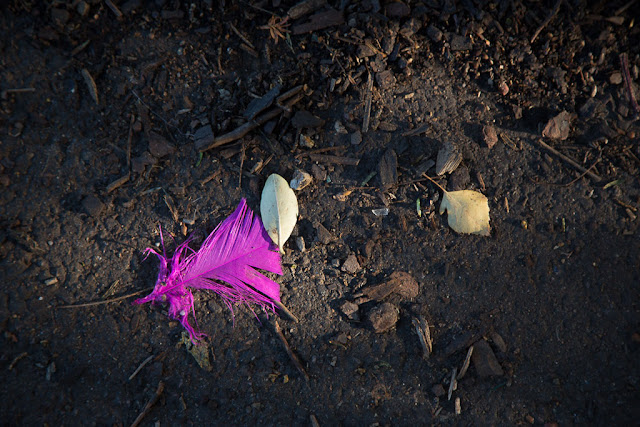 Yesterday was a day of coping, of processing -- not just for me but for a lot of Americans who thought Hillary had it in the bag. News outlets in particular were trying to figure out how they got it so wrong. There were questions about the reporting, polling and statistics that led The New York Times, for example, to put Hillary's chances at better than 90 percent at times. I am frankly quite angry with my trusted news sources, and people like David Brooks, who a month ago confidently called Nov. 9 "the day after Trump loses."

Was Hillary derailed by outright misogyny? Well, perhaps partly. I kept thinking about remarks made by Bishop Gene Robinson back when I met him in 2008, about the fury of the subsiding male patriarchy, and the link between that anger and homophobia. It's not surprising that the same angry patriarchy would resist a woman -- and yet a lot of women voted for Trump, too. As Dave pointed out to me, women can also be sexist, believing they should follow their husband's lead -- or their church's -- at the ballot box. But clearly that doesn't explain everything.

People are just desperate. That's the bottom line. And Hillary admittedly wasn't the strongest candidate with a lot of Americans, who believe her to be somehow duplicitous and self-serving. I don't see it, but that's just me.

I was in a mood of mourning for most of the day -- stunned, sickened disbelief. Of course, I come from the same New York bubble that so confidently predicted her victory. I move within those circles even now, here in London. So it's no surprise that to me, the whole thing seemed like a bolt out of the blue.

I posted a lament on Facebook, linking Trump and Brexit and the growing rise of nationalism. One of my friends replied, "Maybe globalization has been good to you, Steve. Evidently to many it has not." This just pissed me off a little bit. My entire career got torpedoed by a round of job cuts in 2009 -- admittedly linked more to the changing media climate than globalization, but it's all part of the same march toward modernity. I'm now in a job where I make a fraction of what I used to make. Am I better off than some people? Maybe -- I don't have kids to educate or a mortgage to pay. But I've designed my life that way. It wasn't accidental.

I would say I survived globalization. I'm not sure I've prospered, but I've coped. I certainly don't see how supporting Trump addresses the ills of the changing economy. 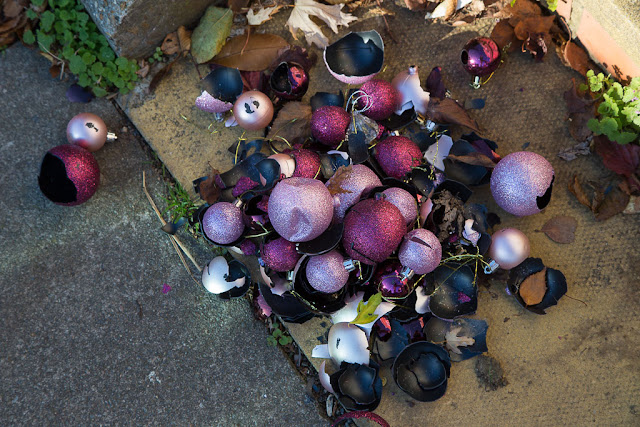 But now I have to move on, as do we all. We have to learn to live with this. (Friends in the U.S. keep saying to me, "Well, at least you live overseas!" And that's true -- adapting may be a bit easier for me. But Trump is still the leader of the free world. He'll be in my face just as much as he'll be in yours.)

Yesterday, as Dave left for work, I said to him, "Thank God you're not a Trump supporter."

He replied, "That would be grounds for divorce!"

(Photos: Sidewalk debris I found while walking Olga on Sunday.)
Posted by Steve Reed at 7:28 AM

Who would have thought this would have been the outcome? Enough voting people in the USA it seems.
I shall watch with great interest as events unfold in times to come. I may not be a US citizen but I am interested in world events and this is a big one.

I have a feeling that talking only to others who agree with us keeps us from seeing anything that might be illuminating. And the very fact that nearly half the voting population chose what they saw as an agent of change seems to me to be an indication of just how desperately they wanted that change. Don't misunderstand me; I do not agree with or support Trump's views or behavior. But there has to be a reason why otherwise perfectly sane people voted for him. Everyone can do his or her small part to figure it out by talking and listening to those people. Just my two cents' worth.

So heartfelt and raw. Thanks for sharing Steve.

Could it be that the pollsters were playing a massive Republican trick to lull Hillary Clinton's constituency into the false belief that they were already over the line? This may have kept a lot of African Americans and Hispanics at home.

My sincere condolences for you, for America and for all of us. 2016 will down as the year that the world was struck down will a collective madness that threatens our ideas of democracy and decency.

The Tampa Bay Times reported large crowds protesting in the streets in several cities across the country demanding that the popular vote be upheld over the electoral college results, a first, though I don't think it will do anything except ultimately create more frustration. Our voting system needs an overhaul.

It occurs to me that people who voted for Trump actually are desperately afraid of change. The sort of change that so many of us fight for- rights for people of all colors, religions, genders, sexual orientation, countries of origin, etc.
"Make American Great Again" actually means "Make America Straight White Male" again.
Why do I even say these words?
Duh.
Perfect picture.

Except for the Rust Belt, the electoral map looked a lot like 2008 and 2012. Had Mrs. Clinton won the Rust Belt states, she'd be President come January.

But I'm probably just trying to rationalize it. I've been a little numb, and reading this, it sounds as though the feeling is global.

you can't always believe what is said in the news. it is over, he won, i am tired of the mean spirited people.
i choose to think positive.

Trump's presidency will bring new meaning to the term globalization as the world is assaulted by his decisions (assuming, of course, that the man is capable of thought) over the next four years.

I spent most of yesterday away from all the news sources and social media. I'm still trying to figure out how to deal with this. One thing is certain, I've been through many elections where "my guy" didn't win but I was always ready to accept and move on. I've never felt like this before over an election.

Mourning is a good description of what's going on for many people. The main thing is that you are keenly aware and involved in politics.

When people are hurting they need someone to blame
Trump blamed a great deal...I hope being the commander in chief makes him a little more optimistic

I would love to believe that women could get by voting against their husband's choice or the church's choice. Sheez, if not we have not "Come a long way baby." :(