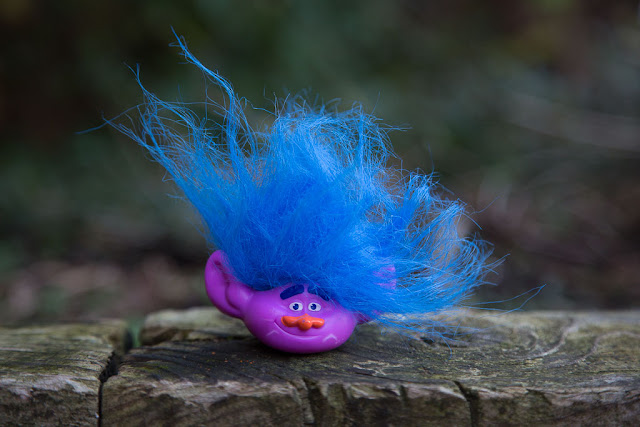 You may think, from the title, that this post is about Internet trolls. But no, it's about actual trolls -- the toy kind, with the wild hair. Remember them, from the '70s? I guess they're still around, because while Olga and I were walking yesterday morning, we came across this blue-haired guy lying on the ground.

Olga gave him a sniff but didn't seem otherwise interested. I set him up on a planter where whoever dropped him will hopefully see him more easily. 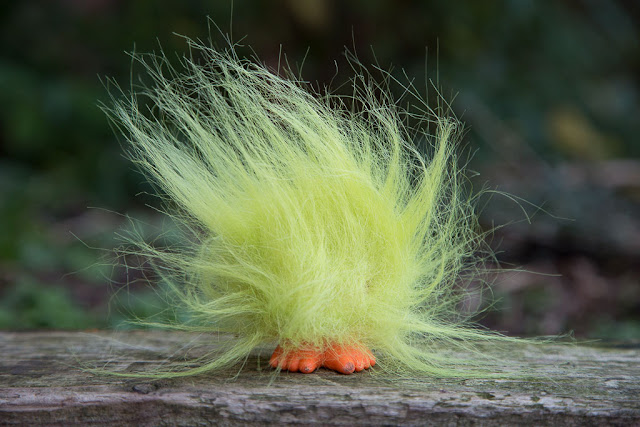 Nearby, we found his Cousin It-like friend. I put him on the planter, too.

As I often say, you never know what you'll find while walking the dog.

I had an incredibly busy day yesterday. Tons of stuff coming back to the library after the break, and tons of people stopping by my desk to chat. I'm one of those very public people at school, always sitting out in the open, and I consider it part of my job to make time for people who stop by to talk. Consequently I felt like I was getting pulled all day in this direction or that. I was frazzled by the time I got home. If I had hair, I would have looked like one of those trolls.

I haven't mentioned politics lately, but of course that's at the back of my mind, too -- my lingering sense of dread regarding our world leadership. I don't know about you, but I have friends who have been seriously incapacitated by the American election. A couple of my colleagues can barely function. They're prone to crying in the hallways.

My personal coping mechanism is to clearly recognize what I can and cannot do and/or change. The election outcome is awful, but under the American system, Donald Trump is (almost certainly, despite recount efforts) the legitimate winner. Lots and lots of Americans wanted him -- a winning assortment of Americans, under our system. There is nothing for those of us on the losing side of history to do but bite the bullet and live with him, and respect, if not the candidate himself, then the wishes of our fellow countrymen and -women. That's democracy, right?

People say we can't normalize him, but the fact is, we have to -- to some degree, if only just to move on with our lives. We don't have to roll over completely. We can guard against the darker impulses that helped fuel his rise -- the racism, the xenophobia. I'm seriously weighing some Christmas donations to organizations that will fight for causes I believe in, now possibly under threat. That's something I can do.

Meanwhile, as I've written before, I'm also trying to remain open-minded. We really don't know much about how all this will unfold. I'm trying to make room for the possibility that it won't be terrible. The system itself is built to protect us from an inept leader. I'm not sure it's healthy to prematurely expect or anticipate disaster.

Admittedly, I do shudder every time Donald Trump issues another tweet. (I don't use Twitter, but I do read about his tweets in the paper.)

And hey, look at that -- this post did turn out to be about an Internet troll!
Posted by Steve Reed at 6:54 AM

When I was a schoolboy there was a pencil in my pencil case with a white troll on the end of it. He had purple hair. I should like to stick Donald Trump on the end of a giant pencil and watch his orange hair sticking up like troll hair.

I'm to the point where if we don't get into a nuclear war in the next four years, I'll deem that a success.
I like what YP said. Me too.

I liked your comment on my "can't cope" post very much. Yes, coping is the new radical and I for one will try to become an expert in it.

When I think of DT and his Twitter tantrums, my blood boils. America as elected an Internet troll to be our next president.

there's a new movie out about the Trolls. re politics, I really have no hope that things won't go at least partway down the tubes. I mean, look at the people he is selecting to hold positions in his government, granted congress has to approve his appointments but still. Petraeus? who is convicted and currently under probation for passing confidential information to his mistress for Secretary of State? and they howled and howled about HRC and her private server and accusing her of the same (regarding confidential info) of which she was cleared. and his other choices? OMG. we are in for a shit storm. already people over here feel emboldened to harass and harangue and verbally abuse and assault any stranger they think voted for Hillary, bragging that this is Trump's America now. if any good is coming out of this it would be that people are standing up to these bullies, intervening and protecting their victim, sometimes just one person, sometimes whole groups of people. there a FB page where these people are telling their stories.

I echo Ellen. It is a disgrace, and it is just beginning.

I'm feeling much the same as you that surely our system will keep things under control. However, every time I watch an episode of the old TV show "The West Wing" on Netfix, I get this sinking feeling knowing that he is just not up to the job. I can't picture him in the situation room weighing the information at hand and making life and death decisions. It's scary.

Trump will always make idiotic outrageous comments. Hopefully there will be cooler heads around him that will contain some of the lunacy! Now I'm Canadian! Why should I care? Canada and the Americans have always had a good relationship. It's important that it continue.

The thing I fear is (as Ellen alluded to above) these lunatics who have come out from under their rocks and feel they are now in control. And they are armed!

You have the luxury of living away from all of this, so it is easy to say that normalization is the way to go and our wonderfully corporate-owned media is sparing no time in doing so. I hope whatever opposite-thinking forces there are can rise above all of the racism and all of the other evident "isms," but it seems that all of the progress we've made for as racist and classicist as we are, is about to be undone and with potentially disastrous consequences.

I'm thinking pretty much along the same lines as you are, Steve, although I do wonder if some of it for me is what e says - not living in the same country makes it easier to detach. Maybe partly, and partly not.

Trolls were around when I was a kid, when my kids were kids, and now here they are again. It's just like fashion - wait twenty years and it'll be back in style ... with just enough changes so you can't REALLY keep all your old clothes and wear them again ... or all your old trolls to re-sell them and make a fortune :) And oh yes I DO have my old troll!! It had long shiny hair instead of fuzzy hair. Just saying.

My favorite aunt had a troll & I coveted it. She ended up giving me a smaller one for my birthday one year. It's still in cabinet in my dad's house. Oh, and hey, I think it has orange hair! Ha!

I'd rather a troll than T***p. We can weather almost anything, but the danger now is that one of the checks and balances to protect everyone is that usually an executive branch does not have the full support of the Congressional branch. That's not true here. They can do pretty much whatever they want, and if that is to destroy the environment, that is something we won't get back. Or Social Security and Medicare. Otherwise, we can probably recover, but as those are their top three targets, they actually can do irreparable harm. If it were only conflicts of interest and corruption, it would not be so frightening.

John: I rarely, if ever, get trolled on my blog. But I shouldn't boast!

YP: LOL, I had a pencil like that too, and I fear we'll see plenty of Trump's hair sticking up before it's all over.

Ms Moon: It's appalling that THAT is the baseline measure for success, isn't it? But I'm with you!

Jennifer: My blood boils frequently these days. I have very sterile blood.

Ellen: It's going to be a time of painful change. I don't mean to minimize that. I hope the damage can be somewhat contained by time and the slow turning of bureaucracy. I've read that one of Trump's biggest hurdles will be the employees in the federal government who will no doubt work as slowly as possible on his dismantling projects -- a sort of willful work stoppage. The individual cases of harassment are appalling, but at least there's some resistance -- and let's hear it for resistance, in whatever forms it takes!

Elle: I agree, it IS a disgrace. I don't mean to minimize the severity of the problem. I'm just trying not to panic prematurely.

Sharon: I know, I struggle with that same image. I think he'll be bored by it all.

Red: Canada will undoubtedly be affected by Trump, as will the rest of the globe! So it's important that you care, too. I hope you're right about cooler heads around him, but when he gets on his Twitter account at 3 a.m. and starts blasting away, those cooler heads are all asleep!

Catalyst: Yeah, that IS scary. I don't know what to do about that. But we've enabled those lunatics for years with our looser and looser gun laws.

E: Well, I don't feel that living outside the US is THAT much of a luxury. I think what Trump does will affect me almost as much as it affects you. The US is the model for Western culture, and trends there tend to repeat elsewhere. His moves will (and already have) embolden the right everywhere.

Jenny O: The rightward shift that Trump represents goes beyond borders. We have to work against it as best we can, while at the same time coming to terms with it for our own survival and sanity.

Bug: You should collect it from your dad's -- it's probably worth money these days!

Rafe: I agree, and I understand those dangers. My hope is that even Republicans may not go along with some of Trump's loonier schemes. I also think on issues like the environment, we've been sticking our finger into a bursting dam for decades and not addressing the real problems -- primarily the dramatic explosion in the human population on Earth. (And that's a whole other blog post!) Keeping the EPA and working on climate change is important, but it's NOTHING compared to addressing human population issues, which are at the foundation of all of these problems.