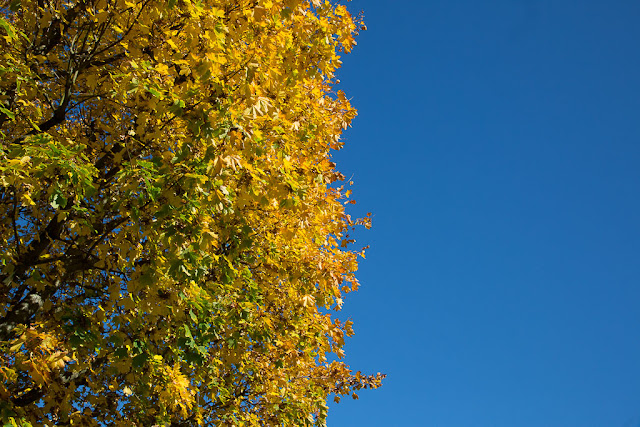 We had an amazing morning yesterday -- crisp and cold, with a cloudless blue sky. (As I overheard one woman say into her telephone as we passed on the sidewalk: "It's beautiful, but it's FREEZING!") I took Olga for a long walk through the neighborhoods north of us, up past Cricklewood. We wound up at the rather unfortunately named Clitterhouse Playing Fields, a wide-open expanse of grass littered with stray fireworks wrappers and sparklers and other remnants of Guy Fawkes Night (which was Saturday). 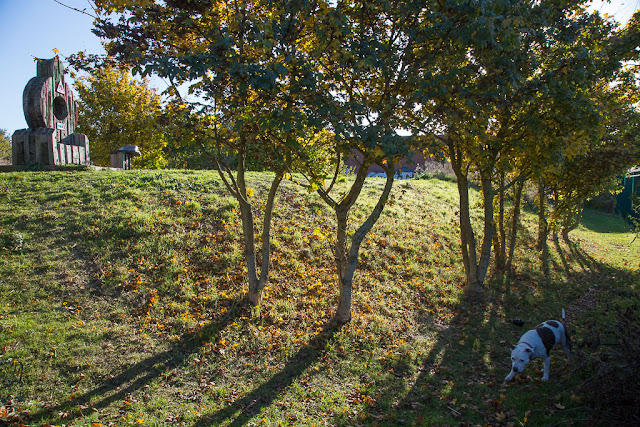 We also found a peculiar little park by the railroad tracks called Millennium Green, with seemingly random pieces of wooden sculpture placed throughout. I'm sure they serve a purpose but I didn't stop to figure out what it might be. (I think they're benches.)

Olga was really wired, I suspect because she didn't get a walk on Saturday, and we walked a long way. There was a lot of Kong-chasing, too.

We got back home about 11 a.m. and Dave and I went to the high street for brunch. Unfortunately, all of West Hampstead had the same idea, so it took us a while to settle on a place that wasn't packed. We finally went to Moment, a vaguely Israeli-themed cafe where I had a good old-fashioned English breakfast -- except that it was vegetarian and came with a bagel.

I Skyped with my mom in the afternoon -- she's been incommunicado for several weeks because her computer (specifically, her computer cord) has been on the fritz. So finally we were able to have a conversation. She said her friends chide her for not being more responsive to e-mail and phone messages, and I told her, "Well, they're right!" I'm glad I'm not the only one who has trouble getting ahold of her.

Last night we watched "How to Marry a Millionaire," from 1953. You have to overlook the retrograde politics, but the team of Lauren Bacall, Marilyn Monroe and Betty Grable is pretty hard to beat. Lots of exotic dresses (gowns by Travilla!) incongruously paired with an overall celebration of the common man -- just in time for the Democrats to win on Tuesday.
Posted by Steve Reed at 6:50 AM

A Democrat win on Tuesday... that's what the world needs right now. Let's hope the FBI turnaround does the trick to push Hillary over the line... then Trump can go running off with a rubber kong in his mush. No doubt it will have "Trump" printed on the side like the towers, the casinos, the golf courses, the hotels, the private jet and his dictionary of nonsense. What a truly horrible man.

A Hillary win: from your keyboard to the polls, I hope.

On the subject of old movies, I just caught Born Yesterday this weekend, starring William Holden and the genius of Judy Holliday. I could watch that movie over and over again just for her, but there were many shots on location, and I so much enjoyed seeing the Washington D.C. of my youth.

I'm barely holding on here in the US, fearing so for this election.

Little hidden away areas are always a surprise when we blunder into them. Yes, we have more than a passing interest on the American election. Policy changes can have a big effect on us.

we're going to the movies today to see Dr. Strange. should probably have left it for tomorrow. regardless, I am not turning on the TV tomorrow. I'll find out Wednesday morning.

Oh my goodness, that is an unfortunate name for a park. I love YP's description, "dictionary of nonsense". So true!

Dictionary of nonsense indeed and I won't be online tomorrow either...

In my house we will be OBSESSIVELY checking election results tomorrow (after we get back from having Mexican food for dinner). I'm feeling pretty hopeful of a Clinton win, but I'd like to see some good Democratic down-ticket action too. We'll see!

That blue lighted my farting spirits

From your mouth to the gods' ears...and I will definitely be checking results. It better be good!

I found the little park to be so intriguing I googled it and found that it is one of 245 Millenium Green parks created in 2000/2001. Amazing story. The land is supposed to be kept as a park for 999 years, and each park is supposed to have some kind of artwork in it. Hence the pieces you saw, I guess. I think it's a wonderful idea.

Beautiful photo of the leaves and sky!

I read today that a number of Donald Trump effigies went up in flames on Guy Fawkes night. Maybe more tomorrow night on our side of the pond.

YP: Amen to that! "Dictionary of nonsense" -- I love that.

Marty: I love "Born Yesterday"! I haven't seen it in years and years. Maybe we should rent that next!

Red: Maybe you all need to build a big, beautiful wall along your southern border! :)

Ellen: That's how I've handled most recent elections, but we're thinking we may watch this one unfold. We'll see!

Sharon: I know, it IS true. He speaks in fragments and, as others have said, "word salads."

E: Well, go online at some point, so you can celebrate!

Bug: I'm hopeful too -- and yes, I hope it carries down the ticket. A Democratic Senate would do a lot to ease Washington gridlock!

Jenny-O: I am SO GLAD you looked that up! I didn't know the history at all, though I have seen other Millennium-themed parks, so that makes sense. I figured it must be something that was created around that time.

Catalyst: Yeah, I kind of wish we'd attended a Guy Fawkes celebration where we could have seen that!