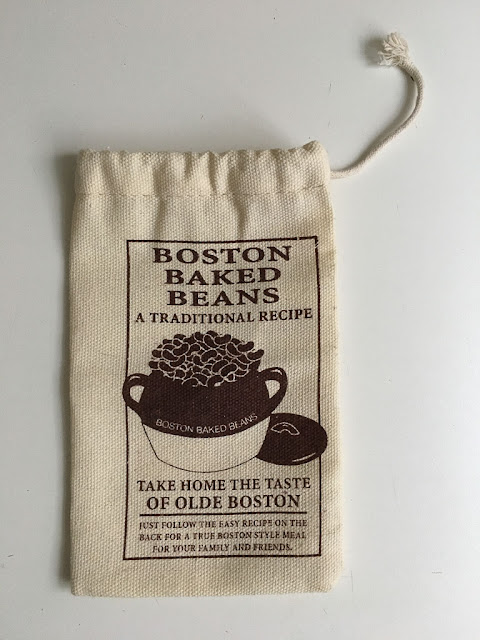 Last spring, sometime toward the end of the school year, a mysterious bag of beans wound up in the library lost and found. Contained in this nifty canvas pouch, the beans were clearly marketed at tourists visiting Massachusetts.

"Take home the taste of Olde Boston," read the bag. On the opposite side, above a simple recipe, it continued: "This recipe for truly authentic Boston baked beans will remind you of the wonderful time you enjoyed in Olde Boston. For a great meal just follow these easy directions."

How these beans crossed the Atlantic ocean only to wind up abandoned in the school library, I'm not sure. But when all the students departed for the summer and it became clear no one was going to claim them, I took them home.

A few weeks ago, while uncharacteristically trying to clean off the kitchen counter, Dave decided to make them. But when he looked at the recipe, he realized that it called for molasses, and that is not an easy thing to acquire in England. At least, not that we could find. He ordered some from Amazon, and we waited a few more days for that to arrive. 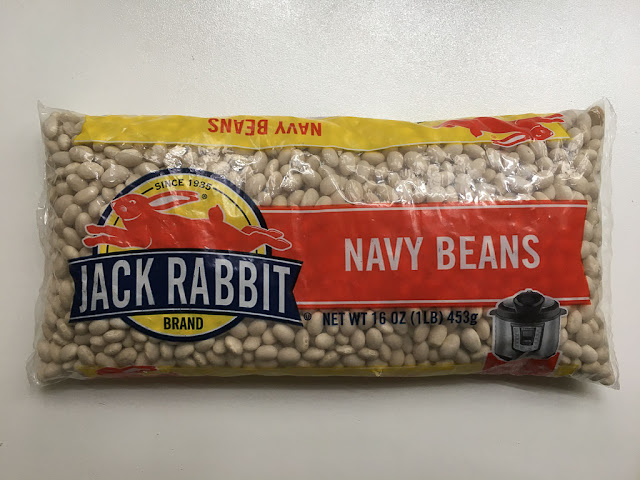 This is what was inside the canvas pouch -- a garden-variety grocery store bag of navy beans. Never mind that these cost something like $1, while enclosing them in canvas elevates the price to $8. Everybody knows tourists buy silly things at exorbitant prices.

Dave cooked up the beans, which took an astonishing six hours. (Not including soaking time!) As I told him, even if we didn't pay for the beans themselves, they were hardly free -- between the cost of the molasses and salt pork, and the power required to run the oven for that much time!

Still, they were yummy. I was most impressed. I haven't been to "Olde Boston" in about 10 years, but I guess this counts as a virtual trip. All courtesy of some careless student!

(By the way, although "Olde Boston" in this case refers to Boston, Mass., there is a Boston in Lincolnshire, England; the American city was named for it. I guess we could call it "Reallye Olde Boston." And I ate my Boston Baked Beans in the English style -- on toast!)
Posted by Steve Reed at 7:12 AM

Good job you included the rider at the end. Boston Massachusetts was, I believe, founded in 1629. In contrast, Boston in Lincolnshire was probably founded in 654 AD by the Saxon monk St Botolph. In fact the name Boston is a contraction of St Botolph's village - "tun" being an Old Norse term for farm or homestead. I doubt that St Botolph ever tasted Olde Boston baked beans.

Congratulations on the home made baked beans. I tried to make them once and they were awful.

When I used to live in a small village in Westchester, New York state, on the Long Island Sound, I used to find bits of small change on the sidewalk, as one does. One day I picked up a silver coin and it was a kroner from Iceland. Stuff turns up in the least likely places.

I much prefer to just open a can...voila! instant baked beans.

I find this whole post to be immensely funny. As I read in a book lately, "Free is often way overpriced". But then again, you were paying for the experience and I'm sure they were delicious beans!

That's my brother. Eating abandoned garbage found in a library lost and found.

Baked beans are awesome. In a remote northern school I made beans once a week for the school breakfast. It was a favorite of the kids.

I've never thought of making homemade baked beans. I have made homemade hummus. Same long process of beans soaking overnight, and then cooking for hours, and then the food processor... That's when I realized that canned garbanzos would be so much easier... Or just buying some locally made hummus.

O.K. my favorites are Bush's Baked Beans (Original recipe) from Texas, I think. They come in a can. Just heat and eat.

My husband tried to make homemade baked beans a few months back, and soaked and cooked them for HOURS, and they were still tough little kernels so kudos to Dave. I'm a fan of the canned variety myself. I never thought of eating them on toast. I shall have to try that one day.

I think the $8 was for the very nice canvas pouch.

While I love baked beans (and Catalyst's favorite is also mine), to me Boston Baked Beans are those little red candy coated peanuts. Yum!

I have to tell Paddington that beans on toast for breakfast is FABuLous. I had it for the first time 40 years ago, on my first trip the the UK, and thought it was hilarious that British people would eat baked beans in the morning. They are strictly an evening or afternoon BBQ food item in the USA. Then I tasted them and lordy, I was hooked.

I make beans on toast at least twice a week. But a few years ago I stopped putting them on buttered toast (weight watching) and serve them, instead, on an egg over easy. Baked beans mixed with runny yolk is exquisite.

What an enjoyable post this is. I really can't imagine anyone paying $8.00 for that little sack with the beans inside but, I've seen worse deals on the tourist shop shelves. I'm glad they tasted good after all that work. I haven't had really good baked beans in ages. My sister used to make the best baked beans but since she moved to Missouri, I don't get them from her any longer.

Like Ms Moon, I am highly amused! Actually that would be $2 worth of beans in the plastic bag here :)

It's been years, maybe even decades, since I made homemade baked beans, and I really need to get the crock out and make some. We've tried every jarred and canned brand there is, and nothing compares. Yes, it's a lot of time, but it's not really actual working time - you don't have to do much to them while they're in the oven for those six hours!

I'm so impressed at your "waste not" approach, Steve. And Dave :)

I grew up a few miles north of Boston and my grandmother used to make good old fashion Boston baked beans. They were the best. Nice story and thanks for sharing.