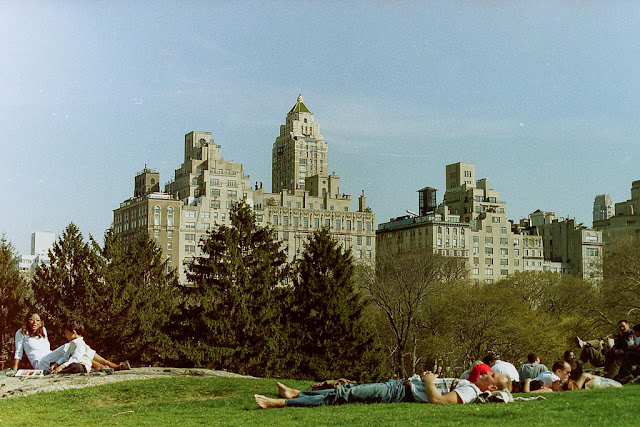 Here are some more old pictures from my negative archives.

First, some loungers in Central Park, New York, in 2005 or so. I remember this day -- I believe it was April, on probably one of the first warm, sunny, spring days of the year, and the whole city seemed to be outside. 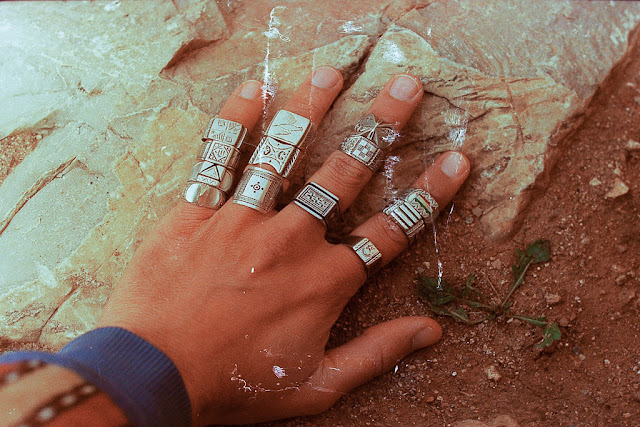 When I lived in Morocco from 1992-94, I collected silver Berber rings. This was my collection, modeled on my own hand. (The negative has some damage, as you can see.) I still have four of my rings, but I almost never wear them. I gave some away in Morocco and sold some others after I got back to the states. 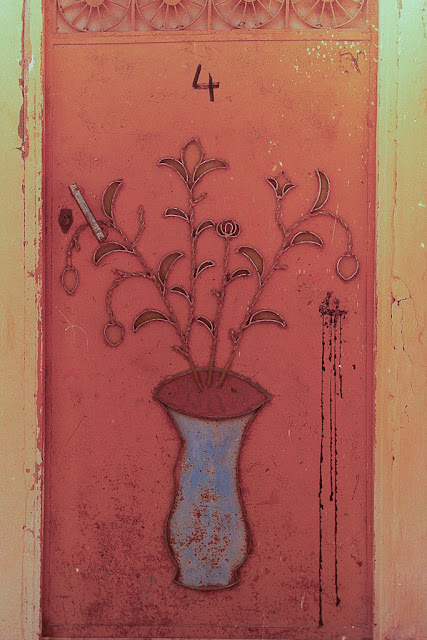 The area where I lived in Morocco was known for its whimsical metal doors. Here's a good example. 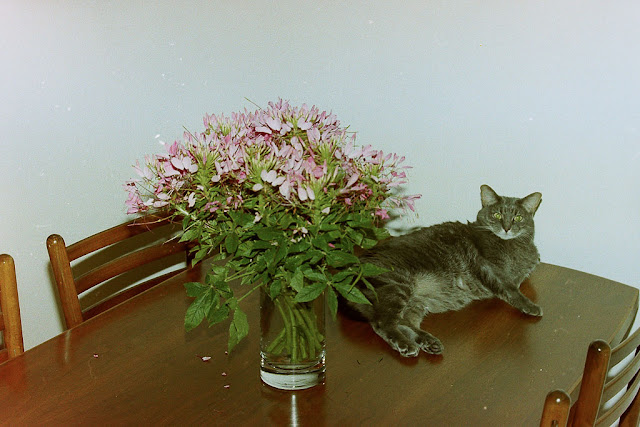 This is my cat, Armenia, in my apartment in New York. I remember buying those flowers because they were so peculiar -- they're called spider flowers or Cleome. 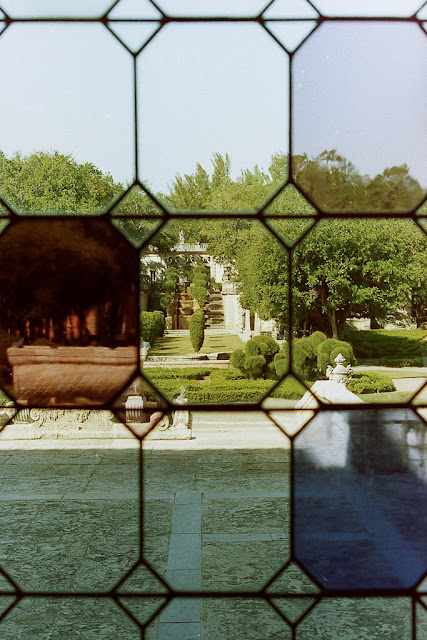 In 2005 or so I went to Miami with my friend Arne. We visited Vizcaya, the old James Deering estate on Biscayne Bay, which is open to the public. This is a shot of the garden through one of the windows. 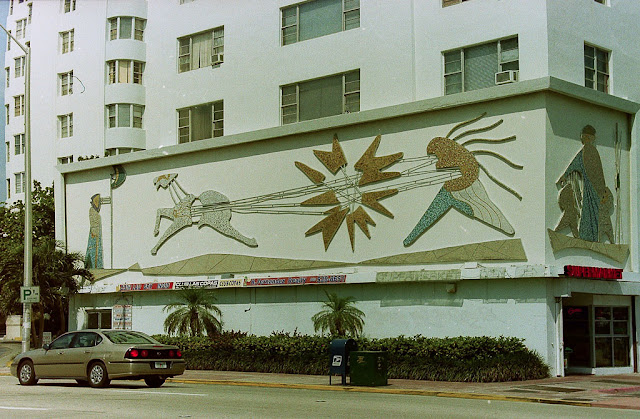 Another Miami Beach shot from the same trip. What a groovy mural! Depicting Apollo pulling the sun across the sky, the work by artist Jack Stewart was recently the subject of a preservation campaign. The building is gone now, but apparently the developers who tore it down saved and stored the mosaic pieces. 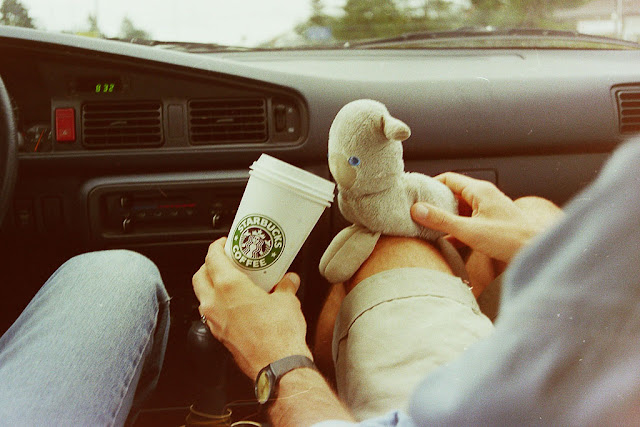 When my friend Sue and I went to visit our mutual friend Arthur in Portland, Oregon, in 1996, Starbucks was still something of a novelty (to us, anyway). Sue used to carry this stuffed sheep in her luggage whenever she traveled. His name was Fred. Apparently, like any good Oregonian, he needed some caffeine. 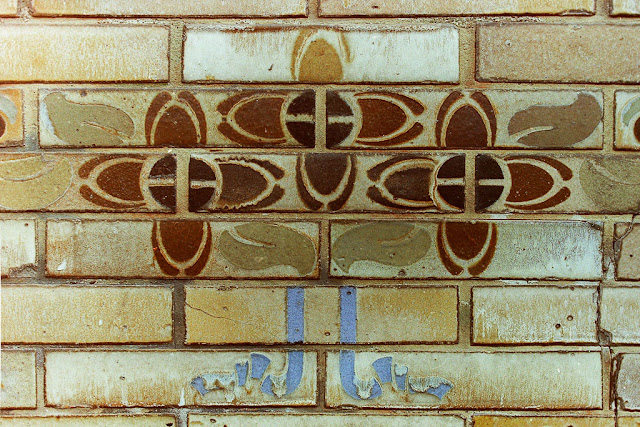 Some Art Nouveau tile on the wall of the Paris metro, in March 2000. 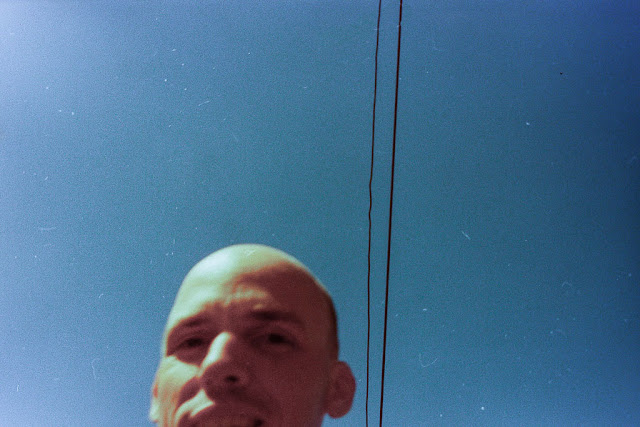 And finally, an apparently accidental self-portrait from atop the Empire State Building in 1997. Hello!
Posted by Steve Reed at 6:46 AM

Oh, I remember Armenia... and a wander through the Deering Gardens would be a wonderful experience, I'm sure.

My favourite is the window picture from Vizcaya. Well done for spotting that opportunity with the different panes. Very eye-catching. Armenia looks well-fed, very well-fed.

never in a million years would I have guessed that the mosaic is Apollo pulling the sun with his chariot.

There are surprises in old photo. They bring back memories and things we've completely forgotten.

I love these photos! You do have a treasure trove of delightful images to look back on. So wonderful. I have never seen Berber rings before. They are quite beautiful.

What a fun assortment of memories. I love those rings!

Yes, the rings are my favorite, too, though Armenia comes in at a very close second.

I love Fred, the rings (which reminds me to go look for the silver rings I brought back from Zambia), and your accidental selfie. Very cool!

Man, I love those rings! Mind you, I don't wear rings at all, but I still like the look of them on other people.

The mural is fantastic.

I didn't know you'd had a cat! An equal opportunity animal lover :)

Ji am now getting excited about new york

That mosaic of Apollo makes me think of the art and design of the late 1950s and early 1960s, when cars and appliances were made in the image of what we thought the future was going to look like. That mosaic is very much of its time, a time that I am fond of (even if the art doesn't really do it for me), so I am happy that it was saved. Who knows? In 200 years it might look a lot better.

An Acapulco Blue light up Princess phone is my "Space Age" object of desire.

Such a nice selection of photos. Thank you for the wander.