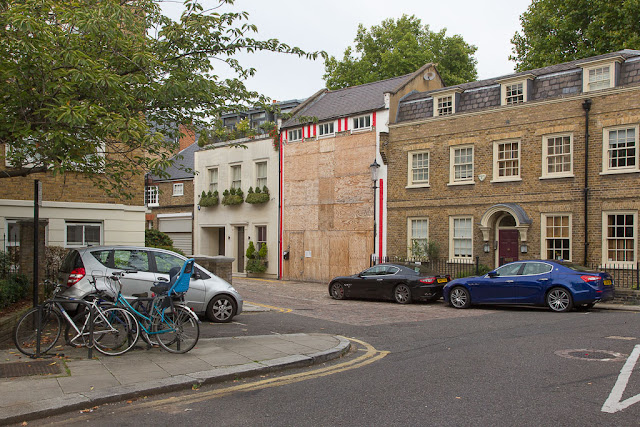 I've been meaning to photograph this house for the last few years. It's on a tiny side street and it's not the kind of place you'd happen to wander past -- you really need to try to go there. So I never made it until last weekend, and unfortunately, I missed seeing the house in its heyday.

It's covered in plywood now, and not very photogenic, but before the plywood went up its owner -- who has the fantastic name Zipporah Lisle-Mainwaring -- painted it with bright white and red candy stripes. That was in March 2015, and it led to a very public legal skirmish with her neighbors. They accused her of painting the house out of spite, because they fought her plans to demolish the structure and build a new home.

Lisle-Mainwaring denied that was her motive, and recently won a court battle, allowing her to keep the stripes. Unfortunately they've since been obscured by the plywood, which appears to have gone up in anticipation of some greater renovation. 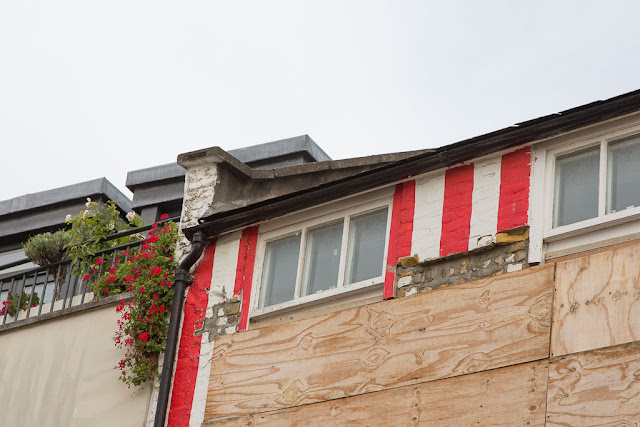 The stripes are only visible at the top of the exterior wall, where they match beautifully with the next-door neighbor's trailing geraniums. Personally, I thought it was a pretty cool paint job.

I'm watching Hurricane Irma with dread. My mom and brother live very close to its projected path, up the Atlantic coast of Florida. Mom says she will evacuate if necessary, but for now they can only watch and wait. The storm is still far enough away that a wobble in any direction could make a big difference.

For a while it looked like Irma might follow the path of Donna, which went right up the center of the state in 1960 and is a legendary storm in peninsular Florida. My great grandmother, who lived in the small Central Florida town of Avon Park, said afterwards, "I wouldn't name a dog Donna."

Meanwhile, things are pretty calm here. Dave came to my desk a couple of nights ago, as he was leaving work, to ask what he should buy for dinner. Ever thrifty, I pointed out that we still had leftover cheese slices in the fridge from the Sally lunch a few weeks ago. "Let's have cheese sandwiches," I said. "Or Welsh rarebit! We could use up the soy sauce!"

He mocked that suggestion, and it was only after he left that I remembered Welsh rarebit uses Worcestershire sauce, not soy sauce. Oh well. I knew it was something brown.

And then I got home and, lo and behold, he made grilled cheese sandwiches and tomato soup! Thriftiness wins! (And by the way, that meal is hard to beat -- which is good, because we have more leftover cheese and now leftover soup as well!)
Posted by Steve Reed at 6:41 AM