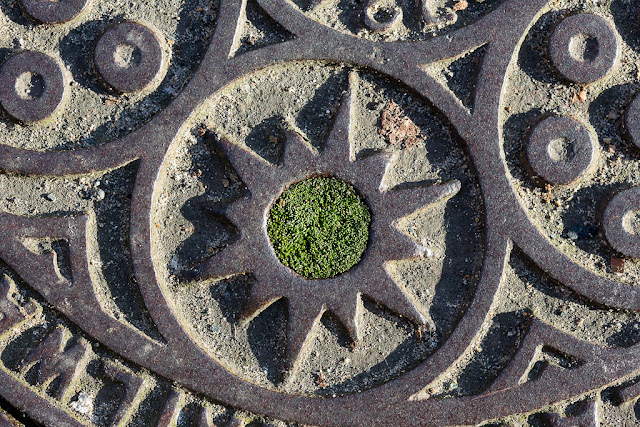 A couple of days ago, I mentioned playing my iTunes on the "shuffle" setting, and several of my commenters said they prefer to play songs alphabetically because they get a less repetitive assortment of music that way. I tried it, and by golly, it is much better. I've always disliked the tendency of "shuffle" to go back to the same songs or albums over and over. So thanks for that tip!

I retrieved our bird feeder lid. It's not worth explaining how, except to say that it involved a long pole and a hole in our fence. I didn't even need to disturb the neighbor again, though I suppose I should go introduce myself to her more fully and at least get her name!

And finally, we got a response from the book store about the book switcheroo. They insist, after investigating, that it really was an honest mistake and not some kind of homophobic message. They're sending us the correct book for free, as well as some vouchers toward future purchases. Frankly, I don't believe them. My co-workers seem more inclined to do so, but I think in the same way that people of color often recognize subtle forms of racism that I don't see, I am especially sensitized to homophobia. At any rate, there's not much more we can do, and if it was intentional on the part of a renegade holy-rolling employee, it will happen again. They can't say we didn't warn them.

I wonder if they can identify who filled your order, and watch that employee's track record in future ... it just seems too much of a coincidence to be an accident.

I love that photo, and yesterday's as well, although I forgot to say so.

My thoughts are the same as yours re the book thing

That was not an accidental book substitution, but you can't blame the distributor for covering his ass. The creep who took it upon himself to censor your book choice probably can't be fired, so I hope the offer of free replacement plus vouchers teaches the proselyte that the upshot of his deed is that you now have extra money to buy even more copies of This is a Book for Parents of Gay Kids.

it may not happen again even if it was intentional, which I believe it was. just too much of a coincidence that that was the book that was sent 'by mistake'. I mean, what are the odds? if it is a new employee and they want/need their job, they may not risk it again. and a long pole through a hole in the fence? that made me laugh. just go over to the neighbor and ask for it!

People are just weird. That's all there is to it. And when religion enters the picture, they get weirder.
I'm sure whoever sent that book by "mistake" is not a happy person. Possibly even a closeted gay person who is attempting, with the help of religion, to keep that door so firmly closed that even they can't see the light.
Think of it as a cry for help.
Okay. That probably doesn't work.

Sneaky. Downright sneaky and then lie about it. Yes there are many comments that people pick up that are meant to be hurtful. You called them on it.

I'm glad the alphabetical tip worked - at least that's better news than the resolution to what I consider to be an intentional slur. And you're right about the targeted population noticing such things when us plain old vanilla folks miss them. I've tried to be more sensitive myself, but it's hard!

I'm glad you tried the alphabetical play list. It's a nice way to remember the music we have. About that book mistake... I don't believe it was an unintentional error, but it was good of the company to acknowledge it and try to make amends. We do live in interesting times. Lovely photo, as always!

Like all your other readers, I agree that it wasn't an accident. An accident might have sent you a cookbook or a novel or even a book for parents of kids allergic to peanuts, but not a manifesto on someone's naïve idea of virtue. At least you've pointed it out to them so hopefully they will keep an eye on the employee to make sure something similar doesn't happen again.

I agree that book switcheroo was too much of a coincidence. I'm glad they are at least making some amends and it's good that you called them out on it so they can watch if it happens again.

It cracked me up that you retrieved your bird feeder part with such ingenuity and also that you are thinking you might want to get your neighbors name now that you've stuck a pole through a hole in the fence. That makes me smile.

And, now I'm going to try playing my playlist alphabetically...that sounds like a fine idea.

Well, at least you have two problems solved. Three if you considered your music selection a problem. I, too, like the photo.

I'm pretty sure you're right about the book switch up. But they're going to go with the party line for all they're worth. Thanks for tip on the music shuffle.