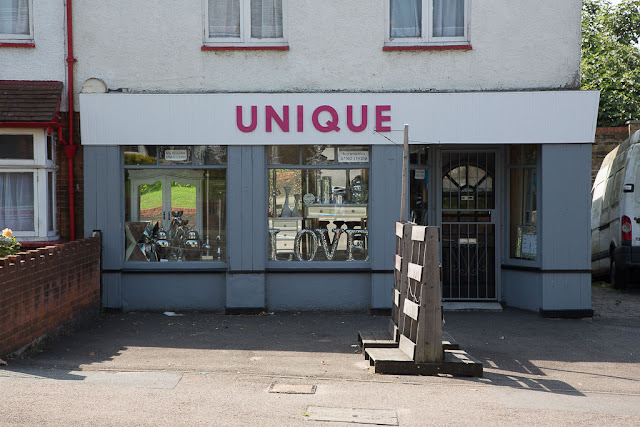 I went to get some bird seed at Homebase a couple of nights ago. That store has a rodent problem! Every large bag of seed has been either split or gnawed open, and the shelves are thick with loose grains. When I rounded the corner, a furry critter shot under the shelving unit. I understand the store can't put out poison -- it being bird seed and all -- but why isn't someone vacuuming up all that loose seed and patching those leaky bags? I didn't see any evidence that the problem was being addressed.

Homebase is a strange place -- huge and cavernous, but on any given weekday evening there only seem to be about four employees.

Anyway, I was going to buy a 12.5-kilo bag but I quickly realized I wouldn't be able to carry it home (especially with that hole in the side). So I went for one of the smaller bags, even though it was almost the same price. At least it was sealed.

Abercrombie the Finch has been on our finch feeder every morning this week. Apparently goldfinches often migrate to southern Europe for the winter. I wonder if he's fueling up?

Last night Dave had to work, so I spent the evening alone. I finished the Sedaris diaries and had the last of the tomato soup. I made a cheese sandwich but I couldn't be bothered to grill it. Let me just say, they're much better grilled.

As I sat on the couch with my glass of wine, the dog snoozing beside me, I remembered a time in 1988 or so, right after my college roommate moved out of our shared apartment at a complex called Square Plaza in Tampa. It was the first time I'd had an apartment all to myself, and I was thrilled. I remember pouring myself a glass of white wine, putting Joni Mitchell's "The Hissing of Summer Lawns" on the stereo, and relaxing in my very own living room, feeling like a real adult.

That memory made me realize I hadn't listened to an album all the way through in a long, long time. My iTunes are constantly on shuffle nowadays. So for nostalgia's sake, I turned off the shuffle function and played "The Hissing of Summer Lawns" straight through, white wine in hand. It was nice.

Now it's raining outside, a soft whispery patter falling in the gray light. Olga's not going to want to go on her walk.

Irma is still full of uncertainty, though most of the projections show it hitting peninsular Florida in one way or another. Do you know that in the 30 years I lived on Florida's west coast, I never went through a hurricane? We had a few close calls, but none that hit us directly, and during the one that affected Tampa the most -- Elena in 1985 -- I was on vacation in Daytona Beach, on the other side of the state. (I was also gone for Andrew in 1992; I had already moved to Morocco.) Just dumb luck, I guess, because since then there have been any number of storms pounding away at my old home turf. Looks like Irma may be another.

(Photo: A Unique shop in Upminster.)
Posted by Steve Reed at 6:57 AM