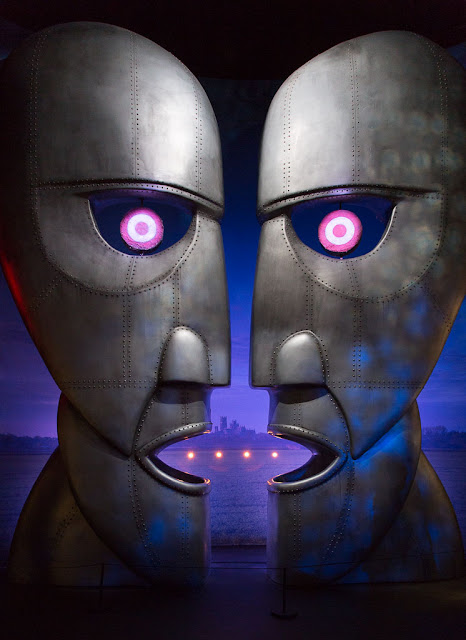 I went to the Pink Floyd exhibit at the Victoria & Albert Museum yesterday morning. Those of you who are Floyd fans will recognize the two heads above from the cover of the 1994 album "The Division Bell." I had a friend in the Peace Corps who had a t-shirt with those heads on it. Little did I know I'd be seeing them in a museum someday!

The exhibit was fascinating, especially the first few galleries covering the band's early years. I don't know any Pink Floyd before "Dark Side of the Moon," and there were several earlier albums. I loved the psychedelic light show projected on the ceiling of one gallery and all the groovy '60s promotional posters and graphics.

I also liked learning about the creation of Pink Floyd's album covers. It's fair to say I know the album covers even better than I know the music, iconic and omnipresent as they were in the '70s and '80s. Hearing how they shot the cover photo for "Wish You Were Here," for example, or how hard it was for designer Storm Thorgerson to put more than 100 beds on a California beach for "A Momentary Lapse of Reason," or how the band managed to float an inflatable pig above Battersea Power Station for "Animals." (It broke loose and drifted to a farmer's field in Kent.)

Of course it wasn't the first time I'd seen or heard about that pig, but it struck me as incredible that they actually floated it. Nowadays that album cover would be created in Photoshop. But as Thorgerson pointed out, there's value in actually doing a thing -- the doing, the reality, is part of the art. Otherwise it's just an idea. 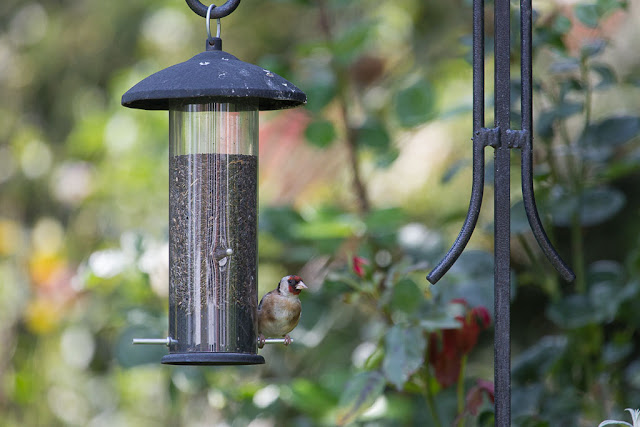 Meanwhile, back home, Dave was watching a goldfinch on our finch feeder. We first saw him on Saturday, though I'd caught a glimpse of one -- possibly the same one -- about a week earlier. Dave named him Abercrombie the Finch, which I consider a stroke of genius. I'm just glad that feeder is getting some traffic. Goldfinches in our garden have been few and far between.

Later in the afternoon, Olga was gazing at me longingly, so I took her to Fortune Green and the cemetery. There were several women gathered at a bench in the back of the cemetery, and their yappy dogs raced toward us yapping, so Olga and I beat a hasty retreat and headed home. It's a good thing, too, because the wind blew up and it began spitting rain. Later, while lying on the couch, I heard an ice cream truck pass on the blustery high street playing "O Sole Mio," as if heralding the end of summer.
Posted by Steve Reed at 6:11 AM