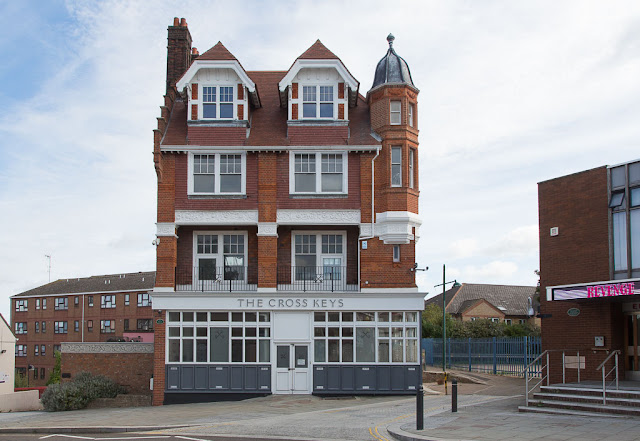 Let me say right off the bat that I feel insensitive blogging about anything other than Irma, given that my family and friends are being walloped. The storm is happening now, but it seems like it's not as bad as first feared. So consider today's post a reprieve from hurricane news.

I walked another segment of the London Outer Orbital Path (LOOP) yesterday. I started in Erith, on the opposite bank of the Thames from where I walked a few weeks ago, and wound past the pub above and through the marshes along the rivers Darent and Cray to Bexley. 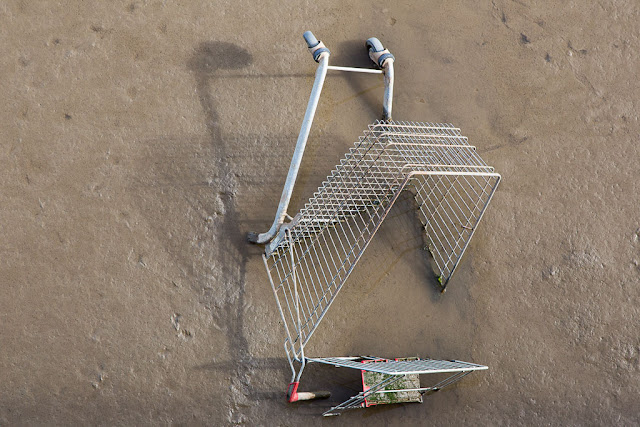 The bit along the Thames was surprisingly industrial. There were a few lost shopping carts... 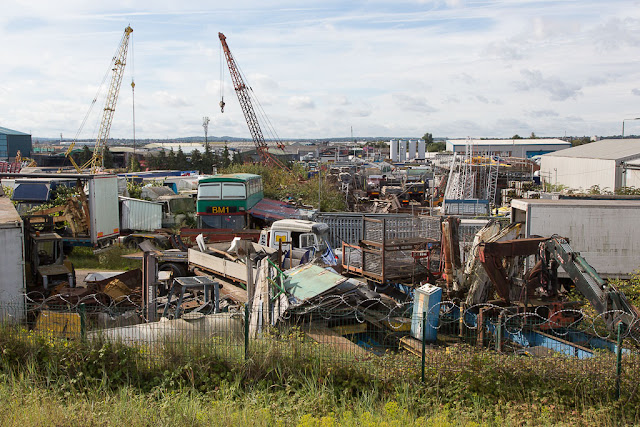 ...and some large scrap yards and recycling and waste centers alongside the path. But all I had to do was turn around, so that I was facing the Thames, to see... 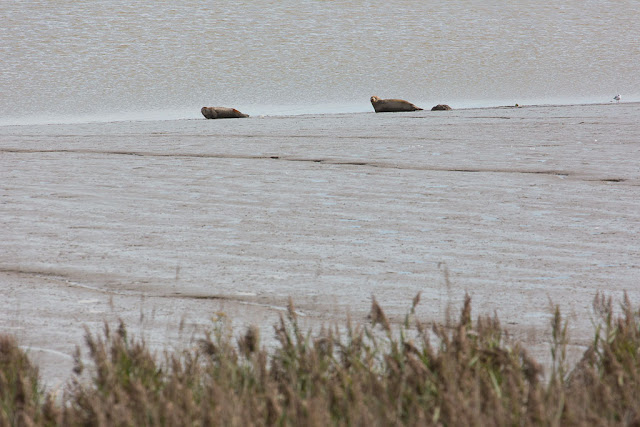 ...seals! Yes, those really are seals. Two of them. I would have missed them except another man on the path, seeing my camera -- and probably wondering why I was photographing the scrap yard -- pointed them out to me. Thank goodness! 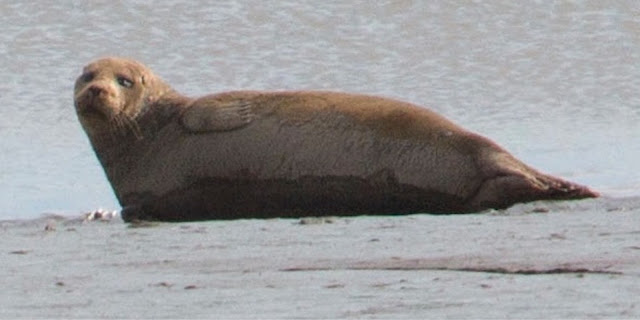 Here's a super-enlargement of the above photo, so you can see his (or her?) flippers and whiskers. Apparently seals are not uncommon along the lower Thames, where they arrive from the North Sea. 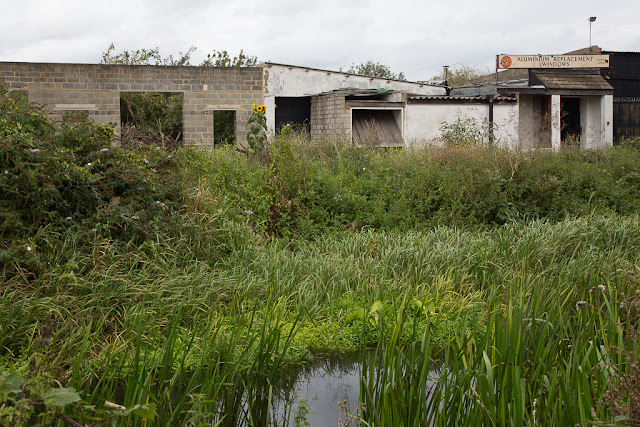 The River Darent was largely an open, muddy expanse. But the River Cray, once I'd moved away from the Thames, became much more overgrown with vegetation and reeds. It flowed through a combination of residential and industrial areas. (Do you see that big sunflower in the picture above? Very impressive!) 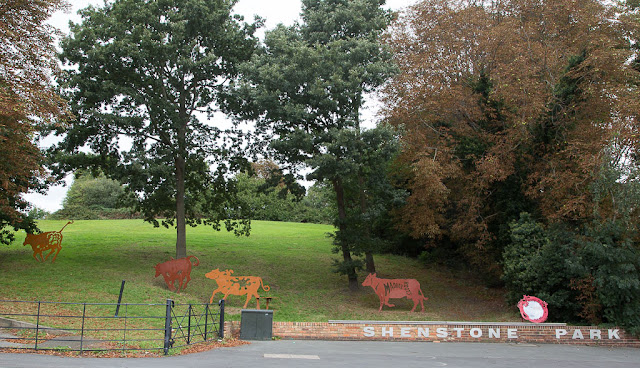 In Crayford, I came across these metal cows, frolicking in a pasture at Shenstone Park. The cows commemorate a herd that lived here beginning in the 1840s. Their manure was used to help fix dyes used in silk printing -- an industry that apparently put Crayford on the map. 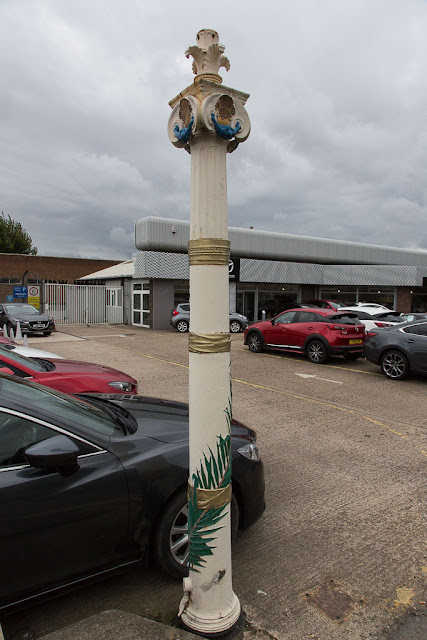 And farther along the path, I passed two ornate cast-iron lamp posts. They're the last surviving remnants of an old theater, and date from the 1880s. They now stand guard over an automotive garage.

From there, I walked through woods and fields to get to Bexley. Along the way I had a little diversion: I looked to the side of the path at one point and saw a small briefcase, or a big purse, about ten feet up a hill toward the edge of a very busy road. I could tell immediately that it was probably stolen and discarded there. I debated what to do, and decided to climb up to get it.

I was right. It contained car keys, passports and other documents. The papers were a bit moldy, so it had probably been there a while, but the passports were in a plastic baggie and seemed fine. I touched it as little as possible and didn't look at the contents beyond pulling the bag open for a quick glance. I decided to take it to Bexley and turn it in to the police.

Well, you'd think finding a police station in Bexley would be easy, but here's a fun fact: If you put "Bexley Police Station" into the maps app on an iPhone -- even while standing in Bexley, London -- it directs you to the police in Bexley, Ohio! Not helpful!

I asked a couple on the street if Bexley had a police station, and alas, they said no -- they directed me instead to Bexleyheath, a 15-minute bus ride away. So I went there and turned in the bag -- the police seemed appreciative, though one officer was put off when a spider climbed out of it. Then I took another bus back to Bexley and had a cafe lunch before catching the train for home.

I can tell these LOOP walks are going to provide no end of adventure!
Posted by Steve Reed at 6:12 AM

A fascinating and varied walk on which you encountered some unexpected things. I wonder what Olga would have made of the seal. Good on you for doing the right thing with that bag.

not very brave of that police officer to be put off by a spider.

I really enjoyed this post and the other one about the LOOP. I hope you will continue. Please do!

I have a thing for following trails. Many years ago, I cycled from London, well, Kingston, to Oxford along the river, years before this was made into a proper cycle trail with signs etc. and it was a wonderful adventure.

I wonder how many people decide to walk the whole loop as you are doing. When you wander the trails here as much as I do , you do find lost or stolen items.

It's good to know that the Thames is clean enough for seals. Nice post. Thankyou
Briony
x

I had no idea that there were seals in the Thames! What a treat that is to see those beauties. Great story about that purse. Really good of you to fetch it and take a bus to turn it in. I am so glad you take these walks. I always like a good vicarious adventure!

I love your spirit of adventure! Once again, I did a search to view a map of exactly where you were. It really helps me to visualize the area. I can't believe you saw seals. I certainly wouldn't have expected that. I think you are going to be seeing some interesting things on these walks.

Cow manure to fix dyes in the silk industry? ... who knew??!! And it was so kind of you to go to considerable trouble to turn in that purse. Someone will be very thankful.

You aren't the only one looking forward to more of your walking loops! And speaking for myself, it's exciting to talk a different area - so much more to capture with a camera.

Of course, afterward there is also the "talk" aspect :)

That was a fascinating walk.

We have one, just old elderly seal on our neaby beach! Glad your family are safe

Well I love everything about this post - seals, sunflowers, metal cows, iPhone craziness and you riding the bus to do a good deed. Fun!

I can see you will have a whole bunch of us tagging along on your Loop walks. The area is such a contrast to the Heath walks with Olga.
Seals, stolen goods, sunflowers and scrapyards.
What next?