Countryfile, and My Sedaris Experience 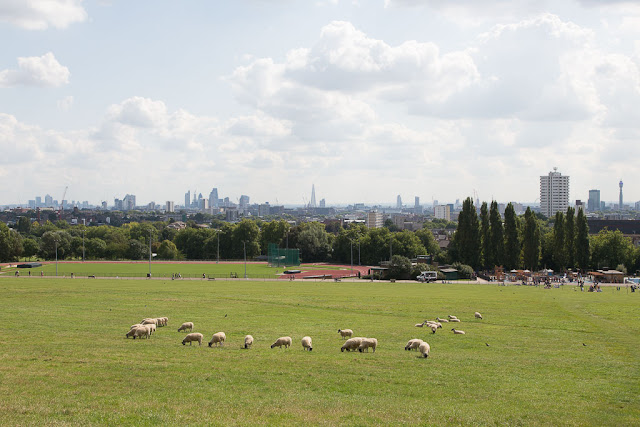 Yesterday Olga and I were on Hampstead Heath and we came across, of all things, a flock of sheep.

This is not normal. Not for Hampstead Heath, anyway.

The sheep were penned in a wide pasture on Parliament Hill and it turns out they were brought in for the filming of the BBC show "Countryfile." Specifically, according to Hampstead Heath's Facebook page (which I only just now began following!) for a segment called "One Man and His Dog." 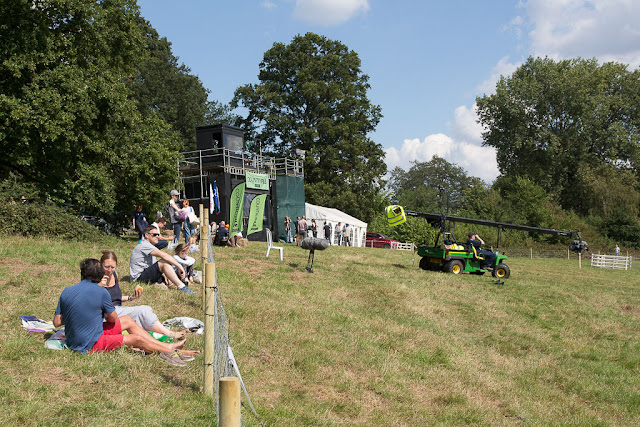 I've never watched "Countryfile." As best I can tell, it's a show about farming -- or even more broadly, living in the country. "One Man and His Dog," I believe, has something to do with sheepdogs. A competition, maybe.

Anyway, there were handfuls of people lining the fence to watch the action, and there were clusters of official-looking TV presenter-types standing up near a tent flying "Countryfile" banners. But Olga and I were there during a lull, and we didn't hang around to see what might happen. 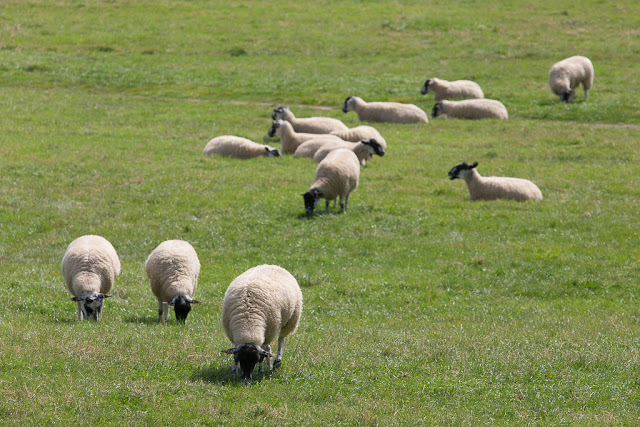 The sheep seemed placid enough, enjoying their temporary accommodations. I guess they were fueling up for being chased and herded.

(Incidentally, sheep used to be commonplace on the Heath, a rest stop for them on the way to market in the city. They were last seen there in 1956, according to the aforementioned Facebook page.)

When this episode of "Countryfile" comes out I'll see if I can catch it, just to satisfy my curiosity. 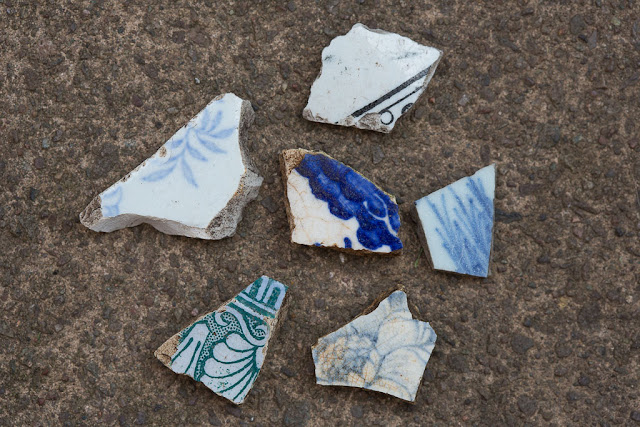 Meanwhile, Olga and I had a good walk. I found some more interesting old pottery chips lying here and there on the paths of the Heath.

Then, last night, Dave and I went to see David Sedaris at Royal Festival Hall. (Finally, my curse of being unable -- or too disorganized -- to see him live has been broken!) First we had dinner at the Skylon restaurant, which is a nice space with good food, but the service seemed a bit chaotic. We chose the three-course dinner, and even though we were there an hour and a half and they knew we had theater tickets, dessert never came and we had to skip it. I nearly had to stand up and chase the waiter to get our bill. (Ultimately, we only paid for two courses.)

Sedaris read two essays, including one from The New Yorker about his mother that I'd already read -- but that's OK, because it's really good. He also read excerpts from his diaries, a portion of which were just published (I'm reading them now, as I mentioned the other day). One entry was as recent as four days ago. I wouldn't say he's a great reader -- he hastens a bit and swallows some words, but of course he's hilarious. He wore a very peculiar suit with pants made from pieces of multiple (nine, I think?) pairs of trousers and a jacket made from two halves of other jackets. It's hard to describe. You'd have to see it.

Then he took questions from the audience. People asked about Trump -- Sedaris is not impressed and said Trump had defied all his expectations merely by getting elected. Sedaris is annoyed about Brexit because, as a resident of England, he wanted a British passport with the freedom to travel easily within the EU. He said he has a British friend who voted for Brexit, and he asked him why, but when the friend offered his explanation it was incomprehensible to him.

At the end of the evening Sedaris signed books in the lobby, but since I already have his book Dave and I didn't stay. I didn't feel the need to meet him. In fact, I think he'd make me a bit nervous, like a totally unpredictable kindergartner who might just say anything. I think I appreciate him best at a slight distance!
Posted by Steve Reed at 7:29 AM

If you had been dressed like a farmer with a shepherd's crook you could have entered Olga for the sheepdog trials. She might have had to wear a border collie costume. Sheepdog trials are about man and dog controlling the sheep together - leading them round or through obstacles within a certain time limit.

Shirley and I habitually watch "Countryfile" on a Sunday evening. Over the years it has given plenty of interesting or quirky insights into British country life and the annual Country Life calendar is always a wonderful homage to countryside photography.

Well, as you might imagine, I think the most important part of this post is the sheep! I've watched a border collie herding ducks (for a demonstration) - hilarious AND impressive!

Seriously- he WORE that? But why?
Oh well. He's David Sedaris.

Sheep on the Heath....that's what I love about big cities. You never know what you are going to run into. I can't get a picture in my mind of the outfit that Sedaris wore. I think I'd have to see it in person.

drooling over those fine looking sheep, I want to rub their woolly backs and kiss their ears. They are gorgeous.

Sounds like you were seeing everything at a distance, Steve. I do like your pottery shards, though, and the sheep pictures are marvelous.

The New Yorker piece is quite moving, isn't it - I know nothing about him but I CAN picture his outfit because I read a number of refashioning blogs and am familiar with the process of creating such things. He might even have paid a lot for those clothes! Glad you got to see him finally.

Do you think Olga would have been able to cope with seeing sheepdogs chasing sheep without needing to join in??