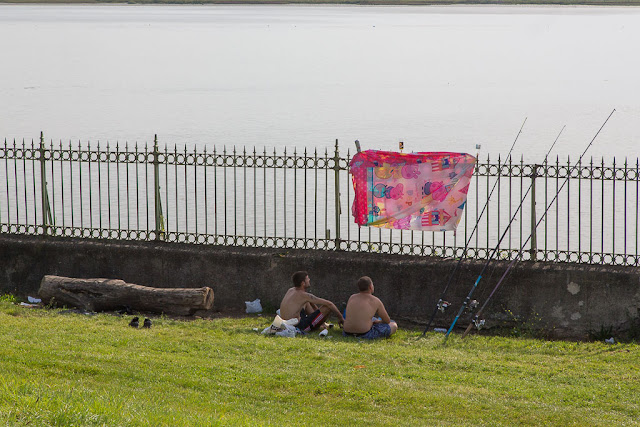 We had some excitement yesterday regarding Hurricane Irma and my family in Jacksonville, Florida. My brother sent me an e-mail saying he couldn't reach my mom, and he and his wife and kids were about to evacuate to South Carolina. So I got on the horn to Mom and her retirement center to find out what the heck was going on.

We eventually got it all sorted out -- Mom had evacuation plans of her own, through her retirement community. My brother and I just wanted to be sure she wasn't staying put, because she lives in a flood zone near a major waterway (albeit on the second floor).

Now, as it's turned out, the storm seems projected to move farther west, over Tampa. My brother wound up not evacuating after all. I'm still not sure whether Mom went as planned. It's hard to stay on top of these things from London, where the skies are calm and the birds are on their feeders in the back garden, oblivious to meteorological drama.

Did you see that Graydon Carter is stepping down after 25 years as editor of Vanity Fair? When I first caught a glimpse of the story yesterday I only saw his name in a headline, and thought he'd died. That would be a hideous injustice, for the man who first dubbed Donald Trump a "short-fingered vulgarian" to die during Trump's presidency! I'm glad to see he's still with us. (Carter, that is, not Trump.)

During the '90s I was an eager consumer of Vanity Fair. I loved Nan Darien, the fictional columnist and social x-ray who commented wryly on the activities of the upper crust. VF's investigative articles were riveting, and the magazine taught me a lot about pop culture. But I began losing interest as I aged and failed to recognize progressively newer, younger stars in its pages. I realized I could never keep track of the next Bright Young Thing, and the dozens of Bright Young Things coming off the assembly line behind. I kind of gave up!

(Photo: A couple of guys fishing in the Thames in Purfleet. I like how they rigged a Peppa Pig bedsheet to give them some shade!)
Posted by Steve Reed at 7:45 AM