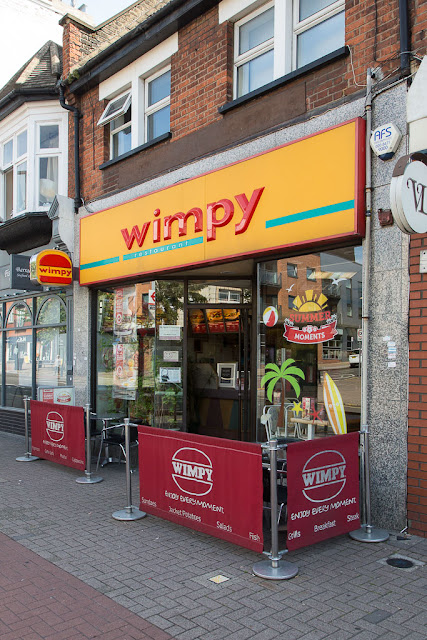 Someone asked me several months ago if there were still Wimpy burger restaurants in the United Kingdom. The answer is yes, but not a lot of them. Here's one I came across in Upminster last weekend -- the first I can recall seeing in a long, long time.

Apparently Wimpy, which in 1970 had more than 1,000 outlets in 23 countries, is down to about 80 restaurants in the UK -- from more than 500 at its peak. None of them are in central London, which is why I never see them. They tend to circle the city in more suburban locations, and they dot the landscape elsewhere in the country.

I have to confess, I still haven't eaten in one.

According to Wikipedia, Wimpy restaurants were in fact named for the Wimpy character in Popeye, way back in 1930s Chicago. Apparently the man who launched Wimpy in the United States eventually granted a license to another guy in the UK, leading to Wimpy's establishment here in 1954. (The Wimpy web site elides those earlier American roots, for some reason.)

Wimpy grew into the UK's principal burger chain before gradually being eclipsed in the '70s by McDonald's and Burger King. (In fact, many Wimpy restaurants actually became Burger Kings.) In the interim it spread to South Africa, and is now owned and franchised by a South African corporation.

A writer named Ashley Clark, in Vice, lamented the demise of Wimpy in an informative 2014 article.

"There are obviously infinitely worse things to be getting upset about than the decreasing influence of a fast food chain, but Wimpy’s broader UK predicament is nevertheless a little saddening," Clark wrote. "Its downturn is due to a combination of vigorous and ubiquitous competition, a terrible economic climate, a lust for instant gratification and the brand’s enduring lack of willingness to really assert itself in the public eye."

I almost never eat fast food, but I'm thinking one of these days I should be adventurous and give Wimpy a try. Apparently they serve a mean spicy bean burger. Our closest branch appears to be in Wembley, which is a bit of a schlep, but if I make it out that way I'll let you know.
Posted by Steve Reed at 8:09 AM

I don't know. A bean burger doesn't sound like something that Wimpy would've eaten -- or did he?

Wimpy burgers used to be very nice - far nicer than McDonalds or Burger King. You could see the breadcakes being toasted and watch the burgers being freshly griddled. I haven't had a Wimpy in many years.

Thank you for investigating my inquiry. When I was a teenager in London there was a Wimpy's within walking distance of the flat we occupied and I ate there and always wondered what happened to them. I enjoyed their food and the atmosphere inside because we had no such places where I lived at the time and you could watch your food being made. It wasn't left out under a heat lamp either.

When I was in Europe (thought not Great Britain) in '72, there seemed to be a lot of Wimpy's. Maybe mostly in Germany? I can't remember. We never did eat there though. I think you should go there, just for the historical significance.

There used to be a Wimpy's in Bloomsbury, c. 1982. My sister went in to check out the place (it seemed so hilariously "English) and one of her most prized possessions is a photograph of a sign that was hanging inside:
Let's be happy
Let's all smile
Let's eat Wimpy's
All the while.

If you ever make it out there to try, you will have to give us a review.

I well remember the first Wimpy in Brighton but I'm not sure if it was a take out, I think you had to eat in.

Yes, you NEED to eat there!! (or maybe it's that we need you to eat there haha) Do report back :)

That is a miniscule patio area in that photo!

I never heard of Wimpy's. I hope you give it a try and share your experience here. Spicy bean burger sounds yummy!

I well remember Wimpy from the Popeye comic strips but I don't think I've ever eaten at one of his restaurants. I DID have lunch today from Jimmy John's though.

Well, just the name would attract me. I have never heard of them.

There was a Wimpy in my home town in Germany, we went there after school to share a Knickerbocker Glory.