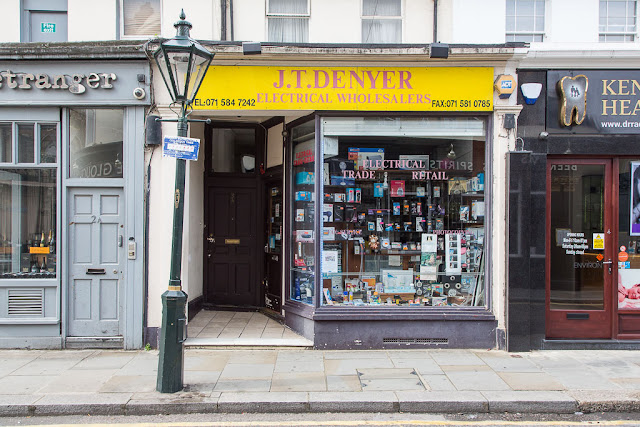 I happened to walk past this electrical wholesaler's shop in Kensington on Sunday morning. As I glanced in the window, I saw this: 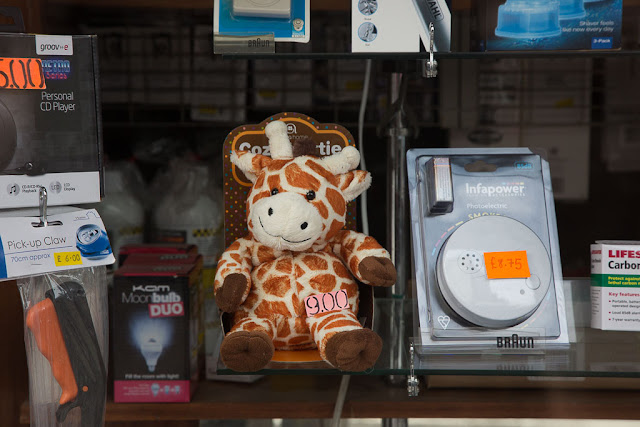 I thought, "Why is there a stuffed cow in the shop window at an electrical wholesaler?"

Upon doing further research I've realized that a) it's a giraffe, not a cow, and b) it's called a "Cozy Hottie." It includes a scented wheat-grain pouch in its belly that can be removed, microwaved and reinserted, making the giraffe warm and cuddly. I still don't really understand why it's in the window of an electrical wholesaler -- but why not?

On a completely different note, I've been thinking lately of a time in my distant past when I completely embarrassed myself. I don't know why this memory has come to me recently. It involves a class I took in college called "expository writing," where we would discuss and debate ideas before writing papers about them.

I sat in class with a girl named Penny, who wore thrift store skirts and had a thick, blond braid that she used to wrap around the top of her head. She looked like a Norwegian hippie milkmaid. Another kid in the class was an evangelical Christian who used to advance a lot of über-conservative social ideas about the evils of gays and abortion.

Penny and I both took umbrage with this kid.

One day, during a heated debate about something or other -- I don't quite remember the context -- the Christian kid was talking about taking moral direction from God. He argued that secular humanists didn't have any moral foundation.

"Of course they do!" I argued.

The teacher, Dr. C, asked where that foundation came from.

"The God of humanism!" I said.

The entire class just stopped. The Christian kid, looking down at his desk, shook his head and smiled tightly. Dr. C looked at me blankly and said, "There is no God of humanism."

And that's how I learned what "secular humanist" meant, because before that moment I clearly had absolutely no idea.

I felt stupid and Penny quietly said some consoling words, and the class moved on. But it annoyed me that I tripped up, because I was right about my greater point -- that humanists can be moral beings.

Too bad I didn't have a warm, scented giraffe to make me feel better!
Posted by Steve Reed at 6:50 AM