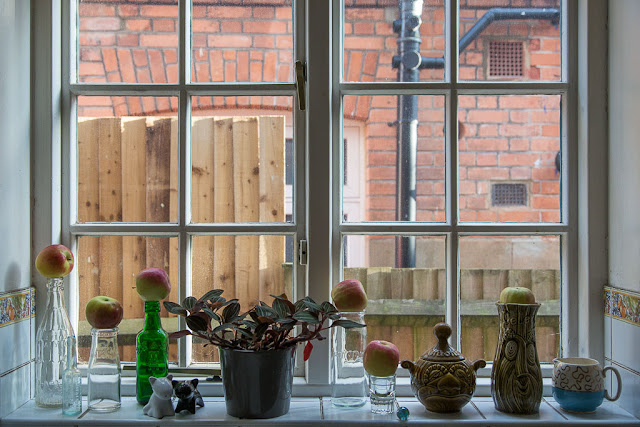 This is our kitchen windowsill at the moment. Do you like Dave's method of storing apples? Kind of sculptural, right?

Yesterday was a bizarre day. First there was the dud bomb on the tube train, which fortunately didn't do more damage. It rattled everyone, and a witness was quoted in the newspaper despairing that "nowhere is safe." But I think rather than feeling like we're all in danger, we should consider that everywhere is mostly safe. Yes, there is a modicum of risk, but walking down the street or riding on the tube, the odds are still overwhelmingly in our favor. I don't want terrorists to get more mileage out of this kind of activity than they deserve. (And yes, Dave and I rode the tube home.)

Then, to add to the bizarreness, we learned that a chilled giant iguana was found earlier this week languishing by the side of a highway in Scotland. Fortunately, he was rescued.

Dave and I had planned to go to the annual school trustees' reception last night, which was being held at Christie's auction house in Westminster. But I'd been developing a sore throat all afternoon, and Dave didn't really want to go, either, and the dog was so happy to see us when we got home -- so we just decided to stay put. I'm glad I did because my throat got much worse. I think it's just a cold, but I'm sucking on Strepsils like there's no tomorrow.

I learned a new expression this week. A couple of ninth-graders who came to my desk for one reason or another got excited about something -- I can't remember what -- and one said, "That's so clutch!"

"Clutch?" I asked him. And yes, it turns out, this is a thing that people say now. People his age, anyway. According to the slang dictionary, one of its definitions is "conveniently awesome."

As the kids left the library, I heard them laughing about my ignorance of the teenage vernacular.

"Generation gap," one of them said. 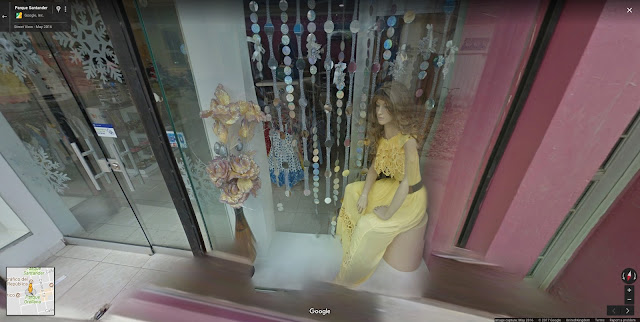 And since this is already such a strange mishmash of a blog post, let me throw in this photo, which I took from Google Street View. I happened to be checking out the street scenes in a little town on the Colombia-Peru-Brazil border called Leticia -- this was after reading a news story about native tribes in that area being endangered by gold mining. Street View happened to take me past this shop window, which I found pretty funny -- the gaudy flower arrangement, the assertively positioned mannequin. (If you'd also like to visit Leticia virtually, the shop is here. There's a second mannequin, also well worth a glance.)