A Flute, a Fox and a Philadelphus

The last few mornings, someone in a building behind us has been playing a wind instrument.  As I sit on the back garden bench reading and having my coffee, I can hear it drifting over the treetops. I romanticized it into some type of exotic Asian flute -- maybe played by a virtuoso of this obscure instrument, who otherwise plies his or her talents on stage in front of adoring multicultural fans.

But then I asked Dave about it, and he said, "Oh, that's just some kid fooling around with a recorder."

I'm not sure I agree with him. There's definitely a repeated pattern to the notes, which to me suggests deliberate playing, and this person plays for at least an hour at a time. I don't know why I think it sounds Asian, and I hope it's not offensive to anyone for me to say that, but it's definitely not "Row, Row, Row Your Boat." Listen to it in the video above -- while enjoying a serene corner of our garden featuring our gong wind chime and blooming Philadelphus, or mock orange -- and tell me what you think. 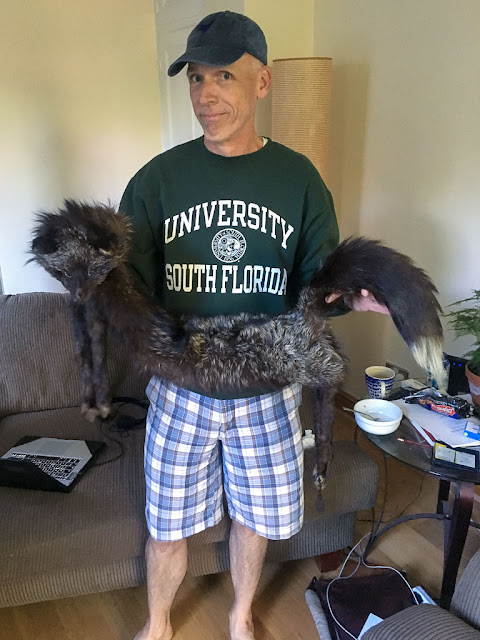 And here's another mystery.

Yes, that's me, and no, I did not kill that animal. But it is a real animal, or at least, it used to be. While walking Olga I found a discarded round hatbox-style suitcase, very fashionable in a sort of Linda Ronstadt "Lush Life" way. I looked inside, and it contained some vintage women's hats, including a nice red 1940s number with a Macy's New York tag. It also contained this fur stole, which was made to be clipped around a woman's neckline. You've seen photos of those types of furs before -- they used to be quite the thing. (You can still buy them, although I wouldn't advise it.)

Apparently it's a fox, and it's extra long because it's made from more than one. (I picked up that little fact here, a website for a museum where a nearly identical stole is on display.) Although it looks a little scraggly in the photo, it was actually in good condition.

As gruesome as it is to my modern sensibilities, I couldn't let that creature go out with the trash, could I? Some vintage clothing aficionado would be so into it! So I picked everything up, hats, suitcase and all, and later took it to Oxfam. I showed the workers there what the bag contained, so there would be no ugly surprises when they opened it.

Meanwhile, Dave couldn't resist taking a picture, because without a doubt this is one of the weirder things I've ever brought home.

Speaking of Dave, he got launched on his American odyssey yesterday, and last I heard he was in New York waiting for his connecting flight to Michigan. He's probably there by now, and probably sound asleep.
Posted by Steve Reed at 5:54 AM