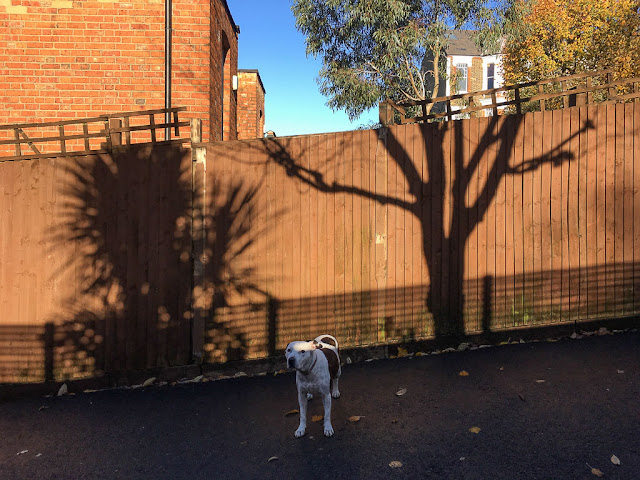 Yesterday was bright and sunny, an autumnal jewel of a day. Olga and I took a longish walk in the morning, and she patiently paused for me while I took photographic advantage of the shadows.

Then Dave and I were off to the Royal Free Hospital, where he had an examination scheduled. It's interesting that they chose yesterday, which was not only a Sunday but also Remembrance Day. The NHS works all the time, I suppose. We sat in the waiting room and watched the Remembrance Day ceremonies at the Cenotaph in Whitehall, with Theresa May and the other government and Commonwealth leaders laying their wreaths of poppies.

(By the way, this is an excellent gallery of photos from yesterday's ceremonies around the world. I find that image of poppies projected onto the Sydney Opera House especially beautiful and powerful. I'm glad Macron made a point of rejecting nationalism right in front of petulant Trump and conniving Putin.)

After Dave's name was called and he disappeared into the exam room, I walked to Starbucks and sat out on the sidewalk reading Derek Jarman's "Modern Nature," his journals from the late 1980s when he lived in Dungeness and tended a garden in the windy, salty environment. It's interesting reading, but it's also slow-going, I think because journals -- like collections of letters -- don't have the narrative drive of a novel. I've been reading this book for a couple of weeks and I'm only about a third of the way through. I like it, though -- his recollections of the Soho gay scene in the '60s and '70s, his references to his film and design work and the friends he loved and lost to AIDS, his descriptions of various plants and his efforts to grow them. He died from AIDS not too many years after the book's essays conclude.

Finally I went back to the hospital, collected Dave, and we came home. His exam went fine, and they seem to have some idea why he hasn't been feeling so great lately. This may lead to some treatment changes for his Crohn's -- he has a follow-up appointment in a week or two, so we'll see.
Posted by Steve Reed at 7:15 AM