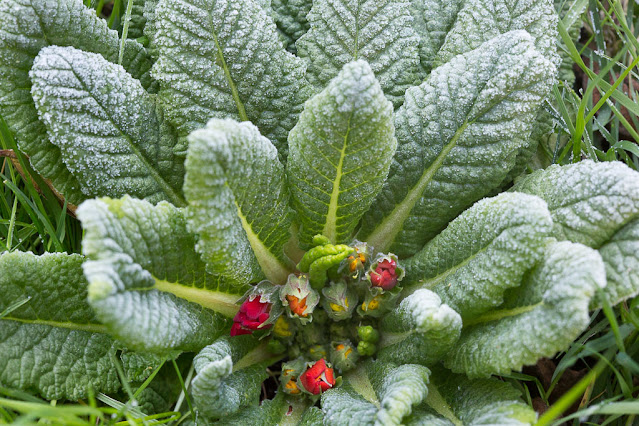 Well, the good news is, it looks like all the plants coped just fine with the frost. The geraniums are still inside -- I'll put them out today, at least until the weekend when it's supposed to get cold again -- but everything else pulled through. Even the azalea flowers.

This little primrose (above) is on the verge of blooming, and I'm sure it won't be slowed down by frost. Primroses don't mind the cold. 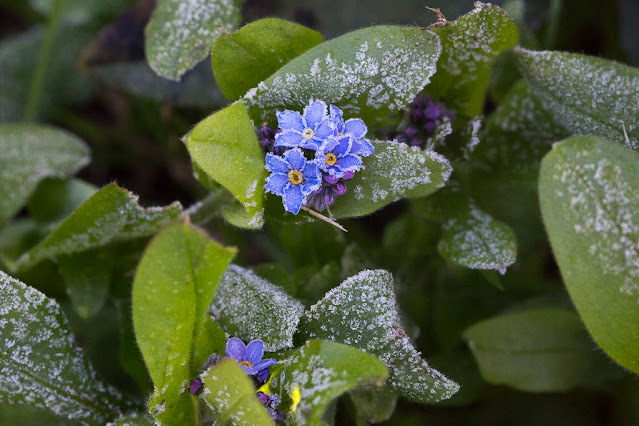 The forget-me-nots were unfazed, too. 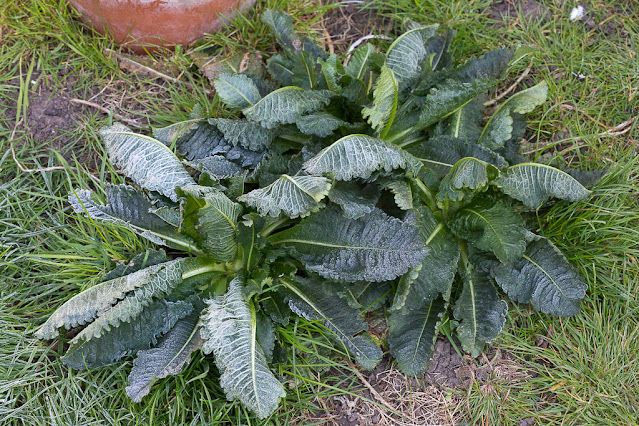 At first, the teasels looked a little battered and bruised (above), but as the day wore on they perked right back up. Of course, they're notoriously tough plants -- basically weeds. As my mother would say, "You can't kill 'em with a stick."

I accomplished basically nothing yesterday -- some minor housecleaning, some laundry. I went through my clothes, our books and our odds-and-ends and collected a pile of stuff that I plan to donate to charity when the shops reopen next week. I watched the movie "Magnolia," which is a perennial favorite of mine.

Olga, on the other hand, had a banner day. I let her out into the garden in the morning and the next thing I knew, she was wolfing down what looked like a frozen meat pie or burrito. I have no idea why it was lying in our garden -- probably the foxes pulled it out of someone's trash -- but she was thrilled and it was gone before I could stop her. There have been no ill effects.

Later, I took her for a walk and, on the next street over, found a pile of debris where some kids apparently sat on a curb doing whip-its (inhaling nitrous oxide, or laughing gas). There were ten open boxes of cream chargers, each containing 24 pellets, scattered all over the road. I picked them all up, put them in a plastic bag and carried them to the corner trash bin, and of course just as I arrived, the trash guys were there to empty the bin! Just my luck! These bins are routinely neglected, filled beyond overflowing, but when I show up with a bag of sketchy, embarrassing trash they're suddenly getting attention. I asked the trash guy if I could contribute my bag and he said yes, and I'm hoping he didn't look inside it and conclude that I'm a nitrous oxide addict. Not that he knows me or will ever see me again, but still.

I thought I might try to take a walk today, but I'm not sure how energetic I'm feeling and it's still freakin' cold out there. Maybe I'll knock down another Newbery book instead.
Posted by Steve Reed at 8:06 AM