Cricket -- Not The Insect 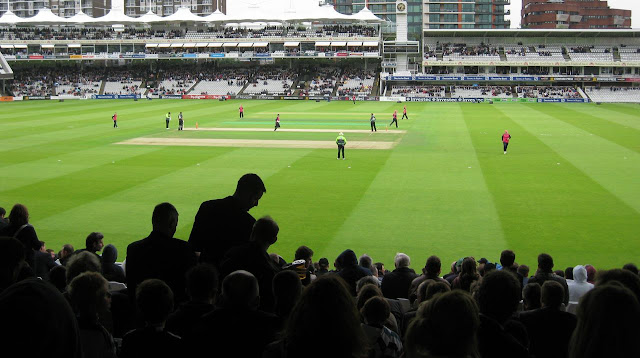 On Thursday evening, Dave and I waded into the great global tradition that is cricket. We went to Lord's Cricket Ground, which from what I gather is the Yankee Stadium of cricket -- hallowed ground to fans the world over. (Hey, down in front!) 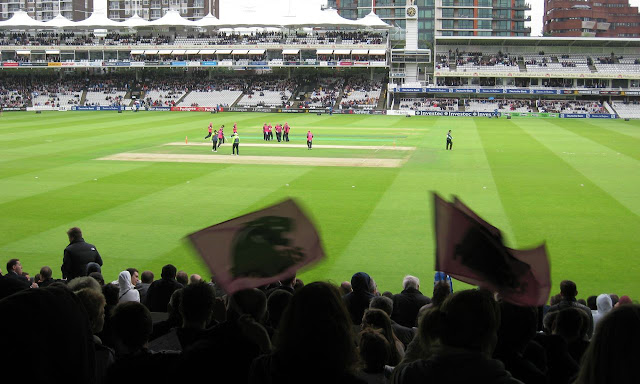 Before we went, I didn't know the first thing about cricket. All that batting and running between wickets was a mystery to me. Like many Americans, I suspect, I couldn't help comparing everything to baseball. But Dave's colleague Gordon, who plays cricket himself, was there to explain things to us.

Apparently the match we saw, between the Middlesex and Surrey teams, is a sort of abbreviated form of cricket. Test cricket matches, the more traditional form in which players wear whites, can go on for days, as I understand it. Our game was shorter and flashier -- there were flag-waving fans, sequined cheerleaders (!) and players in bright jerseys.

I shouldn't try to explain the game as I grew to understand it over the course of the evening. I know I'll get it wrong, and cricketers everywhere will protest. But I was fascinated by the fact that the game is played in the round -- when the batsman hits the ball, it can fly or roll in any direction, even behind him. The batsman's job is to defend his wickets, which the other team tries to knock down -- if they do, the batsman is out. 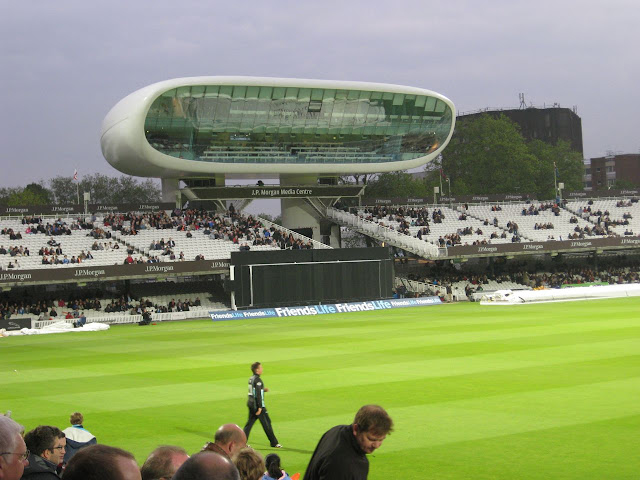 While we were watching the game, I was also trying to absorb some of the ambience of Lord's. This is the media center, which looks like a giant space-age Tic Tac. The hotel where Dave and I stayed when we first came to London is just across the street, and I remember wondering what the heck that big lozenge on stilts could be. 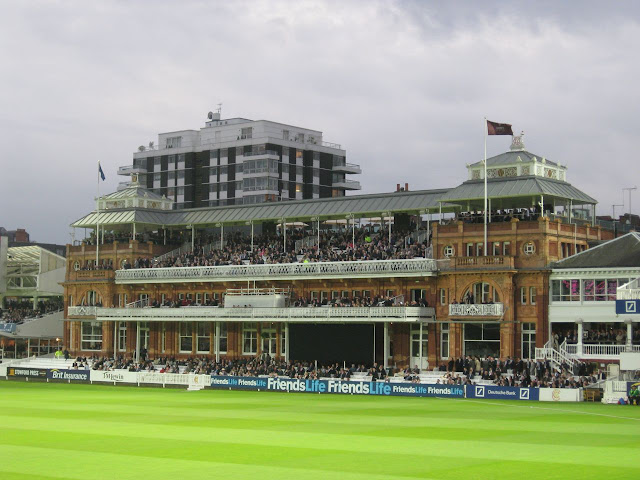 This is the Pavilion, which I believe is the oldest part of Lord's. Gordon said that's where the fancy people sit. Needless to say, we did not sit there.

The game was fun, but it was incredibly chilly -- 59 degrees with an even cooler wind. I brought a sweater and I was still freezing, despite consuming about half a bottle of cava. (We also brought boxed dinners. How great that fans can bring their own food and drink!) The game got postponed twice for rain, and finally Dave and I called it quits and went home during the second half. I have no idea who won.
Posted by Steve Reed at 7:56 AM

Hi Steve! You've been busy. I'm so happy you bought yourself a nice new Canon. Not that you needed it, you just deserve it. Have a good weekend. xoxo.

I grew up with cricket!!! When I was growing up, the west Indies cricket team was the best in the world. it was undefeated for 15 seasons, the only time that has ever happened in any sport. when cricket was being played, the whole country was united. everyone asked everyone on the street, what's the score? you stopped at traffic lights and saw a man with a transistor radio to his ear and a whole conversation about cricket would break out. It was the national passion! i played cricket myself in the backyard growing up with my brother and cousins. I was a mean fastbowler and knew how to put a spin on that ball! i had my share of cricket ball injuries too. that thing is like a brick. Ah, this post brings back memories.

What awesome photos, and such an interesting post! I don't know anything about cricket, either -- other than a book by Joseph O'Neill. Did you read that?

I always wondered what the point of cricket was.It seems mysterious especially compared with other sports, golf for instance...makes SO much sense! Thanks for the great shots of someplace I will never visit, curiosity quelled! Are you loving your new camera?

Laurie: Thanks for stopping by! I love my new camera! (These pictures, however, were taken with my point-and-shoot -- I didn't want to haul the big new one into a crowded cricket stadium!)

Angella: It's fascinating that cricket is such a huge cultural force throughout the former British empire.

Elizabeth: I didn't read that O'Neill book. I'll check it out!

Linda Sue: It DOES seem mysterious. And I do love the camera, though as I said above, these photos weren't taken with the new one.

Hah! I was about to comment on what great shots with the new camera these were until I read the comments to find out you used your old camera for these! :)

Don't forget that the original Yankee Stadium was recently demolished, along with the other 'hallowed grounds' of professional baseball, such as Comiskey Park and Tiger Stadium. Wrigley Field or Fenway Park would be better examples, and you'd better use them while you can because, at least in Fenway's case, the days are numbered.

I hate when historic stadiums are nuked for the new style Disney facilities. Gaudy.