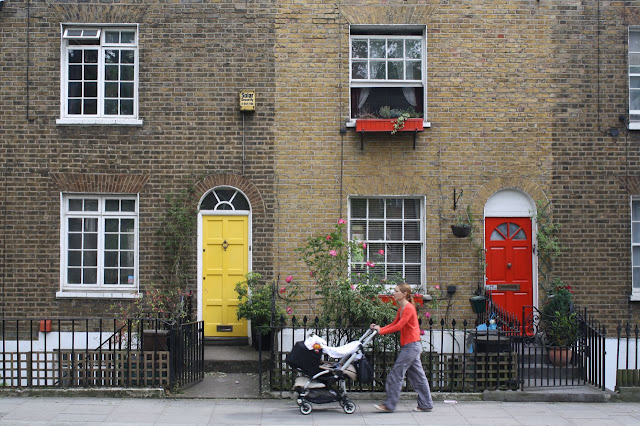 I read an article not too long ago that alleged fashion has grown somewhat stagnant. While clothing and hairstyles of previous decades fluctuated widely -- who can't roughly date a Joan Crawford movie, for example, based on the style of dress she's wearing? -- today's styles have been more or less the same since the early '90s.

Think about it. The '50s had their "New Look" flared skirts, the '60s their mod styles, the '70s their back-to-the-earth peasant skirts and shiny disco outfits -- not to mention all that hair. The '20s had their flapper shifts, the '80s their graphic prints, "Flashdance" sweats and shoulder pads.

But what have we had for the last two decades? Jeans. Khakis. T-shirts. When I look back at my own wardrobe it seems like an endless sea of Gap plaid and Banana Republic, broken up by the occasional paisley print or Goodwill find. (And Goodwill finds don't really represent current fashions, since they're often from an earlier time period!) Women's clothes have perhaps been slightly more variable -- but even there, I can't think of an item of women's clothing that was fashionable in the '90s that would seem particularly out of place now.

I could put on the same clothes I wore in 1991 and I don't think I would look dated at all. (Maybe just sillier, since my clothes back then were designed for a younger guy -- not someone leaning into middle age.) I still wear a few shirts I bought in the early 2000's.

What's going on? Have fashions fluctuated less because we're so much more casual now, and casual clothes are less subject to trends? Are we just more comfortable than we once were? Imagine that the photo above had been taken in 1995 instead of 2012 -- wouldn't that woman have fit in just as well?

I look like I just stepped out of a GAP commercial too. However, if I wore what I had on in 1991 I would look like a clown cause well much more adventurous with my clothes then. I was 10. :P

However, I do tend to agree with you that not much has changed. Well maybe boys pants aren't so baggy anymore. Boys clothing isn't as large. How about that one.

Glad to be back. Let's see if I can keep it up now.

Ms. M was 10 in 1991 & I had been married for a year - ha! And in fact I might have some of the clothes I wore that year even now. I had wondered why it seemed ok for me to go out in 10 year old clothes - it's because they look about the same!