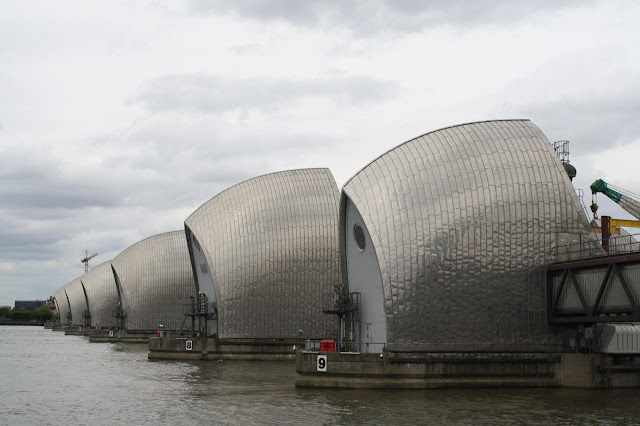 These strange metallic coccoons are the Thames Barrier, which spans 520 meters of the River Thames and protects the city of London from flooding. If there's a threat of a tidal surge from the ocean, the barrier's 10 steel gates are raised into position to keep the high water from reaching the city. 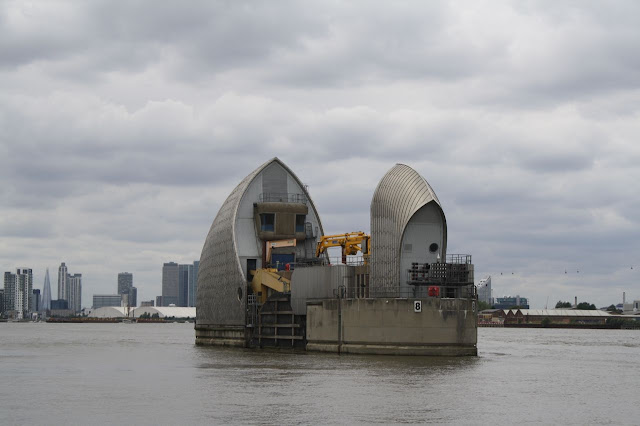 The barrier was built in 1982 near Greenwich, and there's a small park and information center there for visitors. Sarah and I went yesterday -- she wanted to see the Thames Barrier because it featured in an episode of "Dr. Who," though when we got there she said she didn't recognize it. (A lot of our sightseeing is being dictated by "Dr. Who." For example, we're supposed to go see a phone box somewhere near the Earl's Court tube station that most closely resembles the tardis. Who knew?) 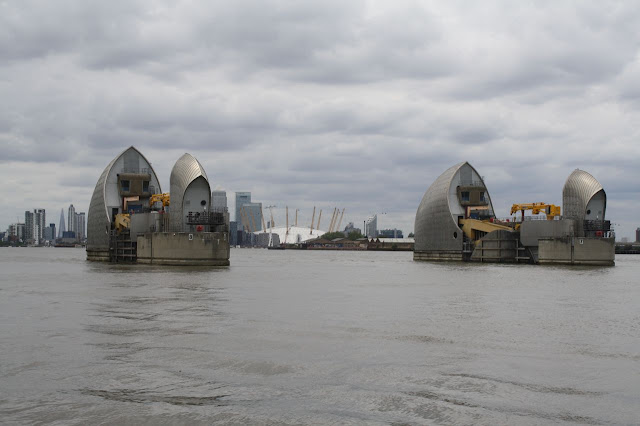 Here you can see the London skyline, including the pointy Shard on the left, Canary Wharf in the middle and the Millennium Dome, looking like a flattened sea urchin. After checking out the barrier we took the tube to Canary Wharf, another "Dr. Who"-related stop, which is mostly just a collection of modern glass-and-steel bank buildings. I felt like I was in Charlotte, N.C.

Then we walked along the south bank of the Thames and took a tour of the reconstruction of Shakespeare's Globe Theatre. We continued over the river on the Millennium Bridge, and past St. Paul's before catching the tube to meet Dave near Regent's Park. The three of us had dinner and went to a brilliantly surreal and bawdy outdoor production of "A Midsummer Night's Dream." It rained pretty steadily right up until curtain time, but the rain miraculously stopped just in time for the show, so we didn't have to endure rescheduling and all that rigmarole. Whew!
Posted by Steve Reed at 7:06 AM

Sounds like a fun day of sightseeing! Are you not a Dr. Who fan? :)

The barrier structures are really cool looking. Do you know if they've ever been put into use?

Funky looking! We watched Doctor Who for a while, but stopped when they killed off a character we liked (Rory - although I think maybe he came back?).

You're right about Charlotte! One of the most uninteresting downtowns ever :)

WOW I missed those1 We went down the Thames twice- must do so again. Your shots are great! It is so cool to see though your lens!
London is such a fun town. Walking is great and , really, it is no more expensive than anywhere else if walking is considered an option...the streets are very entertaining!
Not too sure how London will handle the Olympic crowd...that could be a disaster.

Lynne: It's not that I'm not a fan, I just never took a position on Dr. Who. I never really watched it. Sarah, however, is a BIG fan.

Bug: Hmmm...I asked Sarah for the lowdown on Rory, and she said, "He's died like three times."

Linda Sue: Yeah, I am not thrilled about the prospect of the Olympics, but I think the key is walking, avoiding public transport and (obviously) avoiding heavily affected neighborhoods. I'm hoping our end of town -- which is across the city from the Olympics site -- won't feel too much impact. Then again, I live on Portobello Road, and I'm sure every Olympics visitor will want to go to the market! Ugh!

Your comment about Canary Warf made me chuckle. That is almost exactly how I felt when I visited there. It looked like any other large American city.

i love the idea of dr. who inspired travel!

the first shot of the barriers is stellar...well, they all ate but that one really shows how artful something like flood protection can be.

i don't know if it is just me but i have a devil of a time with your new "please prove you're not a robot"...i got rid of word verification the blogger spam filter seems to catch all the crap.....

Sorry about the word verification, Kim. It drives me crazy too. But when I took it down briefly a couple weeks ago I got spammed. :(

Lv Dr. Who! These structures are fabulous and I can see why they used them in an episode.