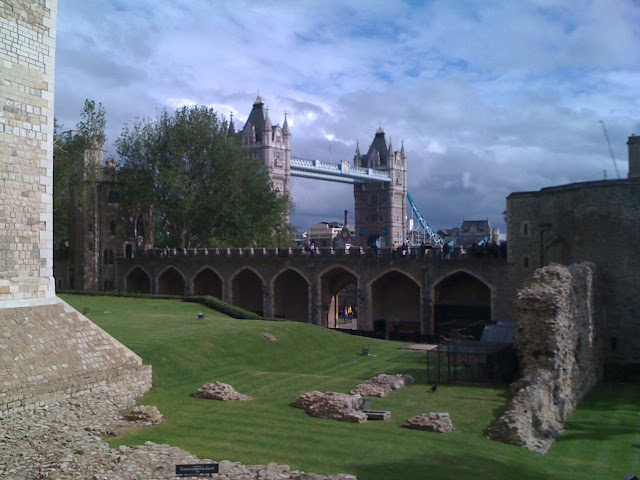 Sorry for the crappy photos today -- our collegiate visitor Sarah and I went to the Tower of London yesterday and I didn't feel like lugging my real camera. So these are all iPhone shots -- pretty good for a phone, but only OK for a camera.

I'd been to the Tower once before, nine years ago. But this was a first for Sarah, and obviously if you're visiting London the Tower is a must-see attraction. So we made the trek.

The photo above shows a corner of the White Tower (left), which dates from the time of William the Conqueror. It can be a little difficult to wrap your brain around the fact that you're standing in a building with a functioning Norman fireplace! 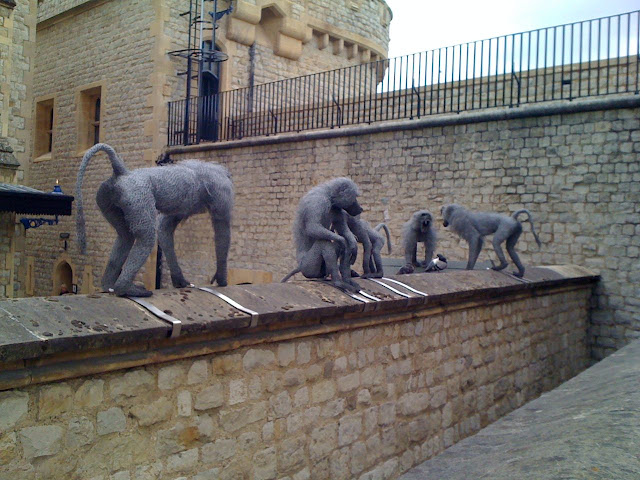 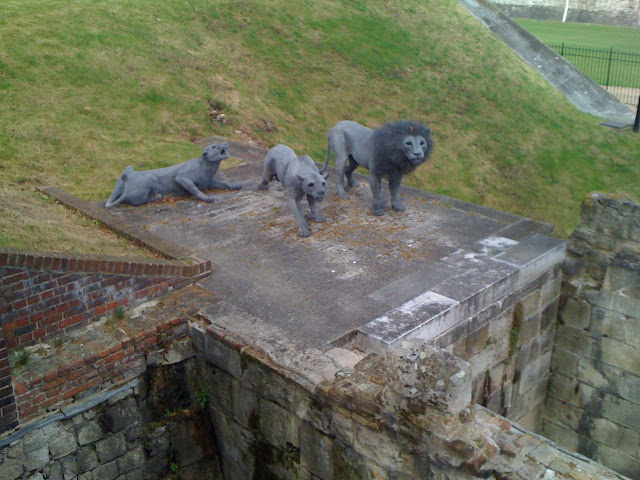 Lions and baboons made of chicken wire were prowling around the Tower site. These are sculptures by artist Kendra Haste, being shown as part of the Tower's Royal Beasts exhibit (which I must confess we did not see).

An aside: I was very sorry to hear about the death of Ray Bradbury -- at least, as sorry as I could be about someone who died at age 91. I eagerly consumed his books as a teenager, and "The Martian Chronicles" remains an all-time favorite. In the late '90s I wrote a newspaper column about Bradbury, critical of the fact that "Chronicles" had been re-issued with updated and slightly revised text. I argued that such an important work should have been held sacrosanct. To my surprise, Bradbury called me to make his case that revisions were acceptable to keep the work current, and keep readers enthusiastic about the promise of future space travel. I didn't entirely agree, but he was a nice guy, and I wrote a second column giving him vent. Getting a call from Ray Bradbury remains one of my best journalism memories.
Posted by Steve Reed at 6:41 AM

Wow! That's an awesome encounter -- and seems so fitting for the guy! Thanks for sharing it with us.

I was also a fan/reader and since reading about his death, I've decided to re-visit his books. Great that he called you and got a second column.

So cool to get a call from the man himself!

I really should visit London properly someday - so I can say that I've seen more than the train station, a Salvation Army hostel, and a random Pizza Hut.

DANG Dude- you got the call1 Geez- I want to have a photo of the ear that he talked into please!
I skipped the towers twice this time- so sorry i did- I would have loved to see the animals...The towers is always such a sad place to me- I see ghosts of bloody heads- I hear moans and screams and utterly broken souls.
Your photos are great! it is not the camera so much as the photographer, you know! You could most likely make a pinhole camera work well!

Wow, these are so not crappy pictures. It look fabulous.