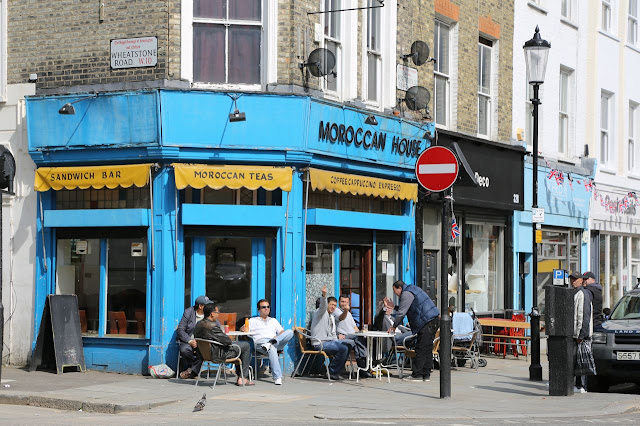 On Wednesday, I bought that new camera. Joy, joy, joy! It's a professional Canon with lots of resolution and some really terrific amenities, like the ability to take HDR photos and video. I could barely contain myself while waiting patiently for the battery to charge before taking it on its first outing.

I went out to Portobello Road and walked north for a couple of miles. I've shot this Moroccan cafe on Portobello several times. But this time, as I stood on the opposite corner and raised my camera, two guys in front of the cafe started cursing at me and flipping me the finger. I told them I was just taking a picture of the building. "There are people here!" one guy yelled.

Well, there are people all over the street, everywhere. In an urban environment it's hard not to take pictures with people in them. The fact is, if you're sitting outside in a public place -- especially on a major street populated by lots of camera-toting tourists -- you could wind up in a picture.

If you'd rather not be photographed, guys, just look down, or look away. Don't be nasty and make a stink that will guarantee you prominence in a photo. 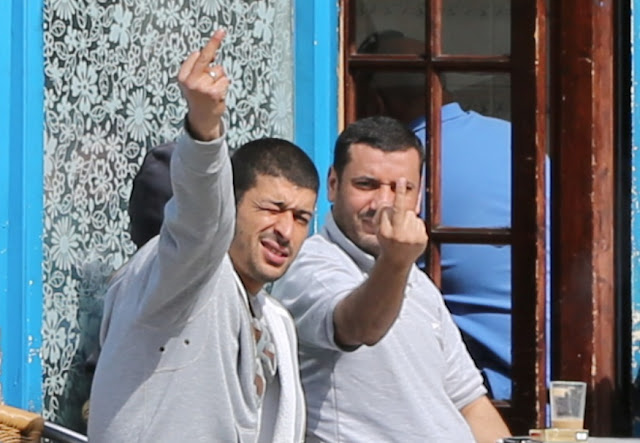 See what I mean?

(And how about that resolution?!)
Posted by Steve Reed at 6:24 AM

*later on the blog...* "Here's a picture of two complete idiots sitting on a street corner in broad daylight having a tantrum about having their picture taken."

I should also point out that this little bit of taunting hi-jinks proves that we are in fact related after all! You little rascal, you.

They definitely got what they deserved. What is it that people are so worried about, really? Glad to see you continue to hone your photography skills!

Perfect resolution if you ask me!!

That is hilarious - and a perfect baptism for your new camera :)

RIGHT ON, bro! that is how I felt in Venice! "no Photo"...oh you mean like this *click*...Now I have camera envy- resolution is brilliant! I do like cameras with batteries that do not require recharging- I know it is probably not earth friendly BUT!...
Great shot of those jerks- they are probably up to no good...

You know, I hate to be small about this. I know that muslims in the Western world face all kinds of pressures from law enforcement, with racial profiling and whatnot, and these guys may have had reason to suspect I was up to something taking their picture.

If they had simply ASKED me not to photograph them, I'd have been more than happy to comply. If they'd ignored me I probably wouldn't have even used this photo online. But start yelling "f*ck you" and giving me the finger, and all bets are off!

I was doubly offended having lived and worked in Morocco as a Peace Corps volunteer for two years. I don't know whether these guys are Moroccan or not, but I love Morocco, and it really bothered me to get such an ugly reaction.

Congrats on the new camera! Everybody else's comments kind of mirror what I would have said! :)