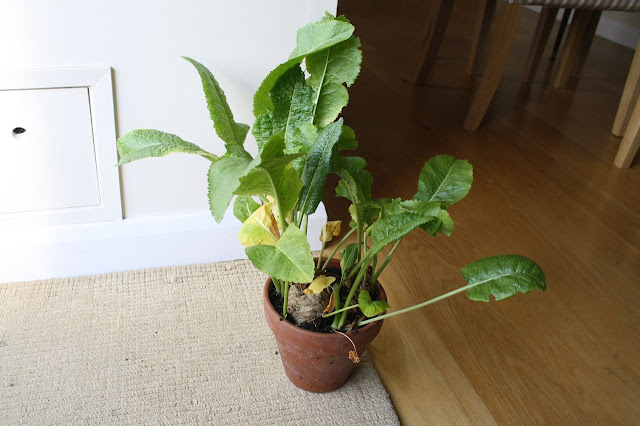 Here's our horseradish plant, which you may remember grew from two bits of root we planted in a pot. It's become quite large and leafy, and it had even more leaves before I removed some for culinary purposes. (Read on!) 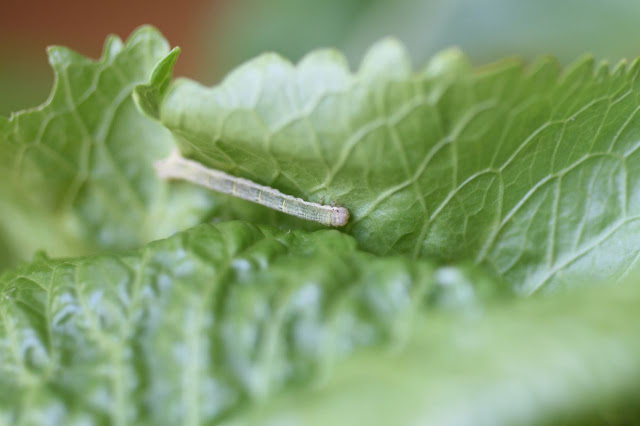 Before I discuss our own eating habits, though, I have to mention this guy. Actually, there are three of them -- some kind of green caterpillar-slash-inchworm critters, munching away at the leaves of our horseradish. I decided to leave them alone for now, thinking they'll eventually become moths of some sort. (They look like they might be peppered moth caterpillars.) They're not doing too much damage -- just leaving holes in leaves here and there. I can live with that.

Isn't it amazing that some insect found our horseradish plant on our sixth-floor balcony, and chose it as a nursery? 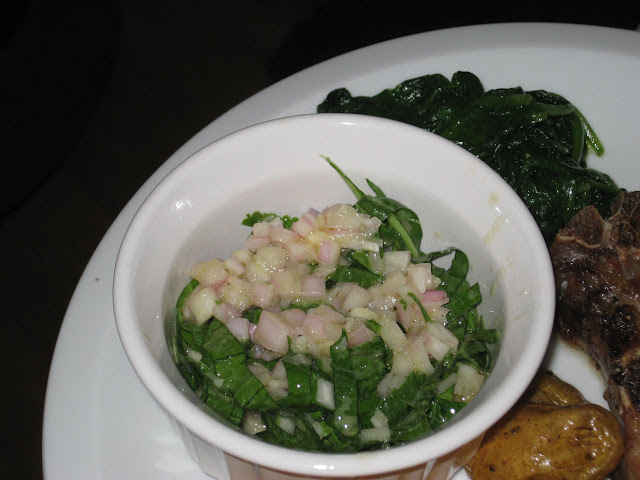 Anyway, as I said, I removed some of the horseradish leaves so we could eat them ourselves. Dave first did some research on whether horseradish leaves are edible, and it turns out they are. So I cut five or six, transferred one wayward caterpillar back to the plant, and washed the leaves thoroughly to ensure we weren't consuming any of his siblings. Dave then chopped the leaves and added shallots and dressing to make a salad, which we ate with pork chops. The leaves taste vaguely of horseradish, though also more green and nowhere near as strong as the root.

Here we are in London, growing our own food! I feel like Oliver Wendell Douglas on "Green Acres," growing vegetables on his New York City balcony (before he could convince Lisa to leave her penthouse view and move to Hooterville). I don't think we'll be buying a farm anytime soon, though.
Posted by Steve Reed at 6:11 AM