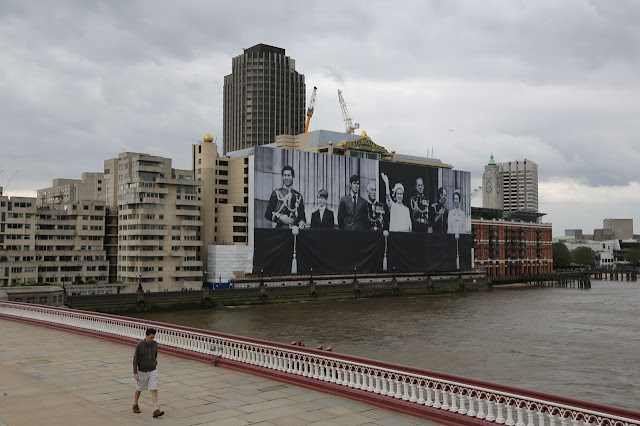 My stepsister Jennifer and nephew Jesse are visiting from Florida, and for the last few days we've explored the city. On Friday I took them on a walk around our neighborhood, including a visit to the graffiti yard at Trellick Tower. (I can just hear my dad: "Where did you take my 14-year-old grandson?!") We explored Portobello Road market and had Indian food for dinner.

Then, yesterday, Jennifer bought tickets for one of those open-top bus tours around the city. The first 3/4 of the tour was fabulous -- I learned lots of things about London neighborhoods that I never knew, such as the location of Margaret Thatcher's house and the origin of the Great Fire of London. The last quarter of the trip was horrendous, as a frigid wind blew in gray, rainy-looking clouds. Note to self: Open-top bus tours are a very bad idea on unseasonably chilly days. (It was in the 50s yesterday, and I have been insistently wearing shorts -- so maybe it's my own fault that I got cold, but it's summer, dammit.)

Jesse, being 14, was sick of the bus trip almost from the moment we set out. His mantra on vacations is, "Can we go back to the hotel now?" He wants his YouTube, his television and his big double bed. By the end he was practically catatonic with boredom. He did not appreciate sights like the world's largest photo of the royal family (above), installed on a riverfront building for the Queen's recent Jubilee flotilla. After we finally disembarked, we managed to find a pub for some lunch and then went out on the river itself, in a boat that, thankfully, was covered and served coffee -- and took us right back to Jesse's hotel room.

Dave comes back from his conference in Rhode Island today -- yay! -- so he'll be able to join us on upcoming sightseeing expeditions.

And speaking of Dave, you may remember me writing about a scaffolding collapse in our neighborhood during a windstorm several weeks ago. Well, we've learned more about the new Jamie Oliver restaurant soon scheduled to open at the site of that mishap -- it's called Recipease, and apparently it includes a kitchen shop and will offer cooking lessons. A certain someone (named Dave) will definitely want to check it out!
Posted by Steve Reed at 6:52 AM

I have an almost-fourteen year old boy myself, so I can imagine!

And are you going to be there for the Olympics?

We'll be here, but we're steering clear of the games! Unfortunately we'll need to wade into the tourism scrum, though, because we have visitors around that time.

Gee, when I was fourteen, I loved tromping around London...Must be a boy thing, or maybe the lack of Internet in my youth was a blessing...

I suspect it is partly a boy thing, but Jesse is also "on the spectrum," as they say. He marches to his own drummer!

I was wondering if it was overwhelming for Jesse, trying to process so much new information.

Our summer is the same as London't summer- it is freezing! Nice that you have such interesting and amusing distractions there- I only have ...glue. Jesse will remember the trip in the back of his mind and someday want to return to take full advantage of what you have done with him...that's the way it works i think- I remember being thirteen- going to the wold's Fair- thought it was a dump- it was the most impressionable event ever- had to move here!Still love the space needle!
Your neighborhood is becoming POSH!

Love the shot from the bus! Great composition with the lone person walking, so small against the HUGE royal family. Also the added texture of the bridge posts. Super!

Maybe kids today just have a different level of entertainment? ;)

We have several recipes of Jaime's that we love. How cool to be just down the street from a restaurant from his that offers cooking classes! I'm sure Rick would be down there with Dave. Fun name for his restaurant too!

Wow, you've had lots of company!

Reya: Jesse does prefer the familiar. But the funny thing is, as Linda Sue said, he remembers trips he takes and he talks about them enthusiastically afterward. So even when he seems overwhelmed, he's taking it in.

Linda Sue: I love the Space Needle too!

Lynne: And the fun has just started. We have several more visitors scheduled before school starts again in August -- plus a few short trips of our own. Whew!

Ok that picture is a riot, I just love it.

BTW,"His mantra on vacations is, 'Can we go back to the hotel now?'" soooo reminded me of myself at that age.

Thanks for the laugh. :)