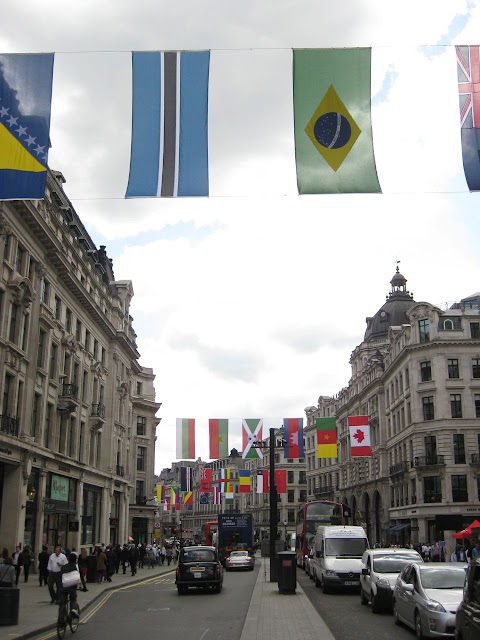 The same part of Regent Street that was recently aflutter with Union Jacks is now flying flags of the world. I assume this is for the Olympics, London's next major civic hurdle, which begin July 27 and run until August 12.

Dave and I don't have tickets to any Olympic events. We talked about trying to get some, but despite our recent cricket outing, we're not really sports people. I never even watch the Olympics on TV. So it seemed silly to try to go.

Besides, the Olympics dates overlap with visits from our New Jersey friend Adam, in early August, and from Dave's parents, who depart London just after the opening ceremonies and then return a few days before closing ceremonies. (They're cruising the Mediterranean in between.) So we'll have plenty to do!

I did get to see the Olympic medals, which are on display at the British Museum. They're huge.
Posted by Steve Reed at 7:01 AM

I love the idea of civic hurdles. We have them here in DC all the time - marches, demonstrations and such.

The best seat for the Olympics is in your living room! That way you can pick and choose what you watch and change the channel if you are not interested!

The pageantry of the Olympics fits in well with the British culture.

We saw the medals as well- I thought they were silly- oversized in cartoony fashion, don't you think? London will be , um, interesting challenge getting around the central area- so many people! I think that it might be a good time to go to Ireland, or Wales....or any other where!